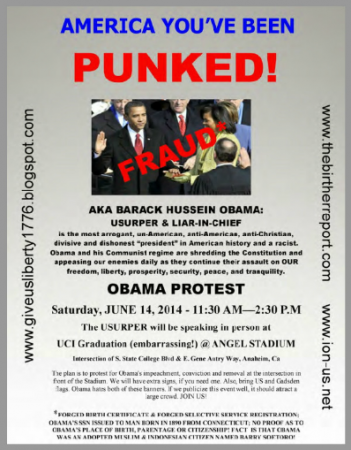 (Jun. 5, 2014) — This month the University of California at Irvine will hold its annual commencement ceremony at Angel Stadium.  The speaker they invited to help direct their new graduates off to a life of liberty, financial success, democracy and freedom, is one who believes in absolutely none of that.

The speaker they have chosen has an impressive history. One needs to ask which of the following accomplishments and personal characteristics the people sitting on the UCI Board of Directors are most impressed with and would like to see their graduating students emulate?

Many of us know this is just a partial list of his credentials. But this compilation should give UCI officials a sufficient list of attributes that they would chose to have their new graduates take with them through life.

TPATH supports this demonstration and the organizations which are planning it.  The University needs to know that despite the title the man holds, his values, his life of obfuscation, his crimes and his attempted destruction of a great country, preclude any desire one might otherwise have for our young people to emulate anything he does or stands for.

Email it to your lists, your friends and families.

It is time for America to stand up and let that usurper and those who would hold him up for something he is not, nor will he ever be, know that we have had it.  Enough!  Enough leading our country to moral and economic regression and enough leading our children down that same path.

You can download the PDF for the demonstration by clicking here.  Please keep in mind that this protest will be respectful to those who may be there and respectful to the University.  But signs and banners letting all know just how you feel are not only allowed, but desired.