AIDING AND ABETTING THE ENEMY?

(Jun. 3, 2014) — A video apparently uploaded to YouTube in early April 2010 shows then-captive Sgt. Bowe Robert Bergdahl pleading to be rescued so that he can “go home.”

The video is described by its producers as “Video of an American soldier Bowe Robert Bergdahl impresonde by the Mujahideen of the Islamic Emirate of Afghanistan” [sic].

Bergdahl’s captivity was not widely known, and the Pentagon reportedly asked major news services not to mention his name.  Soldiers in his unit reportedly had to sign non-disclosure agreements about his absence.

The events surrounding Bergdahl’s capture are as yet unclear since he was rescued by U.S. Special Forces on Saturday.  As a result of an agreement made by the Obama regime with the Qatari government, which acted as an intermediary for the Haqqani network holding Bergdahl, five “high-ranking” prisoners at Guantanamo Bay prison were exchanged for Bergdahl.

On Fox & Friends on Tuesday morning, Judge Andrew Napolitano stated that Obama “aided and abetted the enemy” of the United States by knowingly turning over highly-valued Taliban prisoners.  The Taliban is reportedly rejoicing over the prisoner exchange.

Napolitano has made the charge previously against Obama.  The U.S. Constitution allows for impeachment in the House of Representatives and removal from office if convicted by the U.S. Senate for “high crimes and misdemeanors.”

Whether or not Obama is qualified to serve or attained his office by deception has not been made fully transparent to the American people.  According to radio host Peter Boyles, at least one member of Congress has quietly acknowledged that all congressmen are aware that the scant documentation Obama has shown to the public is fraudulent after a criminal investigation determined that his long-form birth certificate and Selective Service registration form are “computer-generated forgeries.”

Congress has not taken action on the findings, declared more than two years ago.

Mainstream news reports since Bergdahl’s rescue have quoted former members of his unit as having described Bergdahl as “a deserter.”  Soldiers familiar with the circumstances of Bergdahl’s disappearance reported that “six soldiers were killed during searches for Bergdahl.”

According to deceased journalist Michael Hastings, Bergdahl became disillusioned with the Army mission in Afghanistan even before his deployment and decided to “walk away” from his base on June 30, 2009. Hastings reported that when Bergdahl joined the Army in 2008, entry standards had been lowered to the point at which felons and drug users were accepted.

Speaking with the BBC as reported by Breitbart on Monday, a sergeant who served with Bergdahl said that the unit was “threatened with legal repercussions if they spoke about Bergdahl.”  He told the interviewer that “Bergdahl was a deserter, and soldiers from his own unit died trying to track him down.”

Following news of Bergdahl’s recovery and the prisoner swap, House Armed Services Committee Chairman Buck McKeon issued a statement accusing Obama of violating a law he signed in early 2013 which mandated a 30-day notice to Congress before prisoners could be released from Guantanamo Bay.

National Security Adviser Susan Rice, who lied to the public about the cause of the terrorist attack in Benghazi, Libya on September 11, 2012 which killed four Americans, appeared again on television to say that “Bergdahl’s health and safety were in danger” such that the regime “did not have time” to notify Congress before it acted.

Former putative Defense Secretary Leon Panetta had said that there was “not enough time” to mount a rescue mission to save those killed and injured at the Benghazi mission, although his claim has been highly criticized by former military commanders.  In response to Panetta, Lt. Gen. Thomas McInerney told Lou Dobbs, “We never leave people behind.”

Plans for Bergdahl’s release have been in the making since at least 2011.

In the video, Bergdahl talks about his family, his former hobbies, and his former assignments in the Army.  He regretted not showing more “love” to his family.  “I love my family; I love my friends…” he said.  “…I miss them, I love them, and I pray to God to see them again,” Bergdahl said.  In halting sentences, he then said, “This war isn’t worth the waste of human life that it has cost both Afghanistan and U.S.  It’s not worth the amount of life that has been wasted in prisons: Guantanamo Bay, Bagram, all those places where we are keeping prisoners.  I’m a prisoner; I want to go home.  The Afghanistan men who are in our prisons…they want to go home, too.”

In a droning voice, Bergdahl continued, “Every day I want to go home…release me…please, release me…bring us all home, back to our families, back to my family…please…bring me home, please.”

CNN identified the video as having been issued by the Taliban.  In a report which the family posted on its website “BringBoweBack,” the CNN anchor stated that Bowe appeared to be “in declining health” in a new video reportedly released on December 14, 2013.

On the day of his rescue, Bergdahl’s father, Robert, posted a link on his Twitter page to an article on the website of the Islamic Emirate of Afghanistan which puts forth anti-Western propaganda and asks, “Is America disengaging from Afghanistan or changing nature of the battle?”

The Islamic Emirate of Afghanistan was declared by the Taliban when it seized control of the government in 1996.  During its five-year reign, it reportedly committed “systematic massacres against civilians.”

One of the reasons the article cites as the U.S.’s desire “to keep the war incessant” is:

So that an Islamic government is not formed and Sharia Law is not implemented inside Afghanistan once again.

During the reign of the Islamic Emirate, Afghanistan was the sole state where Islamic Sharia was implemented in its real sense and which was not following the political and legal criteria of the west. Even today, throughout the world, no state and system can be found which is not run, wholly or partially, on the political, military, economic and legal criteria of the west.

Taliban who want to organize their politics, economics, law and order according to Islam are not ready to compromise on these things with anyone. Therefore it is natural that the west will continue their war against them so that this country could not avail stability for having a system which is based on the criteria of Islam and may not comply with the atheistic standards of the west.

A website detailing women’s plight under the Taliban’s rule in Afghanistan during the 1990s reports:

The Taliban, an extremist militia, seized control first of Herat (1994) and then Kabul, the capital of Afghanistan, on September 27, 1996 and violently plunged Afghanistan into a brutal state of totalitarian dictatorship and gender apartheid in which women and girls were stripped of their basic human rights…

Upon seizing power, the Taliban regime instituted a system of gender apartheid effectively thrusting the women of Afghanistan into a state of virtual house arrest. Under Taliban rule women were stripped of all human rights – their work, visibility, opportunity for education, voice, healthcare, and mobility. When they took control in 1996, the Taliban initially imposed strict edicts that:

Women were brutally beaten, publicly flogged, and killed for violating Taliban decrees. Even after international condemnation, the Taliban made only slight changes. Some say it was progress when the Taliban allowed a few women doctors and nurses to work, even while hospitals still had segregated wards for women. In Kabul and other cities, a few home schools for girls operated in secret. In addition, women who conducted home schools were risking their lives or a severe beating.

Brutality against women continues in Afghanistan despite the U.S.’s 2001 invasion aimed at toppling the Taliban, which also hosted Osama bin Laden, known to be the mastermind of the attacks of September 11, 2001 which killed nearly 3,000 people in New York, Pennsylvania, and Washington, DC.

On June 1, the elder Bergdahl posted a link to a video of a Tunisian family whose relative has been imprisoned at Guantanamo Bay, Cuba, for the last decade.  Family members say their relative is not a terrorist.

On May 28, the elder Bergdahl had issued a tweet sympathetic toward freeing “all Guantanamo prisoners.”  On Sunday, former Rep. Allen B. West reported that the tweet had been removed from Bergdahl’s page, but it appears in the recipient’s twitter feed: 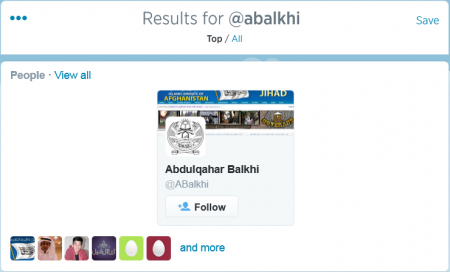 The recipient of the tweet, “@ABalkhi,” appears to be associated with the Islamic Emirate or the Taliban. As reported by The Washington Post on Monday, sourcing a story from 2011 in The New York Times, Abdulqahar Balkhi is “a Taliban representative, who…wrote under the handle @abalkhi…” 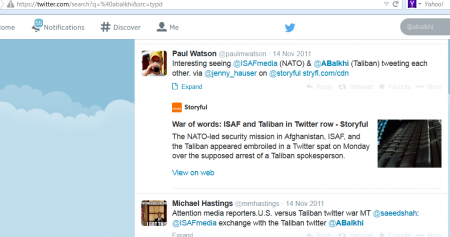 It’s unclear why this particular tweet was deleted: A spokesman for the family told The Post on Monday that Bob and Jani Bergdahl were asked by the media about the now-missing message upon their return to Idaho from Washington. But the Bergdahls didn’t discuss it.

“They just nodded their head in acknowledgement of the question, but they didn’t address [it] in their remarks,” said Col. Timothy Marsano, the family spokesman.

During their long, painful wait for their son’s safe return, the Bergdahls have vacillated between quiet, consistent remembrance and outspoken activism.

After his son’s capture, Bergdahl appeared to pour himself into an effort to find solidarity with his missing son. He grew a long beard and learned Pashto and Urdu, languages spoken along the Afghan-Pakistan border.

And it has been no secret that he offers compassion to his son’s captors.

“Strangely to some we must also thank those who have cared for our son for almost two years,” Bergdahl said in the 2011 video message to the Taliban. “We know our son is a prisoner and at the same time a guest in your home.”

Blogger Debbie Schlussel, who correctly claimed that Obama’s Selective Service registration form is a forgery in 2008, before Obama was inaugurated, reported that at the press conference on Saturday, Bergdahl was not speaking Pashto, but rather, Arabic, and that he said, addressing both his son and “to the people of Afghanistan” from the White House lectern, “in the name of allah the most gracious, the most merciful.”

A screenshot posted by an observer of AlBalkhi shows him glorifying an Islamic fighter, termed a “hero,” who shot dead 7 American invaders on 4th July in Maidan Wardag.” The Post & Email was able to find a possible event, a July 8, 2012 attack in the Wardak province, in which seven service members were killed, although reportedly by an IED. 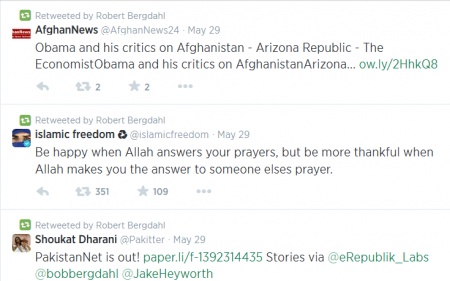 Both Bergdahl men have been called “traitors” on Twitter as a result of Robert Bergdahl’s Twitter comments. 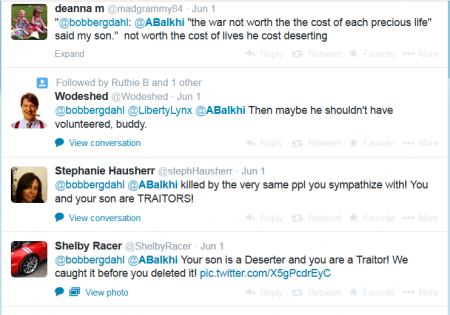 In ABalkhi’s Twitter feed, a commenter stated that one of the five Islamics freed from Guantanamo Bay in exchange for Bergdahl was “commander of”the Haqqani Network which held him. 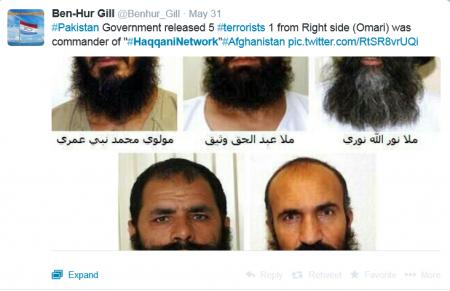