IN FACT, MORE ATMOSPHERIC CO2 WILL SPUR CROP GROWTH – IF WE LET IT 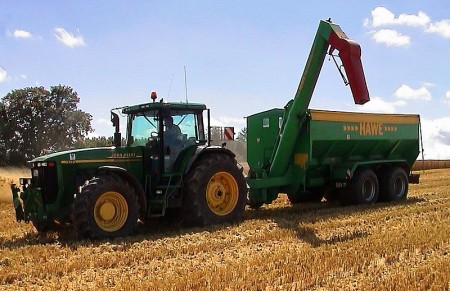 (May 31, 2014) — Historian Geoffrey Parker is the author of Global Crisis: War, Climate Change and Catastrophe in the 17th Century. In a recent opinion piece, he suggested that the desperate climate from 1600 to 1700 is a template for human collapse in our twenty-first century. There are two massive flaws in his theory.

Almost all past agricultural and cultural collapses occurred during “little ice ages,” not during our many global warm periods. In addition, today’s seeds, fertilizers and modern farming techniques and technologies are far superior to anything mankind possessed during previous crises.

The seventeenth century was part of the 550-year Little Ice Age, the most recent of at least seven “little ice ages” that have befallen the planet since the last Pleistocene Ice Age ended some 13,000 years ago. Studying sediment deposits in the North Atlantic, Gerard Bond of the Lamont-Doherty Earth Observatory found such centuries-long “little ice ages” beginning at 1300 AD, 600 AD, 800 BC, 2200 BC, 3900 BC, 7400 BC, 8300 BC, and perhaps at 9100 BC. In fact, these worldwide Dansgaard-Oeschger disasters arrived on a semi-regular basis some 600 times over the past million years.

Each of these icy ages blasted humanity with short, cold, cloudy growing seasons, untimely frosts, and extended droughts interspersed with heavy and violent rains. Naturally, their crops failed. Humanity’s cities starved to death, repeatedly – with seven collapses in Mesopotamia, six each for Egypt and China, two for Angkor Wat and at several calamities in Europe.

The early cultures gave the illusion of continuity: the Nile and the Yangtze always had at least a little irrigation water. However, “little ice age” hunger and disease drove human and animal migrations across thousands of miles and over continents, led to major invasions like the Huns into Europe’s Dark Ages, and caused the collapse of kingships and ruling dynasties around the globe.

While acknowledging the existence of the cold, chaotic periods, the Intergovernmental Panel on Climate Change has barely factored them into its computer models. The IPCC seems to think it is just coincidence that our warm and relatively stable Modern Warming directly followed the latest awful Little Ice Age.

Moreover, our recent climate has been more stable than the chaotic “little ice ages.” Iraq has not had a three-century drought recently. The Volga River Valley has not been too flooded to farm for 700 years, as happened after 600 BC. British logbooks show the Little Ice Age featured more than twice as many major hurricanes making landfall in the Caribbean, compared to the twentieth century.

Parker mentions three possible driving forces for the seventeenth century collapse: volcanoes, El Niños, and the sun. There’s no cycle in the volcanoes, however, and the El Niños are too short – rarely lasting more than a year or two. That leaves the sun, and the powerful influences it has on Earth’s temperature and climate.

Indeed, Parker’s own book focuses on the Maunder Minimum (1645–1715 AD), the solar cold cycle that existed during and caused the depths of the Little Ice Age. During this time, the sun had virtually no sunspots for 70 years, significantly reducing the crop-growing warmth reaching our planet, while producing long periods of horrendous storms and floods that killed crops and ruined harvested grains.

We must compliment Parker for recognizing that the climate was the key to these global crises. He fails, however, to acknowledge that this has been a recurring pattern.

With this omission, Dr. Parker draws the wrong conclusion about the threat to future societies. There is no visible reason to expect famines today due to carbon dioxide, which improves plant growth for crops, forests, grasslands and algae, as atmospheric CO2 levels increase.

The danger is the cold, chaotic weather of the “little ice ages” themselves. That will shrink agricultural zones and shorten growing seasons. Another such icy period is inevitably coming, though not likely in the next two centuries, if past cycles are an accurate guide.

Regardless, for the next 20-25 years, humanity will likely be in another cooling period, caused by the sun’s reduced energy output and the Pacific Decadal Oscillation. We are about 150 years into the modern warming. Since the shortest of these warm periods during the Halocene was 350 years, and they generally last 350 to 800 years, it is unlikely that we will enter another Little Ice Age for a couple more centuries.

But even a prolonged cooler period (akin to what Earth experienced 1860-1900 and 1940-1975) could create problems for some crops in some areas: such as grapes in Washington, Wisconsin and Great Britain. Mostly, though, modern crops and agricultural practices can handle colder weather and shorter growing seasons reasonably well – and certainly much better than was the case for previous generations of humans during previous colder spells.

Dr. Parker nearly redeems himself by making the most valid point of all. We now have science and transportation to deal much more effectively with that coming “little ice age.” Our biggest advantage is our modern high-yield agriculture. Today we harvest perhaps six times as much food per acre as the desperate farmers of the seventeenth century, and our yields keep rising, thanks to scientific breakthroughs like nitrogen fertilizer, pesticides and hybrid seeds.

We must also thank unfairly maligned biotechnology, which lets us grow many crops that are disease, drought and insect resistant; rice that can survive prolonged periods under water; plants that are resistant to herbicides and thus facilitate no-till farming that improves soils and reduces erosion; and specialty crops like “golden rice” that incorporate formerly missing nutrients into vital foods.

Our crop yields are also rising because of another surprising factor: more atmospheric carbon dioxide. This trace gas (400 ppm or 0.04% of Earth’s atmosphere) acts like fertilizer for plants, and thus for the animals and people who depend on them. Studies show that doubling CO2 in the air will boost the growth of herbaceous plants by about 30% to 35%; trees will benefit even more.

Indeed, satellites show that Earth’s total vegetation increased 6% just from 1982 to 1999, as CO2 levels increased. Famines in a CO2-warmed tomorrow are therefore less likely, not more.

If humans have food, they can do all the other things necessary for civilization. However, we must double food production per acre – again and rapidly – to feed the world’s oncoming peak population, and enable all people to enjoy the nutrition that Americans and Europeans already do.

Equally important, since 1960, higher yields have also saved wildlife habitat equal to a land area greater than South America from being plowed for more low-yield crops. The price of farming failure in coming decades will not be famine. Instead, it will be the loss of hundreds of millions of acres of wildlife habitats.

Dennis T. Avery is an agricultural and environmental economist and a senior fellow for the Heartland Institute in Chicago and the Center for Global Food Issues in Virginia. He was formerly a senior analyst for the U.S. Department of State and is co-author, with S. Fred Singer, of Unstoppable Global Warming Every 1500 Years. Readers may email him at CGFI@mgwnet.com and visit his website at www.CGFI.org

Carbon Dioxide Won’t Cause Famines added on Saturday, May 31, 2014