“WE MARCHED THROUGH THE FRONT OF THE WHITE HOUSE”

(May 17, 2014) — Reporting live from Operation American Spring (OAS) in Washington, DC, Mike Volin reported at 2:05 p.m. that something noteworthy occurred when approximately 3,000 protesters entered the White House grounds on Saturday to protest corruption in the federal government and demand the resignation of Obama, Biden, and key members of Congress.

“Everybody was so peaceful; they were following directions, and then we turned our backs against the White House, and everybody turned their flags upside-down,” Volin said.

Live streaming of the event was provided on Saturday by Guerilla Media.

In an interview earlier on Saturday, Volin reported that the police were stopping traffic so that the group of about 3,000 could cross streets.

Other websites said to be providing live-streaming are here, although it is reported that “Live Streaming video websites for OAS are being attacked by hackers.”

At 3:22 p.m. EDT, Charles Strange, father of Michael Strange, one of 30 military special operators killed on August 6, 2011 in “Extortion 17,” went on camera.  Strange held a sign in memory of his son and said he recently met with a Gary Reid to pose questions about the tragedy, to which Reid reportedly offered no answers.

Strange said he gave Reid a 1,300-page report on the downing of the helicopter in Afghanistan in which 22 Navy SEALS and eight other special operators were killed but that Reid admitted to not reading it.

Swensson recommended that people refer to Black’s Law Dictionary to learn how a constitutional republic is supposed to operate.

At 3:36 p.m., Strange was invited to take the microphone and told the story of his son’s days as a Navy SEAL.  He reported that “the NSA started tapping my phone” after he “began asking questions.”  Strange said that Extortion 17 is “bigger than Benghazi.”

Regarding Reid, Strange said, “They don’t think any of us can think.”

At 3:41 p.m., Strange said that he “shook Obama like a bobble-head” after Obama reportedly said, “Michael changed the way America lives.”  Obama reportedly offered a full investigation which Strange does not believe took place.  Strange said he was asked to leave after becoming emotional during a meeting with a Defense Department official after his son’s body was returned.  Regarding his son, Strange said, “He loved this country. He’d do it again if he could.  He didn’t know he was getting set up.”

At 3:45 p.m., a man began playing a guitar and singing a prayerful song.

When the man finished, another stood up to make an announcement, but the live feed went dark. 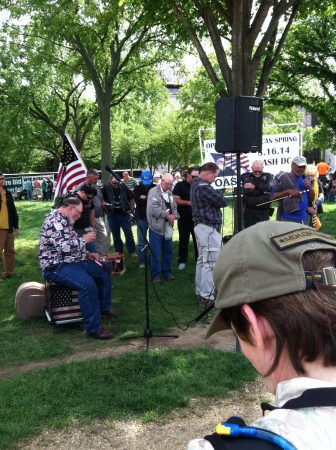