CAN VOTER FRAUD BE “IGNORED?” 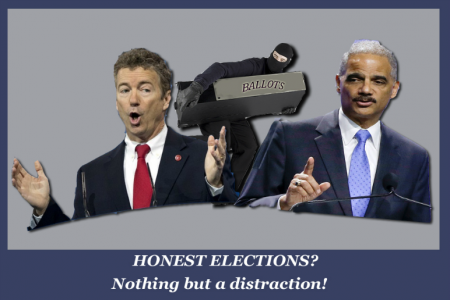 (May 12, 2014) — Just this past week yet another conservative hopeful has failed his country, our Constitution and the people who have placed their confidence in him.  Rand Paul has joined the Progressive camps of the ruling parties with his declaration that voter fraud should be ignored.

The foundation of liberty and freedom is built upon representatives of the people and all those in position of power being held accountable by fair and honest elections. The integrity in the election process and the belief by the people that the results are unblemished is the basis for the rule of law and the compliance to it.

Election results and the laws and regulations that are a consequence thereof, can be acquiesced to even if they run contrary to one’s culture or ideology if those results were understood to be obtained honestly. The sense would be that detrimental and dangerous programs could be overturned once the people see the effects of them and change course in the next election cycle.

But when the people lose faith in the system, when they begin to understand the corruption, the cheating and the flagrant voter fraud has been so ingrained that no amount public education will affect in anyway the pre-determined outcome of elections, the rule of law will break down.

It is important to note here that even as we understand that honest elections are the tools of a representative democracy and the shield against government domination, fraudulent elections are even more powerful tools of tyrants.

It is simply disgraceful for any conservative leader to remove himself from the continuous battle against those who would subvert the veracity of free elections.  If Rand Paul supposes that looking the other way or just out right ignoring voter fraud is the way to the White House, it may be time Americans reconsider why supporting him would differ from supporting any liberal Democrat.

Before we go into some of the crimes and unconstitutional processes which are growing like a cancer on our liberty, right here in America, let’s look at some very good uses of rigged elections which are going on right now in Europe.  This is a prime example of how corrupt governments use “elections” as a tool for power and aggression.

The Premier of the Ukrainian Provence of Crimea, was elected to his office despite Russian-Ukrainian voters being outnumbered by Ukrainian Nationalists by more than a 4 to 1 ratio.  But what the Russian government supported Premier had in his favor was rigged elections controlled by the Russians. As a result, when Russian policies were being imposed on the Crimea, the people who understood the election of their Premier was crooked, refused to except his decisions and ousted him.

Since then the Russians, in preparation for the ultimate invasion and takeover of the Ukraine, held yet another fraudulent referendum whereby a small minority of Russian-Ukrainians voted overwhelmingly to forsake Crimea’s sovereignty and turn the country over to Russia. That would be similar to Texans voting to allow Mexico to annex it.

This past weekend, after announcing even more referendums for even more Ukrainian territory to be handed over to Mother Russia, Ukrainian security forces raided a Russian separatist compound and confiscated hundreds of thousands of pre-marked ballots. Pre-marked, by the way, to join Russia.

We have pointed this out because this chaos, this corruption and this type of circumvention of honest elections is well under way here in America. The schemes and plots may be different, but the results will be the same.  If those in power are allowed to remain there by voter fraud and usurpation, voters will stop voting at the ballot and start voting from positions of armor-plated camouflage.

Back now to America.  Those who have decided that honest and reliable elections are nothing more than an inconvenience, may, someday soon, be even more inconvenienced when they find themselves whiling away endless hours in darkened cell or being contributing material in a landfill.

The Founding Fathers, having lived under tyranny, understood the need for governments to be accountable to the people. They also knew the only way for that to happen is to provide for fair elections. For this reason they limited those who would make our laws to very short two year terms.  That way each representative, in the words of Thomas Jefferson, would be accountable to the people, in short order.

INSURING PARTY DOMINANCE
Allowing the manipulation of congressional districts that guarantee the election of one party member or another was the beginning of “organized voter fraud”.  This clearly is unconstitutional and prevents accountability of the people in favor of accountability to the party.  Organizing voting districts in order to balance out, as equally as possible, registered voters from various parties, is the only way gerrymandering could be considered constitutional.

VOTING EARLY AND OFTEN
Early voting is an open invitation to voter fraud which is clearly unconstitutional and a violation of Article 2, Section 1 of the United States Constitution.  All across this country, for months prior to a Presidential Election, the state election officials open the door to voter fraud by allowing early voting. These early votes are in the hands of people who have proven over and over again they will do anything to win or steal an election.  The founders understood the nature of the power hungry politician and put into the Constitution a means that would limit the ability of criminals to hide or manipulate the votes being cast.

Here are the words they wrote:

“The Congress may determine the Time of chusing the Electors, and the Day on which they shall give their Votes; which Day shall be the same throughout the United States.”

For those who may not have been home schooled or have already suffered that delusion of Common Core Education, the electors are those voted for in the election and they all must be chosen on the same day.  This does not mean “early voting” or any other such thing.

COMPUTERS DELETING OR CHANGING YOUR VOTE
Of course the authors of our founding documents could never have imagined electronic voting machines and the perilous manipulation of the software associated with it.  But for them to accept that votes could be cast into a black hole of a computer program, where no verification of any kind would be available, is beyond the realm of possibility.  A return to paper ballots is the only way to protect every citizen’s vote.

And, how about these points of interest?

Obama’s Justice Department, headed by the gun running racist, Eric Holder, has not, nor does he ever intend to prosecute voter fraud and now it appears that Senator Rand Paul is in his corner.  God help this country.  We are in for some very rough times.

Note: If your email to us gets bounced back to you contact us  HERE and we will make sure your email server is accepted by TPATH.

Elections: Tools of Tyranny or Protection of Liberty added on Monday, May 12, 2014