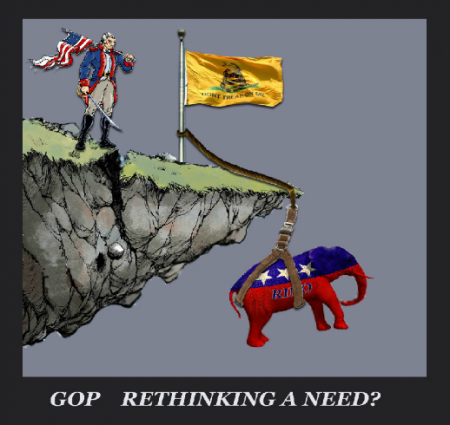 (Apr. 30, 2014) — Several months ago TPATH reported on the GOP’s “Declaration of War” against conservative groups and their candidates. Since that article, conservative politicians and candidates as well as Tea Party leaders across this country have been subjected to a relentless onslaught by the GOP establishment and their new found allies in the main stream media.

Conservatives have been attacked by all the usual suspects from Progressive Peter King to the main stalwart of the Blue Blood Establishment, the one and only Karl Rove.  The list of warriors for this campaign is not limited to those two.  The likes of Boehner and McConnell have forsaken their phony camaraderie and have come out of the liberal closet, so to speak.

Speaking of John Boehner, fresh off his latest condemnation of conservatives, and having learned nothing of the perils Christie suffered as a result of bedding down with liberal rats, he has just declared Obama to be someone he can work with. An honorable and honest man, he said. WHAT?  Which one of Obama’s destructive domestic or foreign policy fiascoes can possibly be deemed honorable?  Which one of the hundreds of outrageous lies he has told could possibly identify him as honest?  Mr. Boehner, how many times must you be lied to before you become skeptical of a man’s honesty?

An even better question could be asked of Mr. Boehner and perhaps Justice Roberts too.  What the heck is in your NSA profile. But that is of course, another story.

During these past few years Tea Party and conservative groups across the country have taken up the struggle to get small government and constitutional candidates on the November election ballots. They have done this work out in the open.  They have been honest and upfront with the GOP leadership.  As with all disagreements between like minded people who have the same agenda but different views on how to obtain it, the Tea Party supposed that each season’s primary election battles would be fought and the winners would then be supported by each faction in the general elections.  After all, the defeat of liberal Democrats and their progressive policies were the matters of utmost import.

That concept, my friends, has proven to be the Tea Party’s biggest mistake. Understanding that the GOP does not want, and structured as it is today, will never want conservative policies, may be the most difficult reality for many to accept.  Watching what the GOP does, as compared to how they campaign will quickly denude their carefully constructed facade.

So as Tea Party members dutifully showed up at the November elections, and on occasion had to hold their noses and vote for the RINO which had beaten their candidate in the spring primary, we now know the GOP did not reciprocate that gesture.  In fact they worked to defeat the conservative if he/she defeated their selected candidate.

That sickening display Karl Rove put on during the last Senate race when the establishment’s candidates lost to grass roots candidates was the bell ringer.   The very instant his candidates lost, the destruction of the conservative’s character began.  Conversely, The Democrats, who have more flakes in the House and Senate than a warehouse full of Wheaties and whichever brand of flake wins their primary, no matter how kooky, they are always fully supported.

“Your one sided, underhanded skulduggery is finished. The Tea Party has factually armed up and they are now ready to admit that your war is not being fought for the betterment of this country, but it is being waged purely  for the GOP. Your enemy is not socialism, communism or the Democratic Party.  Your enemies are those who would enforce the country’s rule book. The United States Constitution.  At the detriment of your country, you have chosen your enemy.”

The Bayshore Tea Party Group, in conjunction with TeamNJ and several other organizations  across this country have instituted a new game plan. NO MORE RINOs. The founders of the Bayshore Tea Party began this effort several months ago.  TPATH has been contacted by many groups, from Florida to California asking what this No More RINO’s thing is about and if we here at TPATH were on board.

After analyzing, researching and then formulating a clear picture of the danger this country faces, TPATH has decided to join this effort. We are on board.

No one can deny the destructiveness that the Democrats, in the name of and support of the that socialist usurper Obama, have done to this country in just five years.  No one can deny we face more of the same for the next three years, unless our Knight-In-Shining-Armor, Mike Zullo indeed leads the long awaited cavalry charge that will save our Republic.  On that we can only pray and wait.

As much damage as has been done, the strength, the work ethic and the desire to be free that this country has shown, in the face of relentless division, regulations, spying and corruption, it has endured.  And it will endure the next three as well. The only question is how long a recovery period will be needed. We will survive the cancer the left has metastasized into our culture.  It won’t be easy and the establishment GOP has shown they do not intend to aid in that recovery.

2014 and 2016 are two very important elections on our horizon.  The liberty of America shares its future with the viability of the Republican Party. The Tea Party and other conservative groups will work for that liberty and the GOP can come along or be left irrelevant.

America might well struggle to survive another 4 years of a Democrat President.  But patriotic groups and their members are done assuming the GOP establishment leaders are any different or any better. If they force yet another progressive or ineligible presidential candidate down our collective throats, we will not join them in the destruction of our country.

If every state and local Republican Club or Party sees this and understands that this is not just a threat, there may still be time to stop the GOP from committing suicide.  The people are done holding them from self imposed irrelevance as they dangle from the cliff.  This time, they will be on their own.

Our pledge, here at TPATH is to TeamNJ, the Bayshore Tea Party Group as well as the many other patriot groups across this country and to our beloved America, never again will a RINO vote be cast.

If you represent a group and this aligns with your beliefs
and you wish to help get this message out
please contact
the Bayshore Tea Party Group
HERE
PERMISSION IS GRANTED TO POST AND EMAIL THIS ARTICLE
PROVIDED THE CONTENT IS NOT ALTERED OR EDITED.

One Response to "No More RINOs‏"