by a Bundy Ranch Supporter 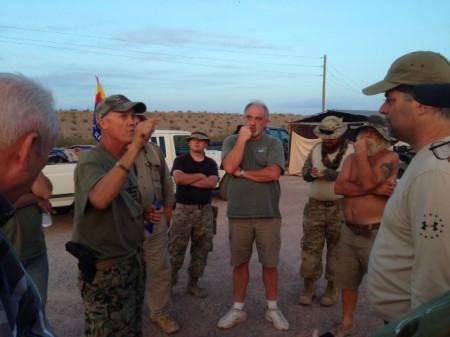 (Apr. 23, 2014) — I got a call to action via email from a source last Saturday morning (April 19th) to meet at the Bundy Ranch.  The call was for 5,000 people to gather at the Bundy Ranch to support their effort.  I happened to be near Las Vegas last weekend so I took a drive out to the Bundy Ranch.  I went as far as the entrance to the main road to the entrance.  This was the area that was being heavily patrolled by militia, minutemen and Oathkeepers.  I stopped at the Arizona Minutemen Camp and visited with them for several hours.

The atmosphere at the camp was intense.  Almost all on hand were Veterans with significant combat experience.  All were armed and ready to face conflict.  There was a tent set up with provisions where a military style strategic meeting took place. There was rumor that there might be a raid on the Bundy house and arrest the family for trespassing.  All of the various patriot groups were on full alert. Coming in at dawn of Easter Sunday seemed to be the most likely scenario.

Intel indicated that the government forces had gathered at the Marriott in Las Vegas. Since I was headed went to go home, I decided to help the effort and confirm or deny that intel.  When I arrived at the Marriott I found over 20 government vehicles in the parking structure and outside lot. Inside in the lounge area of the bar, there were two groups of men conducting a meeting.  Although I wasn’t able to confirm their identity as they were all dressed in casual clothes, it was rather odd to see this many young, all physically fit, clean cut men with several laptops open meeting on a Saturday night at 11:30PM.  How many participants of corporate junkets to Las Vegas are hanging out that late on a Saturday night holding a company meeting?  It sure looked fishy to me. It all seemed to fit. 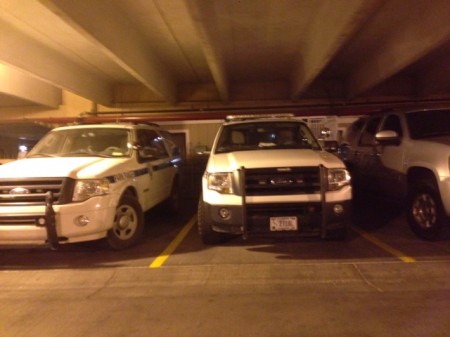 As it turned out, there was not a raid Sunday morning and the situation is on hold.  For a short while there I thought I was right in the middle of a future history book.

Attached are a few pictures for you.  Our taxpayer dollars hard at work funding Federal Bureaucracies that now weaponize and militarize an unconstitutional Federal Police force that is used to overwhelm, outnumber and terrorize citizens who simply dispute a fee.  All while meeting in swanky hotels.

One Response to "Eyewitness Account from Bundy Ranch Responder"