Millions of Americans Are Just Itching To Lock And Load 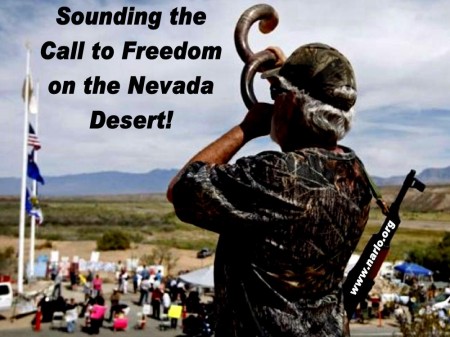 (Apr. 16, 2014) — “When a ‘forest fire’ is lit, there is no telling which way it will go.  It depends on the ‘wind’, the ‘fuel load’ and the ‘humidity’.  The ‘wind’ is about to blow real hard, the “fuel load” is huge and the humidity is dropping rapidly.  It just takes the right ‘match’, a lightning strike, or spontaneous combustion.  The question is, what (or who) will set it off?  Could it be Obama Care, illegal aliens getting amnesty, Cap and Trade, the one-world-order, radical environmentalism, the brainwashing of our kids, trashing the Constitution by politicians, or a confrontation with a maverick rancher in Nevada?   Was Jefferson right?  Does a society need a revolution every hundred years?  Messy, but could it be necessary if freedom is to be defended and maintained?” — Ron Ewart

For now, the dust is settling, the crowds are dispersing and the hot passion of open revolt is slowly waning, as the warm winds of the coming summer begin to blow across the Nevada desert and the cows come home to their range, released to their owner by a government that turned tail and ran when the wild American spirit of the West raised its head in righteous anger.  Whether Nevada rancher Cliven Bundy was right or wrong under the law, they came by thousands, loaded for bear, to confront what they considered to be a government gone mad with power.

Here is one such account, allegedly by a Los Angeles attorney who tried to get there:

“I rolled into Laughlin really early, like 5:30 am.  So many people had shown up, that we decided to leave in groups.  A second group to leave at 8 AM as scheduled.  Ours was a big group too.   About two dozen cars, loaded with passengers.”

“The highway was almost empty until near Mesquite.  Then it was a traffic jam. Motor homes, campers, ATVs running along side the freeway, motorcycles, vehicles, everything you could possibly imagine.  Everyone on their way to Bunkersville.  Then it about stopped, just inching along.  Word traveled down the traffic line that the feds had blocked the road just out of Mesquite and were searching vehicles for weapons and cell phones.  Cell phones were confiscated and smashed.  The people were given a chit for $30.00 redemption value.  I left my phone at home.  Some of us that had four wheel drives decided to just leave the road and head overland.  As we got closer to the ridge, we were stopped by armed militia.  We could not go any further.  We could wait, or turn around and go back to the road. Men, that I suspect were special forces, had climbed the ridge from the back side and captured the snipers.  They were at that moment coming down the ridge to take them to Mesquite where they would be let go.  They weren’t prisoners, they were just going to be replaced by friendlies.”

“Because of the roadblock on I-15, people refused to be searched, and refused to turn back.  They just pulled off the road and parked. It was like a dam backing up a river.  Soon the feds were trapped between the Americans who had already gotten through, and the Americans that had been stopped on the highway.  The BLM agents went into full panic mode and called for help.  LVPD which had REFUSED to show up to help Americans HAD to show up to rescue BLM that was now trapped and helpless.  The blockade was SEVEN MILES LONG!  That’s a pot load of people.”

“A group of armed Americans along with local cowboys went to Mesquite to liberate the cows that had been confiscated and held by BLM.  They were being driven back home in an old fashioned cattle drive.  The feds say it was voluntary, don’t believe it.”

“I was basically standing around twiddling my thumbs when the word came down that the Director of BLM had surrendered and all forces would be withdrawn. I could not go on.  The road was blocked and would be blocked probably for the rest of the day at least.  A bunch of us turned around and left.  It was over.  There were THOUSANDS of people there, and more arriving every minute.  The ranch, Gold Butte, the entire area was completely surrounded by Americans.  The highway was completely blocked in both directions of people trying to get through.  Everyone was very peaceful and friendly.  No fights or anything.  There was a rumor in the line, that some of the mercenaries hired by the feds had defected and were now on the side of the Americans.”

“I came back and immediately saw this pack of lies and half truths in the news media.”

“At one point, I-15 was closed in both directions, about seven miles south of Mesquite, because protesters had blocked the freeway. Nearly two-dozen police officers and a SWAT unit were at the scene to keep the peace and assist the BLM enforcement officers to safely leave the area.  We could tell that they were visibly scared!”

We have no reason to doubt this account but we cannot independently verify it.   Nevertheless, you won’t see this part of the story on the news.

The question remains, why would thousands of Americans come to the aid of a grizzled, range-weary old rancher who had come to grief with a federal bureaucracy known as the Bureau of Land Management?  Why would they purposely put themselves in harm’s way with a federal government that had no compunction of shooting down the wife of Randy Weaver at Ruby Ridge, Idaho and besiege a compound full of men, women and children with an army tank at Waco, Texas and set them ablaze.  When these Americans came to the desert on behalf of rancher Cliven Bundy, did they know that other Americans would outnumber the heavily-armed government agents by 4 to 1, thus making a shooting war much less likely?  Did they know that the event would be covered by Fox News and ratcheted up to an international story?  Did they naively think that these government agents wouldn’t shoot back if provoked by the crowd?  Did they realize that they could have died right there on the desert, leaving loved ones and siblings grieving all over the Western United States?  What brought these people to the Nevada desert to fight a fight that wasn’t theirs, a fight that could have ended in a bloodbath?  Or maybe they thought that the fight was theirs.

Cliven Bundy started a forest fire with one match.  He ignited the flame of freedom in the hearts and minds of millions of Americans, some of whom decided to put their money and their lives where their mouths were.  They voted with their feet in positive action and some of them were willing to vote with their guns if it became necessary.  They rose up and the government backed down.  It is not an unfamiliar scene.  It happened with the Klamath Bucket Brigade and the Jarbidge Shovel Brigade, both in the wild and woolly West of America.  This time the Nevada Mounted Rifle Brigade sent the FEDS packing.  We have even witnessed government backing down locally as well, when the people rose up in large numbers.   The people have power if they will only choose to exercise it with courage.

Yes, there are millions of Americans itching to lock and load.  We hear from them almost daily.  But why?  Because government and especially the federal government, has pushed, abused, harassed, cajoled and intimidated too many people for far too long and the hair on the backs of the necks of some Americans itching for a fight, is rising.  The outcome in Clark County, Nevada was fully predictable to anyone with any knowledge of the true American spirit ….. let freedom ring, or we will punctuate our strongly held beliefs of liberty with guns.   Why did the government back down?  Because they were surrounded by a superior force where a fight could have ignited a much wider, but politically devastating war with the potential of the dead bodies of American men and women pasted all over the news.

And it’s not just the BLM, it is the entire federal bureaucracy.  It is the Department of the Treasury and the EPA and the NSA and the IRS and the FDA and the FCC and the FTC and the FBI and the INS and the USDA and the DOE and Social Security and the HHS and the DHS and the Department of Education, all literally drunk on the addiction of federal power.  It is the Executive branch and the Legislative branch and the Judicial branch that have lost all allegiance to the Supreme Law of the Land, that blueprint for freedom, the U.S. Constitution.  Is it any wonder that Americans came to the Nevada desert to challenge an out-of-control government head-on and call their bluff?

Is the standoff at the Bundy ranch over?  Not likely.  This is just the beginning in a battle of power between East vs. West, North vs. South, rich vs. poor, rural vs. city, black vs. white and liberal vs. conservative, in a fight that will pit Americans against Americans in what appears to be a hopelessly divided nation.

Good God, ladies and gentlemen, we pray that cooler heads will prevail.   We truly and sincerely don’t want it come to violence and hopefully, this race to the precipice by some brave Americans in Nevada will force government to halt the direction they are heading before America, once again, sets on the unknown and unpredictable path to civil war, or revolution.  It is coming whether we like it or not because “… the ‘wind’ is about to blow real hard, the “fuel load” is huge and the humidity is dropping rapidly.  It just takes the right ‘match’, a lightning strike, or spontaneous combustion” to start a fire that will be nigh near impossible to put out ….. when freedom cries out for retribution.  Did Nevada rancher Cliven Bundy strike that match, or did the socialist president Barack Hussein Obama beat him to it?  We will see!
——————————

Ron Ewart, a nationally known author and speaker on freedom and property issues and author of his weekly column, “In Defense of Rural America“, is the President of the National Association of Rural Landowners, (NARLO)  (http://www.narlo.org) a non-profit corporation headquartered in Washington State, an advocate and consultant for urban and rural landowners.  He can be reached for comment at info@narlo.org.

Millions of Americans Are Just Itching To Lock And Load added on Wednesday, April 16, 2014