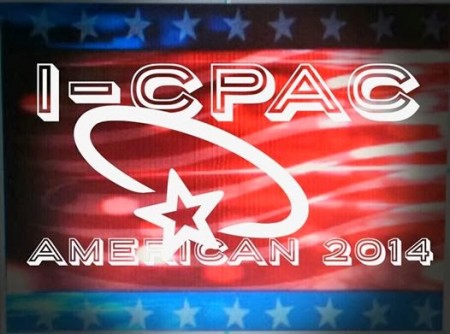 (Mar. 7, 2014) — Like a “candid camera moment” or a ‘Precious Moment,” Cody Robert Judy candidate for President created I-CPAC AMERICAN 2014 so that you could tell the GOP just how unhappy you are with their “conservative” stand on ‘principles’ of the Constitution.

Cody as a Presidential Candidate in 2008 took Obama, and America’s most unpopular U.S. Senator according to a recent poll by Fox, Sen. John McCain, to task in 2008 for not being a ‘natural born citizen,’ having been born as a native son of Panama and being naturalized 11 months after his birth by a Congressional Act, and then receiving his ‘natural born citizenship’ from his good ole boys’ club in non-binding U.S. Sen. Resolution 511 in 2008 sponsored by none other then Sen. Hillary Clinton and Sen. Barack Obama, which he also took to the United States Supreme Court in Judy v. Obama 12-5276 in 2012 and 2013 without so much as a hearing.

It’s understandable, then, that Cody has actually stood fast upon the principles of the Constitution wherein only a ‘natural born citizen,’ born in the U.S. to Citizen parents, was qualified for the Office of the President. Mr. Judy has stood up time and time again asking Republicans to hear his case in Congress presented with the evidence of professional law enforcement witnesses in Sheriff Joe Arpaio’s Cold Case Posse, which many of the courts deferred the issue to on the basis of the political question doctrine.

This year Sen. Ted Cruz spoofed Obama on his “not even a smidgen” comment about the IRS really not targeting Tea Party Groups, and conservatives in general, to that of Nixon’s “I’m not a crook,” then launched into actually calling for a ban of the IRS in his keynote address at CPAC.

In the following “moment” at the Independent Conservative Political Action Conference, Cody Robert Judy fired right back at Sen. Cruz for not using his bully pulpit to actually stand up and defend the real principles of the Constitution that outline the qualifications of the Office of the President, easily discerned as the most powerful position in the Constitution being referred in 13 pages of the 48 page Constitution’s pamphlet dwarfing any other right or institution in comparison.

While “National Security” served Obama as a favorite excuse for virtually all of the scandals coming out of Washington DC, including the spying being done on all Americans Sen. Cruz remarked about telling everyone ‘to keep their cell phones on’ so Obama could hear him during his CPAC address, Obama’s lack of qualification is the one scandal that turns the “national security” issue against Obama, but Republicans have refused to hear the case or take it seriously.

Sen. Ted Cruz himself has denounced his Canadian citizenship in the understanding that dual citizens cannot run for President, but he has yet to have the character to support the Constitution in calling Obama on the carpet for his utter usurpation of the Office of the Present, or seemingly recognizing he himself is not qualified for that particular office. While we admire many of his tactics of standing tall as a Senator in filibustering against the debt ceiling raise, and Obamacare, he has failed indeed to recognize the ‘root’ of those problems in Obama’s qualification and identity scandal.

America does not need a President who does not have the character to take a stand for the Constitution as it is in his oath more so than any other office to protect preserve and defend the Constitution. Cody has demonstrated that and is looking for your help and support because if you choose to continue to support candidates who continue to sweep this dirt under the carpet you are likely to see the blessing of this great Nation continue to diminish with debt and a loss of standing in the respect of the world along with the freedom’s and liberties that have made America the beacon of the light for all to witness as such a unique and creative experience and opportunity.

Cody is running for President but really needs your help for he can’t do it alone, but he has in a non-partisan way stood up for the principle that so many have called ‘unimportant’ not recognizing the disaster in the White House that has played out the last five years in scandal after scandal without any responsibility. Isn’t it time you at the very least expect your leaders to stand up to the fraud, forgery, and deceit that Obama’s identity crisis represents?

So, sit back and for 2 minutes enjoy this I-CPAC American 2014 Moment. We encourage everyone to make their own video’s and they are welcome to use the Independent Conservative Political Action Conference logo at the top if they would like to in saying just what’s on your mind to the GOP.
http://www.youtube.com/watch?v=VU5S7_asIyo

If your ideas of a smidgen of character includes covering up the long form fabrication associated with the piece of paper Obama handed out to the press in the White House press core room, your understanding needs an adjustment of the word “smidgen” of character.

I hope Senator Cruz that you have the character someday to take a stand for the identity crisis America faces with Obama. You know he has a long form fabrication for a birth certificate, you know he has a mismatched social security number , and you know his draft registration has a fraudulent stamp on it.

So what aspect of character calls for the repeal of Obamacare? The character that says Obama is not qualified to sign any law into existence and accordingly Obamacare is not a legitimate constitutional mandated law that has been signed by a qualified President.

How You Can Help

Obama’s long form birth certificate has been exhumed to be nothing more then a long form fabrication by professional law enforcement standards and that was brought to the attention of the United States Supreme Court in Judy v. Obama 12-5276, for which I served as the Presidential Candidate running in the Democratic Party and after the primary, as an Independent Presidential Candidate securing the ‘standing’ necessary for the complaint in 2012 and 2013.

Orrin Hatch R – U.S Senator from Utah and Mitch McConnell R- U.S. Senator from Kentucky just requested two sheriffs kits produced by Michael Volin of WheresObamasBirthCertificate.com (WOBC) with the purpose of informing the public and elected officials of the forgery of the long-form birth certificate image posted since April 27, 2011 on the White House website. These kits (Get Yours Free Here) contain the same evidence released in March 1, 2012 (and a little more) that I included in my case against Obama that went from Georgia State- Georgia State Supreme- to U.S. Supreme 12-5276 in Judy v. Obama.

Please urge and encourage your Representatives to OPEN AND TRANSPARENT HEARINGS in the House of Representatives on Obama’s eligibility as the solution to eliminating Obamacare. These hearings must be held and the evidence must be heard that are in the Sheriff’s kits most all of the Representatives have received now.

If these hearings are conducted in the open and reported in the open, the evidence will mount collectively and the U.S. Senate although it has a majority of Democrats will have to concede to the facts and evidences or will be seen as completely unfit for their duties and as incompetent. Utah would most likely see more benefits come from supporting the Candidates like myself, (well, Candidate as myself because there were no other candidates in the entire U.S.A. who stood up for principle regardless of party), fighting for equal protections under the law in pushing for Open and Transparent Hearings in Congress with two million dollars on Obama’s Verification Eligibility qualification hearings on the stage to remove him as a disability according to Amend 14, Sec.3 would be a lot faster solution.

You Can Help Me [If you would like to help Cody Robert Judy in his bid for upholding the Constitution in “America’s Birther Campaign,” or ABC Campaign, which highlights the United States Constitution with information and education for voters to understand the tough questions politicians should be answering in 2014, and in the coming 2016 election for the Office of the President please make a contributions here:

We pray for the Lord to save our Country and restore America from the dilapidation we now find ourselves, and the principles of the Constitution in. For this I am Taking A Stand.