“LIFE NEEDS TO BE PROTECTED” 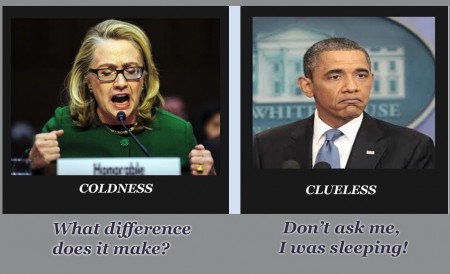 Yet this woman would have you believe that she is someone who is capable of leading the most powerful nation in the world.  I wonder how she would have reacted on a different Sept. 11th – the one that changed our lives forever in 2001.  Would she have retreated behind closed doors and sent out one of her lackeys, such as Susan Rice, to speak to the nation in its time of distress?

But let’s ask the same question of the man who is actually there to answer the phone in the middle of the night.  What difference did it make to him that our embassy was under attack and that the lives of Americans were under siege?  Apparently it didn’t make much difference to him either.  He didn’t miss a step in boarding Air Force One and heading out to Vegas to campaign.  And he didn’t miss a step in walking away from the crying mother of our Ambassador who was killed in Benghazi after handing her some flowers.  And it didn’t make any difference to him that one of the cousins of Ambassador Stevens was locked away in a private room by Secret Service after calling BO a liar.

Unfortunately, this is the kind of leadership you can expect from people that do not value life. After all, why should we, the America people, expect leaders who won’t protect innocent infants in their mother’s womb to protect the rest of us? The truth is that situations that are life-threatening don’t make a difference to them – whether it be for the born or the unborn.

It also made a difference to some of us.  Those who believe that the lives of all Americans deserve respect and deserve the protection of the government they live under.  And it makes a difference to the families of those that have pledged their lives to serve. We all have a right to expect and to demand more from our government.

Hopefully the events of Benghazi will continue to make a difference to all of us when Mrs. Clinton seeks the nomination of her Party for the presidency in 2016. There are many bumper stickers and signs of all kinds that have the symbols of 9/11 with the slogan “we will never forget.”  If we are to remain a noble nation, we need to never forget the events of 9/11/2013 as well.  Life is fragile and needs to be protected. The same can be said for our way of life and the liberties we have become accustomed to enjoying.  Life and liberty can only be properly preserved by those who respect and appreciate them. If Benghazi didn’t make a difference; if they could ignore the many phone calls asking for help; if they could go on with their lives without missing a step while Americans were under siege; they should not be given the responsibility or the respect of representing a nation that does respect these fundamental issues.

We may be stuck with BO and Hillary – at least to some extent – but November elections are only a few months away.  Americans need to ask anyone asking for their vote where they stand on life issues.  It makes a difference.

Many thanks to Dr. Charles R. Roots, Former Staff Sergeant, USMC Captain, U.S. Navy Chaplain Corps (Ret.) and cousin of Ambassador Chris Stevens for many of the personal facts that he and his family had to endure.

What Difference Does It Make? added on Thursday, February 6, 2014