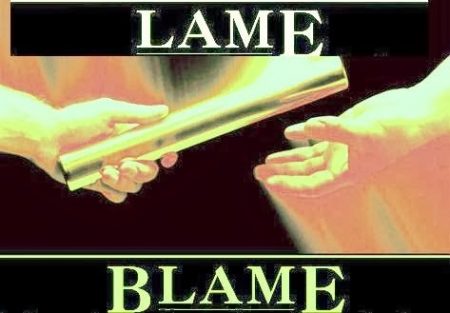 (Feb. 6, 2014) — Here’s the deal for the House of Representatives – If you’re being blamed for it, why not hold an investigative hearing called “Presidential Verification of Qualification on Obama”?

“And it’s a base that still clings to the dark fantasy that Obama’s an African-born impostor who’s ineligible to be president or to command the U.S. military. And yes, Republican members of Congress still push that nonsense; House Republicans who fueled the futile shutdown.”

In a piece that referred to those taking a stand for the Constitution such as Senator Ted Cruz, former Vice Presidential Candidate and Alaska Gov. Sarah Palin, and Freedom Watch founder Attorney Larry Klayman in the pot of evangelical “rabid, half-baked conspiracy theorist” along with birther exhibitionists Joseph Farah and Jerome Corsi, the blame is lame.

I don’t recall where or when the “Birther Claim on the Constitution’s demand for a natural born citizen in the office of the President’ has ever been ‘debunked’?

One is left wondering if ‘Reason favors Truth’ in Mr. Boehlert’s assertions or if “Reason favors Fraud”? Is The “Obama’s-a-foreigner ugliness fermented” he attributes to the Birther movement rather a “Plea for truth and the law of our Constitution to be unfurled equally,” rather than tucked into a dark corner?

he standards of our law have worked tirelessly in birthing a standard for the world to see that held all under the laws equally and wasn’t subjugated to “cronyism,” a “Good ole boys network,” the dictator’s tyranny, or a king’s royalty.

If deceit, trickery, fraud, and forgery were used to put Obama in the White House, is it “rabid, half-baked, fermentation” to ask Congress to have a hearing on it? Is it wrong to assert that the Judicial Branch with its set of individual judges and even panels of judges, as the United States Supreme Court represented in Judy v. Obama 12-5276, are simply not equipped to take on the magnitude or weight of responsibility that a disability impeachment hearing on Obama actually consists of?

In Nixon’s impeachment, which occurred during Nixon’s second term and proceeded after the State of the Union address, the Democratic Party was the prevailing party for truth and reason for the Constitution, and it wasn’t until a hearing in the House of Representatives was threatened with a virtual certainty of impeachment by the Democratic Party majority that Nixon resigned.

Indeed, the House of Representatives, as long as it is controlled by the GOP, has the ‘purse-strings’ to the President and it takes money to enforce any executive order; it takes money to enforce any law. We are certain that the House of Representatives has indeed been the branch of government long funding Obama as an employer would a hired hand, and it’s simply time to call the employee in on the carpet for lying on his application for employment.

Now what is unreasonable about that? Certainly Mr. Donald Trump, who instigated a hurried and rushed forum of Obama’s released long-form fabrication in a White House press release, isn’t qualified to do anything about its being false and fabricated, nor is Mr. Trump qualified to pacify, or placate, Congress on a job well-done, when it comes to vetting and assuring the American People the qualification for the Office of the President is fulfilled in Obama. He’s not even an elected official.

If you want to discuss principles vital to “We The People” when it comes to the President of the United States of America, it is the United States Constitution that holds our Union together. It is not just a “g****** piece of paper”, as former President George W. Bush remarked when questioned about the constitutionality of the Patriot Act, or as the media, the Democratic Party or former Nancy Pelosi is calling to challenge.

If there is anything that could be considered ‘half-baked’ and handled in a precarious and foolish determination, it has been the qualifications of Barack Hussein Obama. The sword wielded by the Office of the President is a powerful one, and unfortunately the person in the White House is never an individual alone.

There are many forces in active engagement that put Obama in the White House, the least of which has the Constitution of the United States of America as a code of conduct. In “Closed Circuit,” a 2013 British-American crime thriller film directed by John Crowley and written by Steven Knight, starring Eric Bana, Rebecca Hall, Ciarán Hinds, Jim Broadbent, and Riz Ahmed, the Defendant was only safe as long as the truth was not revealed.

Upon the threat of the truth being revealed of the government’s involvement regarding the bombing and murder of 120 people, the case is closed by a government that prohibits any dissemination of truth by threat, coercion, and finally, by murder.

The real wonder of the United States of America is that reelection happens every two years for U.S. Representatives in the House, and I’m beginning to see a much more tangible power behind that wisdom then I ever have before. In a proper responsibility of a check and balance of powers, the two-year turnover serves the People in a very wise way, for it can indeed check the Executive Branch that has languished out of Constitutional credibility.

Men like Donald Trump this year will have a tremendous sword to wield on the House of Representatives, and if Obama’s “hand-outs,” “pay-offs,” “exemptions,” and “subsidies” have not paid off in “The Margin Call” after $6 trillion has been added to the national debt as what’s happening now with Unions breaking rank, we could see justice following a course for truth in a brilliant light very soon with the catalyst of Obamacare which the GOP is challenged with funding, altering, or abolishing based on an unqualified president’s signature.

I’m not one to simply criticize without suggestion, so I have made a proposal that I think would be much better:

viewed by 25 people so far. (smile) Rush Limbaugh again today talking about “The Giant Fraud” perpetrated upon the people that is just tragic and turning people into “wards of the state.”

How You Can Help

Obama’s long-form birth certificate has been exhumed to be nothing more then a long-form fabrication by professional law enforcement standards, and that was brought to the attention of the United States Supreme Court in Judy v. Obama 12-5276, for which I served as the Presidential Candidate running in the Democratic Party and after the primary, as an Independent Presidential Candidate securing the ‘standing’ necessary for the complaint in 2012 and 2013.

Orrin Hatch (R), U.S Senator from Utah, and Mitch McConnell (R), U.S. Senator from Kentucky, just requested two sheriff’s kits produced by Michael Volin of WheresObamasBirthCertificate.com (WOBC) with the purpose of informing the public and elected officials of the forgery of the long-form birth certificate image posted since April 27, 2011 on the White House website. These kits (Get Yours Free Here) contain the same evidence released on March 1, 2012 (and a little more) which I included in my case against Obama that went from Georgia State to Georgia State Supreme to U.S. Supreme 12-5276 in Judy v. Obama.

Please urge and encourage your Representatives to OPEN AND TRANSPARENT HEARINGS in the House of Representatives on Obama’s eligibility as the solution to eliminating Obamacare. These hearings must be held and the evidence must be heard which is in the sheriff’s kits which most all of the Representatives have received now.

If these hearings are conducted in the open and reported in the open, the evidence will mount collectively and the U.S. Senate, although it has a majority of Democrats, will have to concede to the facts and evidences or will be seen as completely unfit for its duties and as incompetent. Utah would most likely see more benefits come from supporting candidates like me (well, “candidate like me” because there were no other candidates in the entire U.S.A. who stood up for principle regardless of party).  Fighting for equal protections under the law in pushing for Open and Transparent Hearings in Congress with two million dollars on Obama’s Verification Eligibility qualification hearings on the stage to remove him as a disability according to Amendment 14, Sec. 3 would be a much faster solution.

You Can Help Me [If you would like to help Cody Robert Judy in his bid for upholding the Constitution in “America’s Birther Campaign”, or ABC Campaign ,which highlights the United States Constitution with information and education for voters to understand the tough questions politicians should be answering in 2014, and in the coming 2016 election for the Office of the President please make a contributions here:

Let me now wish everyone a very happy and warm New Year as we pray for the Lord to save our Country and restore America from the dilapidation we now find ourselves and the principles of the Constitution in, for this I am Taking A Stand.

Lame Blame -GOP is Blamed for Birtherism – Why Not Have a Hearing On It? added on Thursday, February 6, 2014