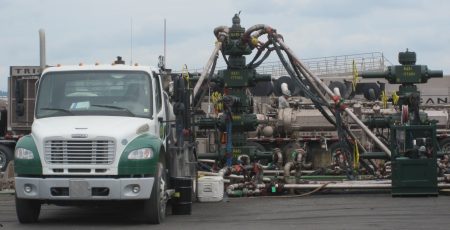 (Feb. 5, 2014) — Williamsport, PA. The only thing deeper than a natural-gas well is the ignorance of the anti-fracking crowd.

Fracking – formally called hydraulic fracturing – involves briefly pumping water, sand and chemicals into shale formations far beneath Earth’s surface and thousands of feet below the aquifers that irrigate crops and quench human thirst. This process cracks these rocks and liberates the gas within. Though employed for decades with seemingly no verified contamination of ground water, anti-fracking activists behave as if this technology were invented specifically to poison Americans.

“Fracking makes all water dirty,” declares a poster that Yoko Ono recently exhibited at a Manhattan carpet store. Rants another: “Pretty soon there will be no more water to drink.”

Reporting on an anti-fracking event starring actor Mark Ruffalo and mystic Deepak Chopra, writer Alisha Prakash warns: “If this process remains the status quo, our planet will not be able to sustain life in another 100 years.”

In contrast to all this absurd hyperventilation, consider the sworn testimony of former EPA administrator Lisa Jackson. Hardly a right-wing shill for Big Oil, Jackson told House Government Reform Committee in May 2011: “I’m not aware of any proven case where the fracking process itself has affected water.” In April 2012 Jackson said, “In no case have we made a definitive determination that the fracking process has caused chemicals to enter groundwater.”

Naturally occurring methane has tainted water since long before fracking was invented. However, environmental regulators from Pennsylvania to Arkansas to California echo Jackson. The allegation that fracking causes water pollution lacks just one thing: proof.

Beyond this, frackophobes would be astonished to see how much Anadarko, America’s third-largest natural-gas producer, obsesses over health, safety, and the environment in its Marcellus Shale operations. Anadarko and the American Petroleum Institute discussed these practices during a summer 2013 fact-finding tour that they hosted for journalists in Williamsport, Pennsylvania, the thriving heart of what I call Frackistan.

“We live in this area,” says Anadarko production manager Robert Montgomery. “We love the forests here. We want to keep the environment safe for us and our kids.” He adds: “Regulatory agencies have been working with us every step of the way, as we have been developing these new technologies. There’s a whole lot of science and engineering involved, and we work side by side, so they know what’s going on.”

Montgomery explains that, before drilling, Anadarko identifies flora and fauna near production sites. In Pennsylvania, it uses outdoor cameras to determine which animals traverse the area. This helps Anadarko work with landowners after drilling and fracking are completed, to restore their property to its prior condition, or enhance it with new and different vegetation if the owners want to attract certain species.

For example, a large pond on a small hill belonging to the Elbow Fish and Game Club temporarily holds production-related water for an adjacent development site. After 50 to 100 days of drilling and well construction, and two to five days of fracking, about six to twelve wells will quietly begin to collect natural gas from this field. At that point, the soil excavated for the pond will be removed from storage and returned from whence it came. Anadarko will plant local grasses and flowers and, except for a few unobtrusive wellheads, the place will look largely untouched, as the wells yield gas for 20 to 40 years.

A few minutes away by car, several wells are being fracked on acreage owned by a farmer named Landon. The bonuses, rents and royalties he receives for gas exploration and production on his property enable him to put a new roof on his house and barn, buy new equipment, and save money for retirement. But he wants his fields and wildlife habitats protected. To that end, a thick felt-and-rubber pad, surrounded by a large berm, prevents potential spills from contaminating Landon’s soil.

“We even collect rainwater that falls on the pad,” says a production worker fittingly named Anthony Waters. “It’s pumped down the well, not put onto land.”

It would be far cheaper to let rainwater wash over fracking gear and then drain into the soil or roll downhill into a creek. But that’s not Anadarko’s style.

As mentioned, fracking does not involve constant injection and extraction of water throughout a well’s two- to four-decade lifespan, but only for the five days or less it usually takes to frack a well. This is the rough equivalent of getting a vaccination for five seconds, rather than living with a constant intravenous drip. For all its supposed evils, in this analogy, fracking is like a flu shot.

The amount of water involved here is microscopic, compared to other, thirstier fuels. According to the U.S. Energy Department, it typically takes about three gallons of water to generate 1 million British thermal units of energy from deep-shale natural gas. For conventional oil: 14 gallons. Coal: 22.5. Tar sands: 47.5. Corn ethanol: 15,805. Soy biodiesel: 44,500 gallons. Cultivating corn and soybeans requires irrigation, fertilizer and pesticides, which highlights just how stupid it is to turn food into fuel.

Fracking the Marcellus Shale happens some 6,000 feet underground. That is about 5,000 feet (more than three Empire State Buildings) below groundwater supplies. Drills and pipes penetrate aquifers, but all the way through more than a mile of rock they are encased in multiple layers of steel and concrete designed to separate drinking water from fracking fluids (which are 99 percent water and sand and less than 1 percent chemicals). 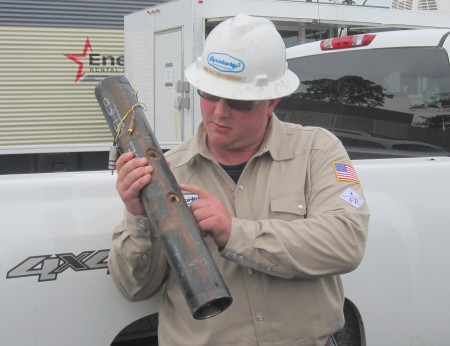 An old-fashioned well was like a vertical straw that sucked up gas just from the bottom tip. Horizontal wells start from one small spot at the surface and then fan out far underground. They then draw in gas from across a wide area of gas-bearing shale, as if through small holes in vacuum hoses laid flat on the floor. Having multiple wells drilled through a limited space on the surface means reduced impact on farmland and habitats, as well as fewer roads and trucks.

Is there risk in all of this? Of course. If not, Anadarko would not take these precautions. However, risk encircles us. Seat belts are not a reason to ban automobiles. Instead, they are evidence that managing risk lets people live their lives rather than hide at home – which is perfectly safe . . . until fires, floods, tornadoes and burglars come knocking.

Rather than peddle ill-informed nonsense and crazy lies about fracking, Yoko Ono and company should learn what Anadarko is doing and encourage other producers to adopt its standards as best practices. And if another company is cleaner and safer, challenge Anadarko and its competitors to learn that producer’s lessons. The frackophobes’ hatred of hydrocarbons should not prevent them from learning nor excuse them from speaking factually.

Unlike Pennsylvania, New York State is sitting on its adjacent portion of the Marcellus Shale and studying its collective navel, while farmers and their loved ones live on the edge of poverty and approach bankruptcy. The Empire State and the rest of the U.S. should harness fracking’s surprisingly clean technology and develop this country’s bountiful natural-gas reserves – carefully, responsibly and for everyone’s benefit.

What’s not to like? This fuel is all-American, and the revenues stay here – not in the hands of people who want to kill us.

——————————————
Deroy Murdock is a Manhattan-based Fox News contributor and a media fellow with the Hoover Institution on War, Revolution and Peace at Stanford University. A version of this article first appeared on National Review Online (www.NationalReview.com).

One Response to "Fracking – Clean and Green"