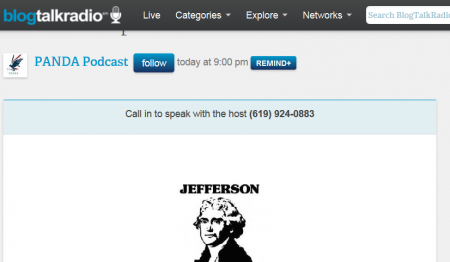 (Feb. 2, 2014) — PANDA Radio will be hosting a discussion on the corruption of the grand jury within the American court system.

The url for the show is here:  http://www.blogtalkradio.com/pandaunite/2014/02/03/our-corrupted-grand-juries

The media release on the show reads:

We have a stellar lineup tonight to help us understand how the Grand Jury system has been turned from “The Peoples Jury”, one that stood between the people and government tyranny into a rubber stamp at under the control of the government.

The danger to our liberty cannot be overstated for the Jury- Grand or Trial is the base upon all others stand. Destroy it and we are again Subjects instead of a free people with inalienable rights.

Dr. Roger Roots, J.D., Ph.D. Attorney and Founder, Fair Procedure Initiative, and nationally recognized criminologist, legal scholar and civil liberties activist. He is the only lawyer in the history of the U.S. 8th Circuit to ever overturn a conviction on venue grounds. Roots’ legal scholarship has been cited in the Harvard Law Review and the Yale Law Journal and been relied on by courts across the United States.

Co-Hosting with me, Chuck (Smithfix) Smith is Lorri Anderson, Blogger and internet researcher who has been often featured on “The Liberty Outpost” and other well-known forums.

Join us and learn something, or when we open the line chime in your input or questions are welcome. You can listen on your phone or speak to the Hosts and guests at: 619-924-0883.

As The Post & Email has reported, PANDA, founded by Dan Johnson, is resisting the elements of the 2012 NDAA bill which allow for indefinite detention of U.S. citizens by the president and U.S. military if they are suspected of terrorist activity.

The Obama regime has labeled veterans, homeschooling advocates, Christians, Tea Party members, illegal immigration opponents, and protesters against government abuse as “sovereign citizens” and potential “domestic terrorists.”  Darren Wesley Huff, who did not commit a crime on April 20, 2010, is serving a four-year federal prison sentence after attempting to observe a court hearing for Walter Francis Fitzpatrick, III after he exposed grand jury corruption in Monroe County, TN beginning in 2009.