The Lawsuit That Could Dismantle The IRS 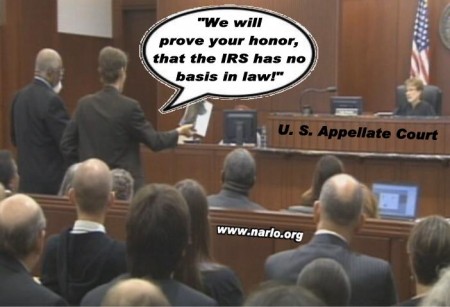 (Jan. 26, 2014) — DISCLAIMER:  Truth is an illusive goal when searching available information with the sole purpose to validate such information.  Consequently, we make no warranties, express or implied, that the information presented in this article is accurate in all respects.  Much of it was pulled from what we determined to be reliable sources.  It is the sole responsibility of the reader or taxpayer to verify the information for his or her own particular situation.  The material provided is for information purposes only and there is no attempt by the author to provide legal or accounting advice to anyone whatsoever.  Under no circumstances are we advocating that any American break the law ….. whatever that is.

ANOTHER IRS HORROR STORY:   In the parking lot was the VW with the Olivers, Stephen and Mona, surrounded by IRS agents and onlookers. The tow truck waited.  An onlooker named Freeman was giving verbal abuse to the agents and pointing at them.  Photographers and reporters were there, a story in the making.  With billy clubs, the agents broke the glass on the driver and passenger side of the vehicle and dragged the Olivers out of the vehicle over the glass.  Mrs. Oliver was screaming about her heart medication in the glove compartment.  Through the struggle, pills were scattered with the glass.  Freeman continued his barrage of screams, ‘Would you look at that? It’s the modern-day Gestapo.’ Photographers took it all in and it was reported in the national news.”
Donald W. MacPherson, tax attorney, from his book “Tax Fraud and Evasion: The War Stories”

In our two previous articles on the IRS this year, we discussed why the Congress would never abolish the IRS and why were thousands of taxpayers required to pay taxes, not filing tax returns, not paying taxes and getting away with it?  The reasons why Congress will never abolish the IRS are abundantly clear.  They use the tax code to control human behavior through what is called “social engineering” and the lobby built up around the tax code will never allow the Congress to repeal it.  Why some taxpayers are not paying taxes and getting away with it, is vague at best and rests in the complexity and lack of clarity of the Internal Revenue Code and its history, from the passage of the 16th Amendment to present day.

The question of the 16th Amendment’s ratification by the Congress and three-quarters of the states has been adjudicated and is no longer an issue of law.  Sixteenth Amendment arguments have been uniformly rejected by the courts in other cases, including United States vs. Thomas.

From the 16th Amendment, the U. S. Congress, under control of the Democrats, passed the Revenue Act of 1913.  The Revenue Act of 1913 had several other names centered around the word “tariff”.  The word “tariff” was used because tariffs were significantly lowered on many commodities in the Act.  But the real goal of the Revenue Act was actually enacting an income tax even though such a tax had been ruled unconstitutional in similar legislation in 1894.   President Woodrow Wilson lobbied the Democrats hard to get the Revenue Act approved and actually spoke to a joint session of the House and Senate to lobby for the Act.  The House voted in favor 281 to 139 and the Senate voted 44 to 37.  But the question is to this day, on whom does the tax apply?    (source: http://en.wikipedia.org/wiki/Revenue_Act_of_1913

“Congress did not pass any other law intended to impose a direct tax on income until 1939, when the Public Salary Tax Act of 1939 was passed.  The Public Salary Tax Act, Section 1, (which is now designated as Title 26 USC) imposed a tax upon the income of federal employees, U.S. citizens, and non-resident aliens.  The term “United States” is defined in 26 USC 7701(9), as: “When used in a geographical sense, the term ‘United States’ means only the states and the District of Columbia. Section 7701(10) defines the term “States” as follows: “The term ‘States’ shall be construed to include the District of Columbia when necessary to carry out the purpose of this title”.  It is always necessary to construe the term “States” as including the District of Columbia, because Congress did not include the fifty (50) states, nor the Commonwealth of Puerto Rico, Guam, the Virgin Islands, or American Samoa.  The Public Salary Tax Act of 1939 did not apply to Citizens of the forty-eight (48) States (now the fifty (50) States).

Once again we learn from this source: “After Pearl Harbor was bombed by Japan on December 7, 1941, Congress declared war, and passed the Victory Tax Act of 1942, in order to raise money to support fund the war effort. This was done in accordance with Article I, Section 8, Clause 12, of the Constitution of the United States of America, which provides:”

To raise and support Armies, but no Appropriation of Money to that Use

shall be for a longer Term than two Years;’

“In 1942, for the first time in the history of this country, the Bureau of Internal Revenue sent out 1040 Form to the general public in the forty-eight States. This was done even though the Victory Tax Act of 1942 only applied to citizens and residents of the District of Columbia, and non-resident aliens.”

“Most people thought that the Victory Tax Act required everyone to file a tax return and pay tax on “income”, so they voluntarily filed a Form 1040 in 1942, 1943 and 1944.  On May 29, 1944, Congress repealed the Victory Tax Act of 1942, but the news media did not publicize that fact. In 1945, the Bureau of Internal Revenue decided to mass mail 1040 Forms to the general public, just to see what would happen.  Why not? The vast majority of the people had voluntarily filed tax returns before.  Since the public believed that the Victory Tax Act was mandatory in the then forty-eight (48) States, and did not know that it had been repealed, they filled out the 1040 Forms and mailed them in, along with their checks.  The Bureau of Internal Revenue was ecstatic and committed itself to continue perpetrating the fraud on the Citizens of the forty-eight (48) States.  So, the Bureau of Internal Revenue has continued to send out Form 1040’s each and every year since.”

SIDEBAR:  As further evidence of an out-of-control government bureaucracy, the Taxpayer Advocate Service, which is an independent office within the IRS, has just released a two-volume report describing the Mafia tactics that are being employed by the IRS. The Executive Summary is 76 pages long.   You can read this scathing report at the following link:

There are so many questions as to the validity and constitutionality of the 16th Amendment, whether income can be legally taxed on U. S. Citizens under the Constitution and the 16th Amendment and the creation of the IRS as a lawful taxing entity, that those questions beg for clarity and legal certification.  The Internal Revenue Code is so complex and convoluted, it cries out for adjudication from the Highest Court in the land, the U. S. Supreme Court.

Other sources say that these questions have already been adjudicated but not to the satisfaction of millions of Americans who have been slowly learning over the last several decades that they have been hoodwinked by a government that has shoved the IRS and the income tax down the people’s collective throats, quite possibly by fiat, just like the Democrats in Congress and the President shoved Obama Care down the people’s throats ….. in the name of more Karl Marx’s social engineering and social justice.

Our legal system requires that a person suing another person, a corporation, or the government, must have standing and can demonstrate damages.  We are proposing that all Americans who have been “damaged” by the IRS and there are millions of you, file a collective lawsuit in the U. S. District Court where all of you live, in each U.S. District in America, alleging violations under 42 USC, Sections 1983 and 1985 and further claiming that the damages you incurred resulted from the IRS applying law, under the color of law, without any demonstrable foundation of law.  If you believe you have been “damaged” by the IRS, we would like to hear from you.

If all of these lawsuits were filed at roughly the same time, they could be merged into a national, massive class action lawsuit, where all of the questions we have raised in this article and more, could move to the Appellate courts and then on to the U. S. Supreme Court.  We would lead this challenge if we can find SUPPORT among our readers to provide the necessary RESOURCES for such a challenge on a national scale.  To mount this challenge, our goal is to establish a legal defense fund in the amount of $10,000,000 at $10.00 from 1,000,000 disgruntled, abused taxpayers, to build a very powerful, unbeatable legal team to lead the class action.

If the IRS and the IRS code are found to be illegal and the High Court so decided, it would be left to the Congress to come up with a new taxing authority to replace the IRS.  One such flat tax scheme has been proposed in HR-25 by the Fair Tax Organization and sponsored by 73 congressional co-signers in the House, with eight Senator co-sponsors of S-122, the Senate equivalent.  To be successful, a good portion of the nation would have to get behind this effort.  (see http://www.fairtax.org/site/PageServer)

The fact is, the IRS will never be abolished by an act of Congress, much less the president, which we discussed in our first article entitled “Why Congress Will Never Repeal the IRS.”  The confusion and complexity of the IRS Code and its unequal enforcement and abuse will continue to be a significant problem for all Americans until the matter is settled once and for all.  The only way to clearly define the power of the IRS and the IRS Code and its foundation in law is to adjudicate it in the courts.  The only way to invalidate the IRS and repeal it, if it is indeed unlawful, is to prove its illegality in the environment of the courts.  If such a class action lawsuit were to take place on a massive scale, don’t underestimate the power of the government to submit legal arguments, valid or invalid, justifying the IRS’s existence, even though there may be no clear law for such justification.  That’s right.  The U.S. Government, politicians and bureaucrats lie to consolidate their power over you all the time and have since the ink was dry on the Constitution!  If the truth be known, representative government is not only messy, but it is highly susceptible to systemic corruption if the people aren’t paying attention.

We stated in our last article that we would share our experiences in filing FOIA requests with the IRS.  Because of the long length of this article, we decided to move that information to the “FOIA Requests” page on our website.

Ron Ewart, a nationally known author and speaker on freedom and property issues and author of his weekly column, “In Defense of Rural America,” is the President of the National Association of Rural Landowners, (NARLO)  (http://www.narlo.org), a non-profit corporation headquartered in Washington State and dedicated to restoring, maintaining and defending property rights for urban and rural landowners. Mr. Ewart is now engaged in a plan to expose the Internal Revenue Service with his website (http://www.attackwatchspies.com).  He can be reached for comment at ron@narlo.org.

The Lawsuit That Could Dismantle The IRS added on Sunday, January 26, 2014

4 Responses to "The Lawsuit That Could Dismantle The IRS"