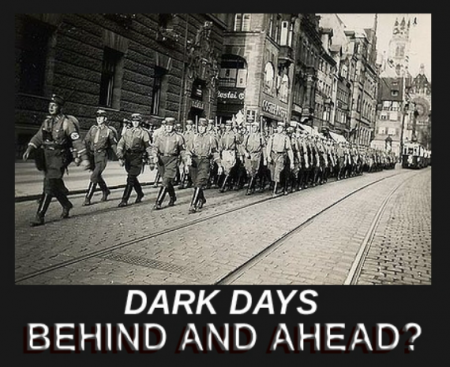 (Jan. 25, 2014) — What if I told you that the Health-care legislation grants Obama the authority to create his own personal Army Corps in violation of the U.S. Constitution? On July 2, 2008 Obama gave a speech that has been stricken from most internet and news services.  He said: “We cannot continue to rely on our military in order to achieve the national security objectives that we’ve set.” He went on to say: “We’ve got to have a civilian national security force that’s just as powerful, just as strong, just as well funded.”

What if I told you provisions were inserted into the health-care legislation 24-hours prior to a vote that gave Obama the authority to create an “illegal” Reserve Army Corps? Do I have your attention?

Before I get technical concerning the violations of Constitutional and statutory law and turn you off, I ask you consider and compare the similarities between Hitler’s Nazi regime and Obama’s administration. Am I saying Obama is a Nazi? No. However, I am saying that the handwriting is on the wall that should raise red flags – yes, I said: “Red Flags?”

Ask yourself, why does Obama believe we need a Civilian National Security force  under his sole control “…that’s just as powerful, just as strong, just as well funded”? Let me remind you that the United States has the most advanced military on the face of the earth?

While building this Civilian Security force the Obama administration has been steadily reducing the size of our military, expunging 100’s (to date 233-plus) of highly decorated Generals, Admirals, down to Majors and replacing them with like-minded cadre of this Administration’s  character.

Since September 12, 2012, the Obama’s administration has been graduating his ready reserve under the direction of Homeland Security Corps, recruited from Ameri-Corp.  These naive young men are being assigned to the DHS and FEMA. I remind you the stimulus package included $1,500,000,000 to be allotted to Ameri-Corp. We know now that those monies are being used to create an Army. When you hear Obama calling our youth to “service” be forewarned, it’s sort of reminiscent of Hitler’s Youth (Brown Shirts). If you don’t remember Hitler’s personal Corps, the SA, and SS Corps, please take the time to research them on the internet.

Are you aware that the DHS has purchased in excess of 2-billion rounds of ammunition accompanying weaponry to include purchasing heavily armed fighting vehicles to supposedly be used for population control as set forth in Executive Orders? Since 2010 to present, Obama has issued and signed into law while circumventing Congress numerous EO’s that suspended your Constitutional as well as civil rights. In truth, as written Martial Law has been enacted.

Haunting questions come to mind: if our country is in so much danger that we need a Civilian National Security Force, why reduce the size of our military? Why expend needless funds on a civilian Military Corps; why is the Obama administration arming every Federal bureaucracy; and why is Obama firing the most experienced military leaders this country has?

Here’s a question that has me wondering; has Smokey the Bear turned into a terrorist that this Administration is training special “Sniper Teams” within the Park and Forest Services? Does the IRS need M-16’s, or the Department of Education 12 Ga. Riot guns?

Contemplate for a moment this Administration’s obsession with disarming the American people? I remind the reader that over a 170-million civilians were murdered by their own governments following civilian disarmament. I remind the reader, no Communist/Socialist Dictator has ever relinquished power without bloodshed and without disarming their people.

Even the most notoriously liberal federal Court in the United States, the 9th Circuit, stated in Nordyke v. King:  “The right to bear arms is a bulwark against external invasion. We should not be over confident that oceans on our east and west coasts alone can preserve security. We recently saw in the case of the terrorist attack on Mumbai that terrorist may enter a country covertly by ocean routes, landing in small craft and then assembling to wreak havoc. That we have a lawfully armed populace adds a measure of security for all of us and makes less likely that a band of terrorist could make headway in an attack on any community before more professional forces arrived.”

Most importantly the Court unanimously went on to say: “The right to bear arms is a protection against the possibility that even our own government could degenerate into tyranny, and though this may seem unlikely, this possibility should be guarded against with individual diligence.”

Japanese Admiral Yamamoto, who had a clear pathway to our West Coast following the attack on Pearl Harbor when asked why he didn’t attack our mainland, stated: “I would never invade the United States. There would be a gun behind every blade of grass.” Could it be this Administration remembers his words and thinks it best to disarm us in order to better control us?

Sun Tzu tells us “war is strategy”, if you know your enemy you will defeat him. Make no mistake about it, Mr. Obama and his cartel are enemies of the United States. The truth be told, the most dangerous and unconstitutional sections of Obama-care contain provisions that have nothing what-so-ever to do with health – just the opposite. The scariest provision grants Obama the unconstitutional authority to create a “Civilian Ready Reserve Corps” under his personal jurisdiction.

First, it’s important to know that the Health-care Act HR3590, in their haste to enact this legislation, the Democrat/Marxist failed to include a “severability” clause. Therefore any Constitutional violation renders the entire act “null and void” despite what any Hoodlum(s) in Black-robes decrees.

It’s up to you to decide whether the United States Constitution means what it says: Article 1, Section 8, Paragraphs 12, states; “The Congress shall have the power …to raise and support armies, but no appropriation of money to that use shall be for a term longer than two years. The “Act” HR. 3590 as written unconstitutionally funds the Ready Reserve Corps for four or more years.

Therefore, it is without legal argument that the provisions in the “Act” that creates an Army Corp violates the U.S. Constitution (“positive law”) renders the “act” null and Void.”

Secondly, the “Act” violates the statutory law, “The Posse Comitatus “Act” strictly forbids the use of American military in civil law enforcement. The drafters of HR 3590 stealth-fully side stepped relevant parts of the “Posse Comitatus “Act.” Provisions set forth therein allow the President to activate any state National Guard without Congressional approval or the Governor of said state, who is the Commander and Chief of the Guard, void a Declaration of War. Sure fits in with Marshall Law, that would normally come under local authority or with Congressional approval enforced by our military.

Place the National Guard to include citizens he deems necessary under his sole command as a in his security Corps grant the usurper unfettered authority.  The “Act” grants unfettered authority to deploy his “Ready Reserve Corps” into any State circumventing the  “Posse Comitatus “Act.”  Without a specific request or permission of the Governor of said State — so much for State sovereignty and existing law.

Under the “color of law” the “Act” in conjunction with recent Executive Orders circumvents Congress and allows the Executive Branch to conscript individuals into active duty without compensation void a Declaration of War [see, section 203, b-d], to implement a draft under the guise of a medical or national emergency – real or otherwise, on what he perceives to be a national emergency, not Congress.

It’s time the legislature wakes-up from their stupor and defund Obama-care in its entirety and charges those with “High Crimes and Misdemeanors” that failed to read the “Act” and/or that ignored the violations of the U.S. Constitution.  For no other reason than the above, “We the People” must rid Congress this 2014 election of every reprobate that voted for HR 3590 a/k/a Obama-care.