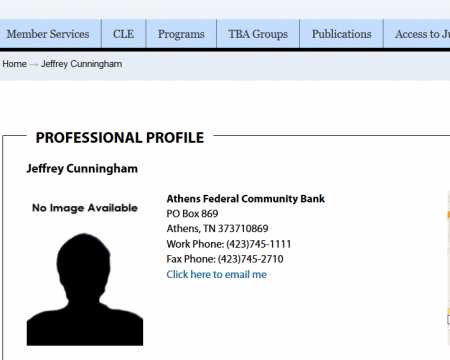 (Jan. 23, 2014) — As reported by CDR Walter Francis Fitzpatrick, III (Ret.) earlier today, the foreman of the McMinn County grand jury, Jeffrey Cunningham, is an attorney and bank executive, now serving his third term in his “command” position over the grand jury.

In December, two new groups of individuals were chosen by Criminal Court Judge Amy Armstrong Reedy to serve as grand jurors for 2014.

While Tennessee state law requires that 13 randomly-selected grand jurors comprise a grand jury, the courts routinely select 12 members and then add in the judge-appointed foreman to make 13.

In September, the state’s deputy attorney general issued a brief in a a case on appeal filed by Fitzpatrick’s attorney, Van Irion, stating that the foreman is a separate position from the grand jury appointed by a judge outside of the vetting process approved by the legislature.  Fitzpatrick and Irion had contended that then-Monroe County grand jury foreman Faye Tennyson had over-served her term by remaining in the position for a second year.

Later on Thursday, Fitzpatrick discovered that Cunningham is an active member of the Tennessee Bar Association (TBA) in the areas of “Corporate Counsel Section, Criminal Justice Section, TBA Members.”  On his public profile, Cunningham states that his “practice areas” and “areas of interest” are “Corporate Counsel, Criminal Law – Prosecution.”

Reedy has said that she wishes to see citizens of her community serving “one million man-years” in prison as a result of her tenure on the bench.

For more than four years, Fitzpatrick has been reporting on rigged grand juries, trial juries, and foremen serving in violation of Tennessee law.  A decision has not yet been issued by the appeals court in his case, which stemmed from his observation of Reedy hand-picking jurors on December 7, 2011.

“I’ve known for some time that Cunningham was trained as an attorney, holding a JD. I did not learn until this morning that he is actively licensed in Tennessee State as a practicing attorney listing as his areas of interest and practice: PROSECUTIONS!” Fitzpatrick said in an email.  Tongue-in-cheek, he added, “A PROSECUTING ATTORNEY PERSONALLY APPOINTED BY CRIMINAL COURT JUDGE AMY F. ARMSTRONG REEDY AS A NON JUROR McMINN COUNTY GRAND JURY FOREMAN! WHATEVER IN THE WORLD COULD GO WRONG WITH THAT??!!”