“SOVEREIGNTY RESIDES WITH THE PEOPLE”

by Nicholas Purpura, ©2014, blogging at TPATH 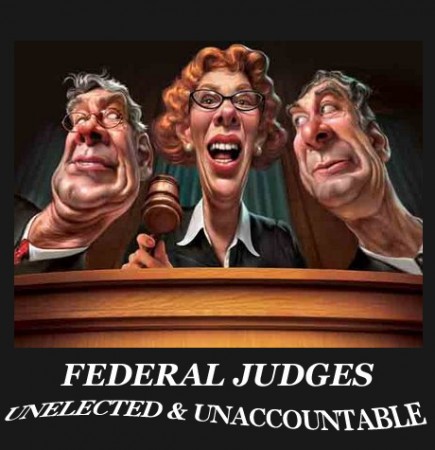 (Jan. 22, 2014) — By what authority do those highbrows in black robes think they have to violate the Constitution and by extension, the will of the American people?  Justices are warranted to determine the legality of a law or an activity, as relates to the U.S. Constitution and then render an opinion thereon.   Redefining legislation or altering its wording or intent, is not legal.

Far too many and far too often judicial activists operate on or with derogation of law.   They assume it’s in their authority to shape society and define social justice.  It is not.  Such activity, by its very nature, is illegal and warrants impeachment.   This applies to every violation of the Constitution, by any elected official, in any position, everywhere in this country.  Need confirmation on this? Read Justice Story’s  “Commentary on the Constitution” and the utterance of the founding fathers.  It is Congress and State Legislators who better cease emulating Hitler’s Reichstag and begin following  the heroic founders of this country.

The latest outrage has just been committed by U.S. District Court Judge Terence Kern, lending his considerable lack comprehension in yet another attack on traditional marriage.  Hailing from  Oklahoma and appointed by one of America’s virtuous leaders, Slick Willie, he has proffered this morally vacuous statement:  “The Court holds that Oklahoma’s constitutional amendment limiting marriage to opposite-sex couples violates the Equal Protection Clause of the Fourteenth Amendment of the U.S. Constitution.”  This interpretation would, by extension, allow individuals extraordinary leeway for any number perversions.  This Amendment, as with all of our Constitution, must be applied consistent with the morality and culture of the many and not the aberration of the few.

Judge Kern should be reminded that sovereignty resides with the people. The people of Oklahoma are the masters, not the servants, and servants do not make rules for their masters.  Laws cannot be enforced contrary to the intent of the people.  In fact, the Supreme Court recognized in 1829 see, Lansing v. Smith:  “People of a state are entitled to all rights which formerly belong to the King, by his prerogative.” In fact case law affirms, as far back as 1794, that sovereignty was, and remains, with “We the People.”

Please pardon the term, but let’s get something straight.  The Congress of the United States voted on the “Defense of Marriage Act.” The intent of the legislation was to protect the sanctity of marriage.  Congress recognized the will of the people. Yet, ideology driven demagogues believe they have the authority to re-define the law and the meaning of marriage.   They continue to ignore the will of the people and assert judicial supremacy over them and the lawmakers they have elected.

Despite the teachings of just about every religion, which describes sodomy as a perversion and a sin, the effort to redefine immorality to normalcy drives their agenda.  Whether one chooses to live life in a specific way or there is no personal control over those urges, the fact remains, same-sex joining is a perversion and not normal.   If the affliction is suffered by 1% or 10%, it is still a perversion not unlike many others.  To assume the vast majority of society should ignore their religious beliefs and accept these anomalies as normal is what many people have objected to.  Redefining marriage, a religious sacrament and the moral bindings of families, is not acceptable.  The overwhelming majority of the people in the country have said so, have voted so.  This liberal judge, appointed by a morally deficient president is breaking the law when he rules against the people.

He nor any judge has the authority to violate the “Code of Statutory Construction.”  Such behavior warrants impeachment, especially for ordering his (Obama) Attorney General not to uphold the DOMA law.

A majority of the world defines traditional marriage as a union between a man and woman.  A majority of society has no problem with same-sex civil unions that afford same-sex couples the same benefits as heterosexual couples.  In fact, the professional litigants, anticipating a rise in legal activity, are a hundred percent behind same-sex unions.

To say the judiciary has been infiltrated by mindless dysfunctional elites is an understatement.  Unfortunately, Judge Terence Kern is not a rarity.   Another unelected and unaccountable Federal Judge just ruled all traditional marriage laws are “irrational.”   Where is this type of thinking headed? The degeneration of our culture is where.  Can marriage licenses for polygamy, pedophilia or bestiality by far over the horizon?   Think this is a stretch?  Stay tuned.

Time to Slap Down the Judicial Oligarchy added on Wednesday, January 22, 2014

2 Responses to "Time to Slap Down the Judicial Oligarchy"