(Jan. 18, 2014) — Ruth Bryant White, CEO of Breaking News Journal Entities, wants the public to “cut the cable” in order to restore wholesome programming to their homes, particularly those with children.

Like The Post & Email, Bryant objects to the violence, strong language, and “media perversion” prevalent in cable television programming today.  “The media is a major influence in the decay of our God, our Families and our country,” White told a group of new media entities prior to a conference call on January 10.

White has launched a campaign in which cable customers can switch to using a Roku, which operates on a Wi-Fi basis from a home or business internet connection.  Founded in 2002, Roku boasts “millions of units sold” and an executive team comprising “an impressive group of successful inventors, entrepreneurs and leaders who have proven track records of building successful high-growth companies with award-winning products.”

As noted on the Breaking News Journal website, on January 6, Roku launched “Roku TV,” which converts a television to a “Smart TV” in partnership with television manufacturers TCL and Hisense.

There are currently four sizes of Rokus available, three of which are compatible with virtually any television set.  Rokus range in price from $49.99 to $99.99 with free shipping and a 30-day, money-back guarantee.

Roku’s Facebook page states that “Roku delivers the biggest & best selection of streaming entertainment to your TV—whenever you want it, without monthly fees.”

Bryant will hold the “Cut the Cable Revolution” prior to the Super Bowl with a 24-hour radio-a-thon on Freedomizer Radio from January 31 to February 1.  “As a show of Unity we are asking people to unsubscribe to the cable companies after the SUPER BOWL. If this event is successful we will do it again next year,” White said.

Along with her husband Steve, White plans to launch her own “Breaking News Journal TV Channel” to broadcast shows featuring investigative journalism, travel, cooking, shows designed for teenagers, educational programming, and talk shows, all in a family-friendly setting.  A promotional video details some of the contributors expected to take part in the effort to include The Post & Email.

Sponsors of the BNJ “Cut the Cable” promotion are CthePower and the SportzAddix Media Network.

The Post & Email asked White several questions about Cut the Cable as well as her future plans for BNJ.

Q.  How and when did you find out about Roku?

A. I found out about ROKU a couple of years ago and purchased one. I love it.

Q.  How is it working?  Do you notice any difference between cable service and the Roku service?

A. Not a lot of senseless commercials. I can see programs when I want, and I don’t have to purchase any channels at all if I don’t want. They have free channels. You cannot get that flexibility with any cable packages I have heard of.

Q.  Is there a significant money savings with Roku?

Q.  What are some other benefits of dropping cable TV and installing Roku?

A.  For us it was like Jonesing (Translation:  Getting used to being in control instead of the cable company telling me what I have to have. I consider cable to be the COMMON CORE of media. You pay for all of the filth that you don’t want to see, because you are paying for these programs to be produced by having cable. With Roku you don’t purchase any channel you don’t want. It works off of Wifi connections.

Another advantage is that we can Live Stream events using Pay-Per View-for large celebrity-type events such as car racing, or for birthday parties etc., where families can see this all over the world if they have a ROKU.

Q.  How difficult is it to switch to Roku?  How can people get involved and get started?

A.  Since Breaking News Journal is an authorized agent, they can go to www.breakingnewsjournal.net and see the ROKU link and check it out.  A person can chat with representatives, etc.

Q.  How does Roku fit into the larger purpose of Breaking News Journal?

A.  We can have the Breaking News Journal promotion on the same page as Hulu Plus, Fox, CNN, MSNBC, HBO, Netflix and more. As we produce programs for the Breaking News Journal TV Channel, our producers will be able to have free creative reins as long as they stay within the principles of having clean TV. No cable company would ever consider giving us a chance to have our own TV channel.  We are putting parents back into the driver’s seat of their children’s lives and what they choose to purchase so families can have clean, educational fun TV for all in their households.

Q. What are the latest developments at BNJ?

A.  The latest developments besides everyone getting their breaking news stories on the www.breakingnewsjournal.net site is that people can get even more news from Breaking News Journal/Facebook, Twitter, and BNJ Global on Twiiter. We have two international reporters, one out of Japan and the other out of Israel. Our TV channel launching will bring programs of clean music (different genres), investigative reporting, cooking, travel, educational, fashion, food, indoor/outdoor sports and more, as shown in the promotional video trailer. Go to www.breakingnewsjournal.net. The Post & Email will benefit, because as your people support us they will be supporting your work to be seen all over the world on ROKU TV.

The Pre-Super Bowl “CUT THE CABLE” REVOLUTION Radio-A-Thon on January 31, 2014 is a major kickoff point for people to start getting involved, as we are telling people to get their ROKU boxes now, then disconnect their cable after the Super Bowl so they can get used to ROKU. People can keep in touch with those who will be participating with the franchises that are working with Breaking News Journal, which are SportzAddix 24-Hour News Network, U Talk Radio, and CthePower. Cheryl is doing a wonderful job with the line-up and times of those participating. I am asking for those who want to be sponsors, advertisers or contributors to contact us and click on the red slipper on the site and contribute.  Go to www.cthepower.org to check out how to call in for the Radio-A-Thon.

Ruth is asking everyone who is able to contribute $10 to her effort to bring clean television programming into American homes.  At her fundraising website, White wrote, “If you want to see change, you can contribute now to the producers who will make it happen. You can also go to www.breakingnewsjournal.net and click on the ROKU box and save a lot of money. It will also put you back in the driver’s seat so you can take control of what your children watch. Now is the time to ACT.”

White’s husband, Professor Steve White, is founder of the Master Educator’s XChange, which provides alternatives to public school education.  Both Ruth and Steve oppose the new Common Core educational curriculum, which has been rejected by several states after they initially accepted it.

Ruth has produced the Post Oscar Showcase and other Hollywood shows, and more recently, “Occupy vs. Tea Party.”  She is also an ordained minister and participates in a charity for childhood leukemia.  White views the BNJ News Entities as “the town square of new media.” 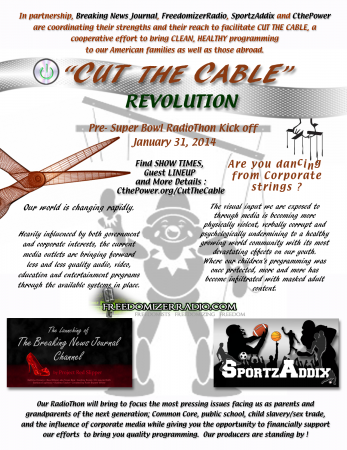