“ICE FORMS INSIDE OUR TOILETS”

by Sharon Rondeau, as told by Todd Sweet 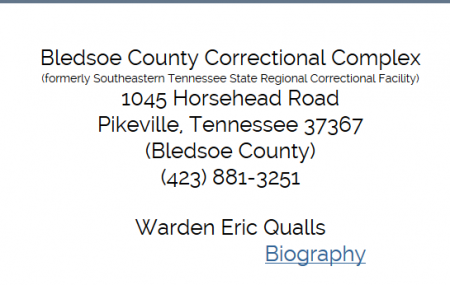 (Jan. 16, 2014) — A citizen who received a letter from Tennessee state prison inmate Todd Sweet sent the text of a letter received on Thursday reporting substandard temperatures inside the Bledsoe Prison located in Pikeville.

In his letter, Sweet wrote:

On Wednesday, January 8th, the Chattanooga Times Free Press printed an article on page B4 entitled “Heat goes out at Bledsoe Prison.” This just so happens to have occurred in my pod, pod 24A. The facts in the article are off.  They say the inside temperature is “65 degrees.”  That is a lie – told to the reporter to cover up the truth.  The truth is that they came in and shot the temperature with a mobile device.  My room because it is in the corner and 2 walls are exposed to the elements – shot at a non livable condition of 38 degrees.  A room that was tested further down was shot at 41 degrees.  There has been no heat, and the only thing we can do is to cover our vents because they are blowing cold air and ice forms inside our toilets.

The administration is now forcing us to uncover our vents which is making it that much colder.

The reporter was told that the problem was being addressed.  That too is a lie.  The contractor has not been paid by the TDOC so they are refusing to fix the problem.  It is now Thursday the 9th, there still is no heat.  The heat never “went out.”  There has been no heat in 24A pod since my arrival 2.5 months ago.  The problem is that we the inmates could stand up against the cold previously.  Now that the temperature has dropped so harshly it is unbearable.

Grievances have been written because this freezing is against our 8th amendment right to protection from cruel and unusual punishment. The grievance administrator simply says it is unreliable and dismisses the issue every time.

So if you would please…….contact the Chat. Times Free Press’s Breaking News Staff, at 423 757 NEWS, and repeat all of what I said in this letter so that we can be treated like human beings instead of animals.

Furthermore the administration will not issue gloves and hats to protect us from the cold.  We have to go to to and from medical, to and from chow, and inmates like myself have to move from building to building to meet with “clients.”

This situation is almost unbareable. (his spelling).  Totally ridiculous.

My bones ache and to warm up, one needs to stand in the hot shower 2 or 3 times per day.

At 9:50 p.m. EST,  The Post & Email contacted Bledsoe Prison and was told that there was no one who could attend to our report that some of the cells in the facility are between 38 and 41 degrees and “the men are freezing.”  We were advised to call back in the morning to speak to Warden Qualls.

The article to which Sweet referred in his first paragraph is here.