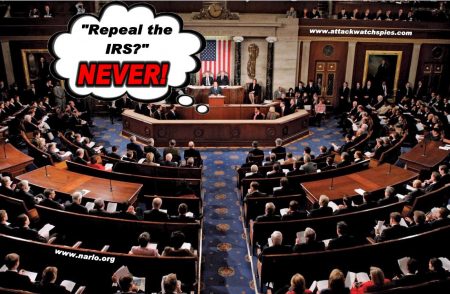 (Jan. 12, 2014) — “In June, 1988 Kay Council of High Point, NC came home one night to find a note from her husband, Alex: ‘My dearest Kay – I have taken my life in order to provide capital for you. The IRS and its liens, which have been taken against our property illegally by a runaway agency of our government, have dried up all sources of credit for us. So I have made the only decision I can. It’s purely a business decision… You will find my body on the lot on the north side of the house.’ At the end of a nine-year battle over a disallowed tax shelter, the IRS claimed that the Councils owed $300,000 in taxes, interest, and penalties. When their financial resources were exhausted, Mr. Council committed suicide to provide Mrs. Council with $250,000 insurance money to continue the battle. Ironically, Mrs. Council eventually won a court ruling that she and her husband owed the IRS nothing – the IRS deficiency notice had been sent four months after the statute of limitations had expired. Mrs. Council, 48, said, ‘I was cheated of growing old with the man I love.'”  Excerpt from an article by Randy Fitzgerald, staff writer at Readers Digest, republished in the March 1991 Issue of Reason Magazine.  Full story was republished by Devvy Kidd in 2003 at this link:  http://www.devvy.com/200311031846.html.

The above story is just one of tens of thousands, if not millions, of Americans who have fallen afoul of the arrogant, abusive and corrupt Internal Revenue Service (IRS).  Each American who is forced to confront the IRS must do so all alone with very little, if any, assistance from anyone else.  Most Americans live in abject fear of the IRS and don’t have the resources or knowledge of the law to fight this out-of-control mega-monster that shows no mercy and knows no law other than the law it invents to suit its purposes.  But how did we get here?  We will cover one of the major reasons a little later in this article.

The history of the income tax dates back to the time of Kings.  In the United States the first income tax occurred in 1862 during the Civil War when President Lincoln declared the need to raise taxes to fund the war with the South.  The tax was later repealed in 1872.   The 16th Amendment, allegedly ratified by the Congress and 42 of the 48 States in 1913 under President Woodrow Wilson, became the foot in the door for the federal government to insert its power and control over our individual lives:

“The Congress shall have power to lay and collect taxes on incomes, from whatever source derived, without apportionment among the several States, and without regard to any census or enumeration.”

There are many questions and arguments that have been raised about the constitutionality of the 16th Amendment and whether it was properly ratified by the Congress and three-fourths of the states.  Some of those questions have been answered in cases brought before the High Court but still many more questions persist.  Some decisions by the High Court only served to muddy the waters.

But alas, the taxes collected in accordance with the Constitution were not enough, and the bankers who loaned vast sums of money to the United States government were uneasy about their investments.  Congress, pressured by the bankers, capitulated to their lobby and the 16th Amendment was born which created the Federal Reserve and the Internal Revenue Service under a progressive tax rate system, where the higher earners pay a significantly higher tax rate in direct violation of the equal protection clause of the U.S. Constitution.

We are told that the Federal Reserve was created to smooth out the peaks and valleys of our economic system, as prior to the 16th Amendment, bank runs and failures were common.  Perhaps there may be an element of truth to this argument.  However, the bankers needed a steady, determinable source of repayment to secure their loans, and what better way to do it than to tax the income of all Americans and create an agency that puts the fear of God into those Americans to insure compliance of a so-called voluntary law.  This could be called “security for a loan at the point of a gun where the government holds the gun and your head is where it is pointed.”

But humans are a messy lot.  They can act either rationally or irrationally.  Most humans act within average modes of social acceptability at certain times.  As times change, the average mode changes and the people, en masse, change with it.  Given human unpredictability, the elites and educated idiots in our society keep coming up with methods and practices to keep society within certain envelopes of behavior.  All of the elite’s methods and practices are substantiated by scientific research and studies, of course, and cannot be argued against by the masses because the elites obviously know better.  Does any of this sound familiar?

In the late 1800’s a new term surfaced that started the process of measuring social behavior and creating methods to control it on a grand scale.  Social scientists and economists jumped on this new term with a vengeance.  The new term was called “social engineering,” and it opened up a very large door to modifying and nudging social behavior of the masses through actual laws and subliminal messages.  (To read more about the history of social engineering, click HERE.)

From this “research” came other terms such as income inequality, social equity and social justice.  Social justice is the current byword of the progressive movement, and Progressivism actually got its start during the heyday of the Industrial Revolution at the turn of the 20th Century.  Democrats will live and die on the term “social justice.”  Social justice got us many large government entitlement programs from Social Security, to Medicare, to Medicaid, to farm aid, food stamps, welfare and now, Obama Care.  These programs bought millions of votes from those who conveniently forgot the definition of liberty.  Except Democrats have used the term to rob, by force of law, “those with the greatest capability and give the ill-gotten gains to those with the greatest need” (Karl Marx).  However, without a means to pay for their Social Justice, Democrats have set the stage for national bankruptcy with an ever-increasing, run-away national debt.

President Hoover, in the late 1920’s, retained the University of Illinois and Harvard University to conduct a study on how to control people through their subconscious minds.  Not surprisingly, the study was paid for by the Rockefeller Foundation, one of America’s leading bankers and industrialists.  Rockefeller had a vested interest in controlling people to assure his investments in the U.S. Government were secure.   From those university studies laws were passed to implement the findings.

In a free country, where individual rights are the hallmark of its foundation, controlling people through their subconscious minds is hardly the purview of a government charged with the solemn duty of preserving, defending and protecting those individual rights and liberties.  Once again, this gives rise to the phrase, “power corrupts, absolute power corrupts absolutely.”

But let’s get back to the IRS.  What better way would there be to control the behavior of the people on a grand scale than through “playing” with how the IRS collects taxes?  Tax incentives, tax disincentives and wealth redistribution all fall under the umbrella of the IRS, passed by the U.S. Congress and signed into law by the President.

Each year the Congress passes law after law that are then given to the IRS to enforce, through tax policy and the infamous and ever-more complex IRS tax code, Title 26 USC, etc.  As a result, the IRS has grown exponentially to implement the “social engineering” laws that Congress passes and the President signs.  Obama Care is a prime example of a massive law being dumped on the IRS to enforce.  It has been reported that over 16,000 new IRS employees will be required to weave Obama Care into tax law and administer its provisions.  (That’s about $1,600,000,000 of your tax money to pay for those 16,000 new employees.  Today, the current budget for the IRS is well over $12 Billion.)

Americans naturally blame the IRS because they are the messenger and enforcer of the tax policy.  But what Americans should be doing is blaming and directing their ire, anger and ferocity on the President, the U.S. Congress and the state legislatures.

Many attempts over the years have been made to reform the IRS.  Many of those attempts fell on deaf ears in Congress, the reasons for which should be abundantly clear.  However, in 1998 Congress passed the “Internal Revenue Service Restructuring and Reform Act” (the Act).  One of the high points of the Act was to put the burden of proof on the IRS for an alleged infraction of the IRS tax code.  For those interested in studying the details of the Act may do so HERE.  (http://scholarship.law.marquette.edu/cgi/viewcontent.cgi?article=1406&context=mulr)

But there is one other major reason the Congress will never repeal the IRS.  The powerful accountant-CPA-tax attorney lobby, built up around the IRS for 100 years, will stop the Congress in their tracks if they make any attempts to abolish or significantly rein in the IRS.

So you see, ladies and gentlemen, the Congress, or the President, love the IRS.  They have no intention of repealing or abolishing it because they use the IRS for social and economic engineering against you to control your behavior.  You just think you live in a free country.  You are being directed and manipulated into controlled behavior by overt, covert and subliminal acts by your government and even more directly through the IRS tax code.  You just don’t know it because you have capitulated to whatever government asks of you without question.  This act of omission has brought us to the deplorable and untenable condition we find ourselves in today.

There is a way to take control, repeal, or dismantle the IRS rather than lobbying Congress or at the ballot box.  We will discuss this method in the third installment of this series of articles on the IRS.

Next week we will take up the issue of why so many income-producing Americans are not paying taxes, through the operation of law.  The article is entitled, “Why Are Thousands of Producers Not Paying Taxes?”

If you are having difficulties with the IRS, we encourage you to visit our IRS tax website at http://www.attackwatchspies.com, where you will find a wealth of information, some of which will be useful and some of which you probably didn’t want to know.

Ron Ewart, a nationally known author and speaker on freedom and property issues and author of his weekly column, “In Defense of Rural America,” is the President of the National Association of Rural Landowners (NARLO) (http://www.narlo.org) a non-profit corporation headquartered in Washington State and dedicated to restoring, maintaining and defending property rights for urban and rural landowners.  Mr. Ewart is now engaged in a plan to expose the Internal Revenue Service with his website (http://www.attackwatchspies.com).  He can be reached for comment at ron@narlo.org, or by phone at 1 800 682-7848.

Why Congress Will Never Repeal The IRS added on Sunday, January 12, 2014

3 Responses to "Why Congress Will Never Repeal The IRS"