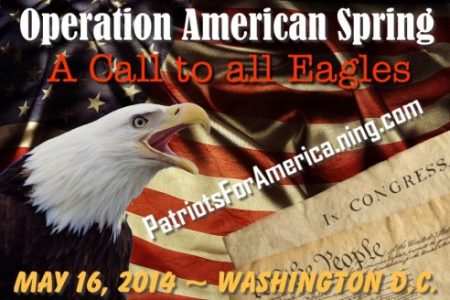 (Jan. 6, 2014) — Just as the 1836 battle of the Alamo was a pivotal event in the Texas Revolution, so have been the one million truckers, the biker run and the veteran march on DC.  Important but they were ignored, cast aside as little more than irritants by the White House and Congress.  Disdain toward “we the people” must and will stop.

These patriotic initiatives were pivotal events that had, like the Alamo, the opposite effect desired by the corrupted government officials of the USA.  After the Alamo slaughter, reinforcements came and turned around the war.  Operation American Spring will do the same.

Like sheep dogs that protect the sheep from ravenous wolves, Operation American Spring will produce modern day sheep dogs taking up the struggle with the resolve of our Founding Fathers. The sheep dogs are gathering, we have the shepherds, our eagle claws are being sharpened, eyes focused, and we have the commitment to stand up and challenge government leaders in Washington, D.C. who are reflecting tyrannical, despotic behavior.

We are the Patriots who will begin the restoration of the Republic of the United States of America.  “We the People” are picking this fight, not because we want it, we have no other choice. We will struggle with a determination that politicians are unfamiliar with…willingness to strive to the last full measure of our being for our country, rather than surrender to self-serving, betraying, corrupt elected officials.

We will no longer tolerate being ignored by those who were elected to be servants of “we the people”, but evolved into ravenous wolves seeking self-gratification, trying to tear America and our Constitution asunder to enslave us.

God willing, we will hasten our nation to Constitutional principles that were laid out by our Founding Fathers, the original sheep dogs.  The sheep will once again graze on the plains of the American Dream in peace, liberty, and freedom. Wolves will be banished.

Operation American Spring will launch the first phase of the plan beginning on May 16, 2014 in Washington, DC. Visit www.patriotsforamerica.ning.com for more details and learn how you can help make it happen.

The Reinforcement for the Modern Alamo added on Monday, January 6, 2014

3 Responses to "The Reinforcement for the Modern Alamo"