“SOMETHING HUGE IS GOING TO COME FORTH” 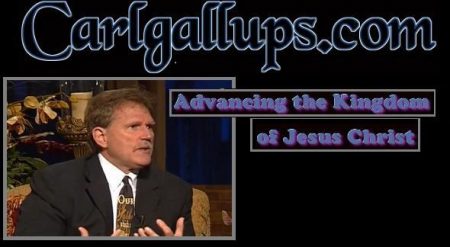 (Nov. 9, 2013) — On his November 8 episode of his “Freedom Friday” radio show, Carl Gallups said that the investigation launched more than two years ago into the authenticity of the birth certificate image posted on the White House website has become “deeper and darker” and resulted in “hard evidence” showing that Barack Hussein Obama “is a fraud.”

Gallups has been close to the investigation but is not an official spokesperson for the Maricopa County, AZ Cold Case Posse, the organization tasked with conducting it.  However, he said that he is “in contact” with lead investigator Mike Zullo “almost daily.”

The image was uploaded to the White House website on April 27, 2011 and said to be a certified copy of Obama’s long-form birth certificate from the Hawaii Department of Health.  After its release, Obama spoke briefly to say that he hoped the controversy would no longer serve as a “distraction” over other, more important matters.

Obama claims a birth in Hawaii and a father who was a citizen of Kenya, raising questions as to whether or not he is a “natural born Citizen,” as required by Article II, Section 1, clause 5 of the U.S. Constitution for the presidency.

Within 24 hours, however, the image was declared a forgery by graphics and computer experts.  Some publicly staked their reputation on the image’s fabrication.  After six months of examination, the Cold Case Posse reached the same conclusion and made its findings public on March 1, 2012 at a formal press conference. A second press conference with more details about how its conclusions were reached followed on July 17, 2012.

The mainstream press refused to investigate the findings, but the posse’s probe has continued.  Both the birth certificate and Obama’s Selective Service registration form have been declared “computer-generated forgeries,” with Zullo and Maricopa County Sheriff Joe Arpaio pushing for a congressional investigation.

Gallups said that the investigation has taken a new turn and yielded “a handful of unbelievably monumental things” which he cannot divulge at this time.  “This is why Mike Zullo has made no public comments,” Gallups said.  “It’s just simply too big to let out.”

Since 2007, Obama sycophants known as “Obots” have derided anyone questioning the veracity of Obama’s life story and authenticity of both the short-form and long-form birth certificates bearing his name.  Intimidation, death threats, website hacking, and telephone harassment have been visited upon anyone who persisted in investigating.

“This goes back five years…Hillary Clinton was the first ‘birther,'” Gallups said, referring to the 2008 presidential primaries, during which some people recall Clinton claiming that Obama was not eligible to run for president.

The Article II “natural born” provision is believed to have been added for the presidency to preclude anyone with foreign allegiances from occupying the highest office in the land.

Obama has been named as a criminal accomplice by officials in Egypt, who have filed a complaint at the International Criminal Court in The Hague.  The Egyptians claim that along with deposed Egyptian president Mohamed Morsi, Obama assisted members of The Muslim Brotherhood in committing atrocities against Coptic Christians.

Morsi was deposed on July 3 by a popular uprising and is awaiting trial by the provisional government on charges similar to that which are claimed to the ICC.  On November 3, putative Secretary of State John Kerry flew to Egypt in “secrecy” purportedly to reaffirm the “importance” of the nation’s political stability to the United States.

Kerry reportedly “called on Egyptian authorities to follow fair judicial practices” and did not remain in Egypt long.  On November 4, Morsi’s trial began but was postponed until January 8.

Several reports from Middle Eastern experts say that Morsi sent fighters to Benghazi, Libya on September 11, 2012, when four Americans were killed in a terrorist attack at a U.S. compound.  The Obama regime has not explained why military responders were not immediately sent to Benghazi, and contradictory reports have come from commanders in the region about the lack of response and reported “stand-down” order.

Gallups called the birth certificate “a smokescreen” which had led to more and more discoveries, perhaps about Obama’s past, his connections and associations, and the possible conspiracy which might have taken place to put Obama in the White House.

At the March 1, 2012 press conference, Zullo said that the posse had discovered from which computer the image had been uploaded to the White House server, but the actual person who created the forgery was not identified.

On October 18, document analyst Douglas Vogt filed two affidavits, one of which is sealed, asking the federal judge at the U.S. District Court for the Western District of Washington to convene a special grand jury to examine evidence he presented of fraud, forgery, conspiracy and other crimes involving Obama and his supporters.

Former attorney Montgomery Blair Sibley, who assisted Vogt in preparing the filings, stated on Friday that “if you could read the sealed affidavit, you would know who the forger was and see the direct line to Obama and his April 27, 2011 Press Conference…”

Vogt has referred to the forger as a female.

Former elite Secret Service agent Dan Bongino said on Fox News that although Secret Service agents do not normally “speak out,” Obama “has deceived America” and “used government against the American people,” which Bongino said is “unprecedented.”  He called Obama’s image that of “a messianic figure” because of the insulation he maintains around him.  “The government’s become a cesspool of cronies and insiders and acolytes…” Bongino said.

Bongino served both President George W. Bush and Obama.  “We are in a near-lawless administration now,” Bongino said.  Bongino ran unsuccessfully for the U.S. Senate in 2012 for Maryland and is now a candidate for Congress for Maryland’s sixth congressional district.

For months, Gallups has referred to the birth certificate investigation as “the Obama fraud case.”

3 Responses to "Carl Gallups: “This Man’s a Fraud”"