Do Religion and Politics Mix?

“IF THE RIGHTEOUS DO NOT STAND, THEY ARE ACCOMPLICES” 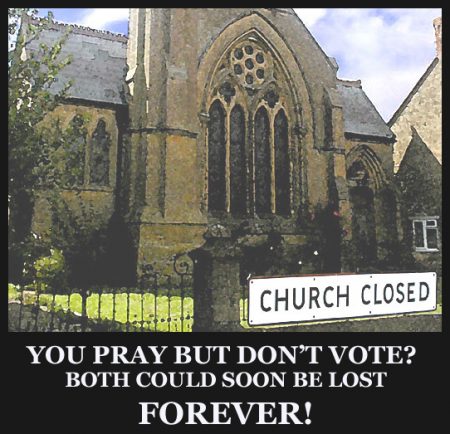 It is estimated that only 25% of Christians vote.  Therefore, if this country is seeing the decline of the nation that was based on Christian principles, the blame for that decline rests solely on the shoulders of the 75% of Christians that do not vote their values. Some of the 75% may be apathetic but most subscribe to the notion that religion (a system of faith) and politics don’t mix.  Therefore, they contend that Christians shouldn’t be involved in politics.

Since all of the instances above are political in nature, if you answered “no” to any of the questions above, then you will either have to re-evaluate your position or accept the label of hypocrite. It is the burden of the Christian, the Jew, or any person of faith to vote for those whom represent their values. When they fail to do so in a country such as the United States, then the results are simple.  Their values are not represented in government. If they value life, if they value liberty, if they value the right to work for the things they desire, all these things are in jeopardy when they do not vote.

Edmund Burke once said:
“The only thing necessary for the triumph of evil is for good men to do nothing.”

These wise words that once served as a dire warning have now become an acute observation. Evil in many forms has triumphed in America and the blame does not reside with the Socialist/Communist/Marxist/Nazis that have infiltrated our government.  The blame lies with those who have plunged their heads into the sand while the foundations of America were being systematically dismantled. They may have convinced themselves that their faith has nothing to do with politics, but they have sadly deluded themselves and have allowed the voice of God to be muffled and the Spirit of God to be quenched.

True faith must permeate every aspect of our lives or it is not faith but a nice fairy tale that resides solely within the walls of our churches. They have bought one of the three greatest lies of the devil: that people of faith should not be involved in politics. (Note: the other two: you can be like God, and everything evolved through natural processes.)

Thank God, literally, that people like Moses, and Daniel, and Joshua, and Samson, Shadrach, Meshach Abednego, and Elijah, and Queen Esther, and the Apostle Peter, and many others knew better. If they didn’t, faith in God of the Bible would never have survived the Garden of Eden. Men would have always done what was right in their own eyes, and death of the human race by the inhumanity of man against man would have annihilated all of us by now.

If religion and politics don’t mix, it’s only because the politics of mankind continually tries to assert itself over the principles and precepts of God.  Will we stand for God and His principles or will we cowardly yield to the will of man? 75% of the Christians in America represent a number large enough to rein in the ungodly: to end abortion, to preserve traditional marriage, to end the ungodly indoctrination of our children.

As we see the very foundations of the American Dream crumble, Psalm 1:3 reverberates in my mind:

“If the foundations are destroyed, what can the righteous do?”

If the righteous do not stand, they are not righteous – they are accomplices. So the final question is: will the 75% who consider themselves to be righteous wake up before it’s too late or will we one day be telling our grandchildren what it was like to live in a land where life was valued, liberty thrived, and you were free and able to pursue your dreams? May God have mercy on America and may His children awaken out of their stupor before it’s too late.

Do Religion and Politics Mix? added on Thursday, October 31, 2013

One Response to "Do Religion and Politics Mix?"