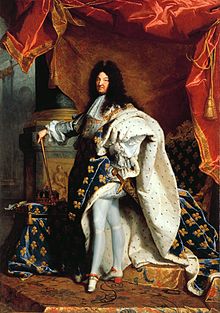 (Sep. 23, 2013) — The phrase “L’État, c’est moi” (French for “I am the state”) is traditionally attributed to King Louis XIV of France (1643 – 1715). He ruled that nation as its monarch for over 72 years in what some historians have characterized as an “authoritarian, one-dimensional autocratic tyranny.”  These historians also argue that his “… considerable foreign, military, and domestic expenditure[s] impoverished and bankrupted France” and laid the foundations for the chaotic and bloody French Revolution of 1789… the same year the U.S. constitution was finally ratified and went into effect.

Mercifully, Louis XIV is long gone.  But the vanity and hubris imbedded in the phrase attributed to him continues to this day and presently enjoys its most purely refined form within the walls of 1600 Pennsylvania Avenue, Washington, D.C.  The most recent confirmation of the autocratic “I-am-the-state” and “my-way-or-the-highway” approach to addressing the woes of the nation coming from that residence is the threat of a veto by the current occupant of any piece of legislation proposing to raise the debt limit and avert a government shutdown and debt default… if it defunds obamacare.

Translation: unless the bill contains funding authority to implement the widely detested, job-killing, not-ready-for-prime-time stupidity of the woefully mislabeled “affordable care act,” Monsieur “l’état, c’est moi” is prepared to himself shut down the government, set the stage for debt default and plunge the nation again into a recession that will make the Great Depression of 1929-1935 seem like a cake-walk.

Make no mistake, the bill prepared by the Republicans will – lamentably, but necessarily – authorize a raising of the debt limit to allow the government to continue borrowing and thus, continue functioning.  It will not… repeat, not, result in a government “shutdown” but will instead assure a continued “functioning” of the government, save for the denial of funding for a single, particularly stupid and unctuous component of that operation.

The Republican bill would thus preserve 99+% of the funding for government operations…. including obamaphones.  Ah, but unless his royal highness gets 100.00% of what he wants – and not a sou less, including funding for stupidity – he will take his bat and ball and go home and throw the nation into default. Ah, statesmanship….

Memo to the electorate: if the government shuts down, it will not be because of the Republicans.  Instead, it will come because of the intransigence, vanity and hubris of the guy with access to the launch codes.

The parallels between the regime which Monsieur obama has constructed around him – utilizing to the fullest his sycophants and Chicagoland political schemes and tactics, including never letting a crisis go to waste – and the regimes of Eighteenth Century monarchs and kings like Louis XIV are stunning… and disturbing.

Like a king, the clown at 1600 travels here and there over his realm (as well as around the globe) in a jet that costs the peasants below some $180,000.00 per hour to fly; his queen jets off on separate vacations to stay at spas costing $5,000.00 per night; he hands out multi-billion-dollar favors to the favored (Solyndra, GM, GE, AFL/CIO, CBS, NBC, MSNBC) while releasing his hounds (IRS, EPA, DHS) to harass and intimidate the disfavored.

One is reminded of a famous line from another historical document detailing the complaints being lodged as a precursor to and justification for action: “He has erected a Multitude of new Offices, and sent hither Swarms of Officers to harrass our People, and eat out their Substance.” The document?  Hint: it begins with the words: “When in the course of human events….”

Eighteenth-Century kings and queens would be royally envious of how sharply honed the fine art of abuse of power has become in this nation since January 2009.

And yet, the clown and his operatives know nothing of “Fast and Furious,” NSA surveillance of Americans or reporters, especially at Fox News or, perhaps worst of all, “The Benghazi Atrocity.”  But they assure us they are looking into it to make sure it never happens again…, because, I mean, “… at this point in time, what difference does it make?”

The Benghazi atrocity lies not in the fact that four Americans were allowed to die while their pleas – before as well as during the attack – went unanswered. Rather, the atrocity lies in the fact that, with a somnambulant mainstream media more concerned with meaningless bans on high capacity gun magazines and a Supreme Court that seems more obsessed with preserving its “stature” and “legacy” than defending the Constitution, the regime might well get away with it.

And so what, you may ask, is the point of this post?  Glad you’ve asked.  As many may know, the vast bulk of the posts I have penned for The P&E over the past few years have focused on the issue of presidential eligibility under Art. 2, Sec. 1, Cl. 5 of the Constitution.  That provision, of course, unequivocally restricts the presidency to individuals who are “natural born citizens.”

Readers are also aware that the Congressional Research Service (“CRS”) – through one Jack Maskell, a lawyer there – has issued several documents since 2009 peddling the theory that, if a person is merely born here, regardless of the citizenship status of the person’s parents, that person is eligible under the Constitution as a “natural born citizen.”

These documents uniformly reject the argument that, in order to be a “natural born citizen,” one’s parents must be at the time of birth U.S. citizens, and despite the specific statement to this effect in the U.S. Supreme Court decision in Minor v. Happersett, 88 U.S. 162, 167-168 (1875).  In essence, the CRS documents posit that there is no constitutional distinction between a “native born citizen” and a “natural born citizen,” deeming them both to be eligible to the presidency.

The error of that mindset is discussed here and here. In fact, the growing mountain of evidence – much like a rising volcano before eruption – supports the likelihood that the current resident at 1600 Pennsylvania Avenue is plainly ineligible to hold the office of president and is thus a common usurper.

The point of the present post, however, lies in the irony that one of the main arguments offered up by Mr. Maskell in both of the CRS documents which he authored in 2009 and 2011 for why the Founders inserted the “natural born citizen” clause into the Constitution was to guard against “… wealthy European aristocracy or royalty coming to America, gaining citizenship, and then buying and scheming their way to the presidency without long-standing loyalty to the nation.”  See CRS Report Nov. 14, 2011 at i, “Summary.”

With Monsieur “L’État, c’est moi” currently occupying the White House – jetting wherever he wants whenever he wants; bowing to foreign leaders; bungling foreign affairs to the delight of our enemies and dismay of our allies; dining on truffles and lobster thermador while his serfs try to find affordable hot dogs – pray tell, how are we now better off than if we were under the thumb of Louis XIV?

And if Mr. Maskell were correct in his channeling of what he claims the Founders intended – birth alone here is sufficient to be a “natural born citizen,” regardless of parental citizenship – what went wrong?  For someone who is purportedly such an indisputably great “natural born citizen,” the clown is putting on a stellar imitation of that which Mr. Maskell assures us was what the Founders most certainly did not want as a president.

In short, we now have a de facto monarchy headed by a de facto king seemingly intent on getting his way on whatever he wants, whenever he wants it, whatever the cost to the taxpayer, the nation or future generations, and the public in the meantime be damned. Or, as his wife the queen might say, “Let them eat cake!”

No… wait… cake is fattening. She wouldn’t say that. How about: “Let them eat hummus!”