We started doing a daily Bible study with him – 10-minute studies designed for family gatherings with the children – and sometimes we would do 3 at one sitting, right after the evening meal. He would read the Bible passages and then we would discuss them, relating them to the joys and tribulations of his daily life.

Being an avid and active Constitutionalist, I created a short study entitled ‘The Declaration of Independence and the Bible’ that I inserted into the regular study:

The DECLARATION OF INDEPENDENCE
and the BIBLE

Today we look at the preamble to the Constitution for the United States of America, The DECLARATION OF INDEPENDENCE, to see what it has in common with the BIBLE.

Read ‘The Declaration of Independence’ (pages 35-39 of your Pocket Constitution).

How many times are the words ‘God’, the ‘Creator’, ‘Nature’s God’, and the ‘Laws of Nature’ mentioned in the Declaration (highlight in yellow, then count them)?

What do you think ‘unalienable Rights’ are? (HINT: dissect the word and analyze). What is the significance of the word ‘Rights’ being capitalized?

How many people from how many ‘Colonies’ signed the Declaration of Independence?  What were the names of the original ‘Colonies’, and what were they called once the Constitution was implemented?

Based on this study, would you conclude that we are a ‘Christian’ Nation, or something else?

Thank God for the bravery and the intelligence and spirituality of those who brought forth this new Nation, under God, with Liberty and Justice for All.

Following this, our discussion soon turned to the reading of Article II, Section 1, Clause 5 of the U.S. Constitution, which states that: “No Person except a natural born Citizen, … shall be eligible to the Office of President;”

After a short but succinct discussion wherein our beginning 5th grader was informed that his biblically-founded Constitution had been severely compromised by blatantly allowing the treasonous usurpation of that Office by an illegal-alien Marxist Muslim using amateurishly forged Certificate of Birth and Selective Service Registration documents for identification, our beginning 5th grader was quick to say, “That’s crazy!”

Then when he learned that all 535 members of Congress were also aware that Mr. Obama/Soetoro/What’sHisName was using a self-published SS# 042-68-4425 that failed the government’s own E-Verify program that barred him from employment the U.S., our beginning 5th grader then said, “That’s insane!”

We then discussed pastor Dietrich Bonhoeffer’s well-known statement that “Silence in the face of evil is itself evil: God will not hold us guiltless. Not to speak is to speak. Not to act is to act.” … and how it applied to the deafening silence and inexplicable inactions by our elected officials, leaving our beginning 5th grader almost speechless, except to say, “That’s Treason!”

By the third week of his visit, our beginning 5th grader had taken a considerable interest in his ‘Rights’ supposedly guaranteed by the Constitution, and in exposing to the public the obvious crimes of Obama (Mispersonization of Identity, Forgery, & Treason). When he learned that I was planning to participate in a 2-hour IMPEACH OBAMA Overpasses* demo on the 4th of July – on a freeway overpass bridge nearby to where he was born almost 11 years ago – he said, “I’m going!”

Our enthusiastic young patriot convinced me that he should be allowed to attend, and that he wanted to pass out pocket-sized copies of the Constitution and Declaration of Independence that he learned so much about in his bible studies.  He went into action at the demo wearing his IMPEACH OBAMA button: 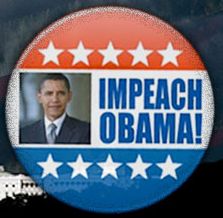 … and carrying a flag mounted on my new STANDARD for the U.S. Constitution: 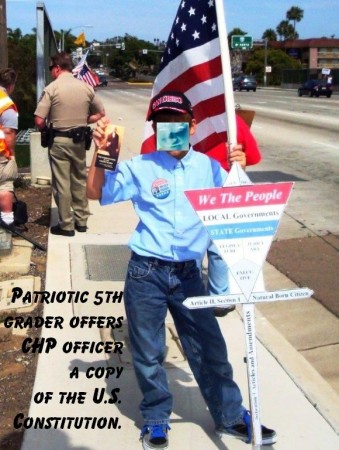 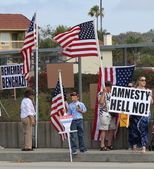 During the demo, a California Highway Patrol officer (CHP) approached the group, ordering us to take down the signs (we didn’t) and saying that ‘the California Constitution doesn’t apply here.”  At this point, our young patriot proffered one of his pocket Constitutions asking “Would you like a copy of the U.S. Constitution, Officer?” When he received a curt reply of an emphatic ‘No!”, not even a “No, thank you,” he moved on to find some other passersby or passing motorists he could explain the ‘Standard’ to and offer them a copy of our Constitution. Some gratefully accepted, and he even smilingly offered one to a cowardly drive-by Obot who called his grandpa ‘an ****ing Republican A**H***!’

All in all, it was a successful day, full of patriotism, surprises, fireworks, and learning experiences.

So the next time you are talking or corresponding with any one of the 535 members of Congress masquerading as a duly-sworn ‘public servant’, you might remind them that their ‘dumber-than-a-5th-grader behavior’ evokes this kind of response from a beginning 5th grader:

… and tell them to “Get a spine” or “Get the he** out” or “Get an orange jumpsuit” for their upcoming trip to prison.

P.S. Here’s a timely and succinct statement that I print out (I get 4 per page) and stuff one in every postage-prepaid solicitation envelope I receive:

It is an act of TREASON for an unknown entity to usurp the Office of President of the United States using proven-to-be forged ID’s (Certificate of Birth & Selective Service Registration) and a self-published SS# 042-68-4425 that fails the government’s own E-Verify and SS# Verification systems to qualify for employment in the United States.

Paying homage to and legitimization of that unknown and undocumented entity who uses forged and stolen identification documents, by calling him ‘The President’, is to be knowingly complicit in that act of TREASON!

Therefore anyone who calls that undocumented entity ‘President’ becomes him or herself a Treasonous Co-Conspirator! (www.TinyURL.com/TreasonousCo-Conspirators).

Dumber Than a Fifth-Grader added on Saturday, August 17, 2013