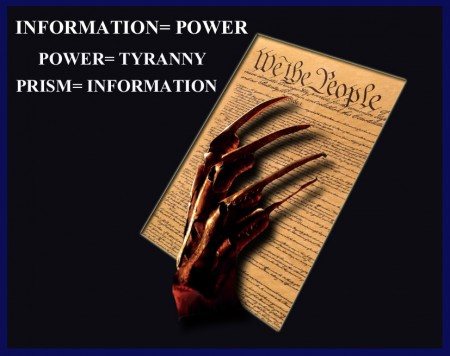 (Jun. 20, 2013) — During these past few weeks of scandal after scandal, it seems a new debate has manifested as both left and right try to either play down or aggrandize which turpitude rates to what level.  For those who read TPATH and other blogs or news sites, there is no need to go over the entire list.  Suffice it to say, it is extensive.   Without a shred of doubt, this usurper in the White House has proven to be worse than we could have imagined more than five years ago when we first rang the warning bells.

A very frightening realization has reared its hideous head.  It is more than possible and actually quite probable that all the scandals, all the trouble from Benghazi, Fast and Furious, the IRS, the AP, Supreme Court rulings and so many more critical issues that are destroying our country and its culture have all spawned from one malicious transgressive program under the control of one malicious transgressive man.

And that program is?  The massive database and data collection system known as PRISM.  Many people may think this data-mining by our government is essential for the security and safety of our country and would only be dangerous if it fell into the wrong hands.  In case you missed it, it has.

Obama has used this program for evil.  And not to stop the evil, murderous madness of the Muslims, but he has used it as a tool to control his friends and extort his political enemies.

Every American and every aspect of his civil rights are not just in peril of being subverted, they have been.   This data-gathering monstrosity is so extensive, so encompassing and so invasive, no citizen, no politician, no Military leader and no judge or justice has been immune from it.

Every person who has ever lived has something in his past he is not proud of.  Perhaps he made some mistake or some unfortunate decision.  There may be information on him that could destroy a long and hard-earned reputation or ruin a relationship or even a marriage or have had cause and effect on his profession, business or political career.

Before going any further, it might be a good idea to explain, for those who may not fully understand, the power and the capability this PRISM system has and just how dangerous it is to have it under the control of this man.

For years now this system has been gathering data from every aspect of human communication.  Every aspect.  It began under Clinton where it was called Echelon and continued with Bush as part of the Patriot Act.  As the names changed, the gathering capability and the data storing and organizing structure grew to proportions unimaginable just 10 years ago.

Data, your personal information, is gathered and stored in an almost random fashion and is much too extensive for any one person or even large groups to review.  That’s why they deceptively tell you they aren’t reading your emails or listening to your calls.  But this is the insidious part.  These databases are built and then linked to allow for “queries” based on algorithms or strings of information or requests.  This powerful network of mainframe computers can almost instantly search, compile and then create additional queries with just a few keystrokes.

Suppose there was a Supreme Court Justice who was about to rule on, oh, let’s say a massively intrusive and unconstitutional health care bill.

Or may we imagine a high-ranking general was about to dispute an official administration lie?

Or maybe a Republican Senator is needed to support an illegal immigration amnesty bill.

Or a government employee in Hawaii may be needed to obscure, then verify, a birth certificate.

Or a Social Security honcho might be needed to close the e-verify system to certain searches.

Or perhaps a University Dean may be required to provide a record showing a certain truant student graduated.
Or there may be a need to contact someone who could see to it that a particular passport disappears.

Or perhaps a judge in an eligibility lawsuit may need to be reminded of a few personal deficiencies.

Or another or maybe the same Senator just might be needed to support arming terrorists in Syria.

Or the same or another Supreme Court justice might need to be persuaded that voter ID laws are a bad thing.

As you can see, the queries are endless and the output can be amazing and informative.  And then, miraculously, every desire of this administration is met, without a peep.  And this, with just a few keystrokes entered into a harmless little database that no one reads.  How nice.

As for the many who over and over again have asked, “How does this guy get away with this stuff?”

The answer is PRISM.

One of the many and oh-so-numerous fears for many conservatives concerning the fraudulent re-election of this Marxist was the dread of a conservative on the Supreme Court being replaced by yet another liberal.  This of course would be disastrous.

But Obama was not concerned.  He didn’t need a retirement to impose his leftist agenda.  He has PRISM.

There was a rally in Washington, DC June 19th; no doubt the main issue that was “Audit the IRS” is an important one.   TPATH thinks the slogan and demand should be to defund the IRS and fire every last one of them.

But the most important issue now, one that will continue to allow tyrannical governments to dominate the people, is this database and gathering system.

PRISM: Its Grimy Claws are Everywhere added on Thursday, June 20, 2013

2 Responses to "PRISM: Its Grimy Claws are Everywhere"