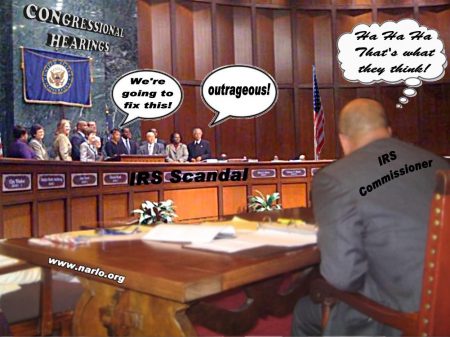 The temptation for presidents, senators, congressman and other federal agencies to use the IRS as a political tool to “get” a person or a group of persons, or snoop into their lives and financial or political dealings, is hardly a new phenomenon.  In a “Time – Swampland” May 14, 2013 news article entitled, “IRS Scandal Echoes A Long History of Political Harassment“, the author wrote this:

“John F. Kennedy sanctioned an ‘Ideological Organizations Project’ at the IRS that investigated right-wing groups. President Richard Nixon encouraged a secret IRS program called the ‘Special Services Staff’ to investigate his political opponents and harass them with audits.  And presidents weren’t the only offenders; the FBI has long used the IRS to harass political opponents.  A 1964 FBI plan to “discredit” the United Klans of America called for illegally disclosing tax information about key members.  Around the same time, the FBI initiated an IRS audit of Dr. Martin Luther King Jr. and his non-profit organization, the Southern Christian Leadership Conference.  One memo even suggested the bureau forge letters from King to donors of the group that warned of the ongoing IRS investigations, in the hopes of cutting off the group’s cash flow.”

And it is not just the IRS that is used for political purposes by those in power.  Federal bureaucracies, under the control of the Executive Branch, are also used to further specific agendas or advance political ideologies.  The Environmental Protection Agency (EPA) and the Department of Energy (DOE) are used to implement radical environmental international policy without regard to constitutional protections or property rights, much less any cost benefits.   The Department of Education is used to insert collectivist, multi-cultural, socialist, environmental and one-world-government propaganda into our public education system.  The Department of Justice has been used to “spy” on not just journalists, but millions of civilian Americans as well, in violation of constitutional liberties.  Homeland Security unilaterally makes up its own rules on border security and immigration policy that are in direct conflict with immigration law, usually at the direction of the President.  The one common thread amongst them ….. is that they all lie or take the Fifth.

But what is even worse, these federal bureaucracies have minds and lives of their own.  They contain an elite culture of men and women who have been instilled with a liberal ideology that is deeply embedded in the body politic and they care not who is president or who runs Congress.  Presidents and Congresses come and go, but the bureaucracy lives on.  Presidents and Congress could rein these bureaucracies in, but they are wont to do so.  After all, it can serve a President or Congress to have these stalwart bureaucratic warriors on the front lines with the people, taking the heat, as the IRS is taking the heat now.  Except for Nixon, all other presidents have been essentially insulated from their actions to manipulate the bureaucracy for their own ends because they either leave no trail or their minions cover for them, as Obama’s minions are covering for him right now.

This whole IRS scandal is a joke.  They got caught with their hands in the cookie jar and now they promise to clean it up.  If you think that IRS abuse of power or its lack of neutrality is somehow going to evaporate because of the current scandal, you are living in a fantasyland.  Some changes will be made and some people will be shuffled around to pander to the masses.  A few sacrificial lambs might even be fired.  However, any substantive changes will be hollow at best.  The unfortunate reality is that none of it will change the culture of the IRS or any of the other giant bureaucracies that exist in the federal government, much less state and local government.  Once the “heat” is off the IRS, they will go back to doing what they have been doing for years, being the aggressive money collector for the Federal Reserve and the enforcement arm and snitch for the party in power, but mostly the Democrat Party.

All of this apparent outrage coming out of the President and Congress right now is feigned outrage at best.  The congressional investigations may lead somewhere, but the real problem of the pervasive and permissive liberal culture that exists in the IRS and other federal bureaucracies will go unnoticed, much less fixed.  This liberal culture has become institutionalized.

Ladies and gentlemen, we cannot understand how the IRS would target conservative groups unless we understand American bureaucracies and their history.

Article I, Section 1 of the U.S. Constitution says that: “All legislative Powers herein granted shall be vested in a Congress of the United States, which shall consist of a Senate and House of Representatives.”

This means, without equivocation, that all law-making authority comes from the Congress, since “legislative powers” means the power to make law.

As America grew in size and population, the Congress could no longer handle the day-to-day requirements of governing and lawmaking, largely because they kept making unsustainable promises to the people.  Consequently, they started passing on some of their lawmaking authority to agencies that were run by bureaucrats.  Bureaucracies were given the power to promulgate rules and these rules have the same force as legislative laws, accompanied by fines, penalties and even jail time if the rules are violated.

Consequently, any rules that are promulgated by the bureaucracies and come before the legislative bodies for adoption or adopted within the bureaucracy will always have a liberal bias in them.  This results in an institutionalized liberal bias in all rulemaking by bureaucracies and forces the people to live under liberal policies, where conservative principles receive little notice.  Liberals have essentially become a “Force Majeure” (superior force) throughout all levels of our government.  Consequently, any threat to that “Force Majeure” can be and is challenged by the bureaucracy, thus resulting in targeting Conservative groups by the IRS for additional scrutiny.  This isn’t just some right-wing political rhetoric.  This is fact.

From this we have very powerful bureaucracies such as the Department of Justice, the Environmental Protection Agency, the Department of Education, the Department of Energy, the Department of Agriculture and many more, each implementing and enforcing the liberal agenda. They adopt rules without legislative authority and without a constitutional test, in direct violation of Article I, Section 1 of the U.S. Constitution.  Only actions by a legislature or a court can undo bureaucratic rules, but unfortunately constitutional challenges are rare.  Even when constitutional challenges are mounted, a liberal judiciary rules in favor of the liberal law or rule.  Need we mention Obamacare and Chief Justice Roberts who sided with the liberals on the high court to rule that Obamacare was constitutional when it clearly wasn’t?  The decision by the high court so badly stretched the Commerce, Taxing and Necessary and Proper Clauses, it literally ripped the Constitution to shreds.  Chief Justice Marshall must have rolled over in his grave several times when that decree came down.

If Americans do not start rolling back the power of the predominantly liberal bureaucracies, America will morph into a country where every man, woman and child is a law-breaker and where a police state will rise to enforce all of the rules passed by legislatures and the bureaucracies. We’re almost at that stage now and there are incidents of the growing police state everywhere you look.

Political corruption in pursuit of power is the scourge of all governments, including Democracies and Constitutional Republics, and it brings to mind a saying that applies to all small and large agreements entered into between humans …. “A contract (insert Constitution) only has value and is enforceable if there is the utmost good faith and honor between the parties.”  In the same vain, “….. a locked door only keeps honest people out.”  All of the solemn oaths uttered by American politicians and bureaucrats who swear to preserve, protect and defend the Constitution of the United States so help them God, mean absolutely nothing if the politician or bureaucrat is devoid of honor.  Political ambition for power’s sake very seldom, if ever, is accompanied by honor.  It more than likely comes with corruption and abuse of power.

The people cannot absolve themselves of responsibility when their government goes sour.  Only the people can demand that government act with honor and unflinchingly comply with the agreements between the government and the people.  But that only works when the people also have honor.  IRS and other government scandals become the norm when the people and those in government do not have the sacred trappings of honor, integrity and honesty woven into their souls.  Corruption, crony capitalism, nepotism and abuse of power will rule, as in any kingdom or dictatorship.  When the corruption is occasionally exposed, the leaders will feign outrage as they are today over the IRS scandal, take meaningless legislative or punitive actions and then move on.  In the end, nothing will change, evil reigns supreme and individual freedom becomes a mirage on the distant horizon.

Ron Ewart, a nationally known author and speaker on freedom and property issues and author of his weekly column, “In Defense of Rural America“, is the President of the National Association of Rural Landowners, (NARLO) (http://www.narlo.org) a non-profit corporation headquartered in Washington State and dedicated to restoring, maintaining and defending property rights for urban and rural landowners.  Mr. Ewart can be reached for comment at ron@www.narlo.org or by phone at 1-800 682-7848.