(Apr. 19, 2013) — Two men described as suspects on Thursday night in the Boston Marathon explosions carried out a robbery and engaged police officers at Massachusetts Institute of Technology (MIT) have been described as “terrorists” “who came here to kill.”  One is now dead and the other frantically being sought by Watertown, MA authorities.

In the early hours of Friday, a shootout occurred with the two suspects on the campus of MIT which took the life of a police officer and one suspect. Explosions and gunshots were heard by residents.  A robbery and a carjacking then took place, with the owner of the car somehow escaping harm.

A second MIT police officer is hospitalized in critical condition as a result of the shootout.

The robbery occurred at about 10:30 p.m. on Thursday night.

The second suspect is considered “armed and dangerous” and is still on the loose, believed to be in the Watertown, MA area.

Various reports state that undetonated explosives were scattered on the streets in Watertown by the suspects.

Classes at MIT and Harvard are canceled today.  Gov. Deval Patrick ordered all mass transit systems to cease operation and advised residents of the area to stay indoors.

The suspect who is still at large is pictured as the man wearing a backwards white baseball cap in FBI surveillance video of the Boston Marathon.

An former FBI profiler appearing on Fox News’ Fox & Friends stated that the two terrorists appear to have known the Watertown area well and that the terror plots might have been limited to “the two of them.”

At 6:45 a.m., Fox & Friends is reporting that two young men are handcuffed and sitting on the curb of a street in Boston. 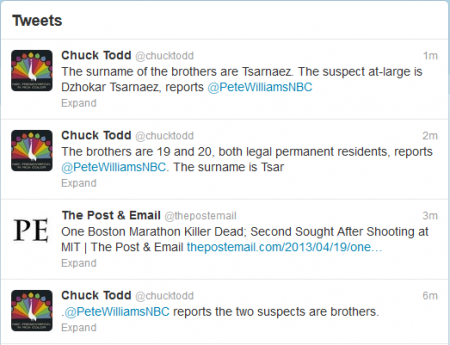 Update, 6:53 a.m. EDT:  The two suspects are reported to be brothers who have been in the United States for at least a year.  The last name is Chechen. Jennifer Griffin of Fox News has reported that Chechnya is a Muslim country.

6:58 a.m.:  A bomb squad tactician in Boston described as an “EOD” specialist handled what could have been “a suspicious package.”  The reporter on the scene was asked to move away from the area.

7:13 a.m.:  Armored Humvees have lined Auburn Street in Watertown along with multiple police officers in a 20-block area.  Mike Tobin of Fox News reported at 7:15 that a section of Norfolk Street in Cambridge has been closed down.  He described the area as “very dangerous.”

The terrorist still sought reportedly won a $2,500 scholarship to attend a college in the Boston area.  Griffin reported that Dzhokhar A. Tsarnaev might have “grown up” in Boston although it is believed that he obtained military training “overseas.”

Tsarnaev was “honored” as a town of Cambridge scholarship recipient in 2011 at Cambridge City Hall for high school students “pursuing higher education.”

7:31 a.m.:  Bill Hemmer of Fox News reported that the two brothers had been in the U.S. for “several years” as “legal permanent residents.”

7:34 a.m.:  Walid Phares said that the terrorism carried out by the brothers has moved to “an international level.”  He said they could be part of a terrorist cell and described them as “urban fighters.”  “We’re talking about a fighting unit,” he said. He hypothesized that they are “part of a network” and received training overseas.  Phares said that “jihadi Chechens train in Afghanistan” and that the brothers might have “tactical support within the United States.”

Phares reported that jihadists could come from any country.

Boston police have tweeted that a “door-to-door” search is occurring in Watertown as of 7:39 a.m. EDT.  The search for the suspect is considered “a manhunt.”

One Response to "One Boston Marathon Killer Dead; Second Sought After Shooting at MIT"