STOP THE INDOCTRINATION OF YOUR CHILDREN AND GRANDCHILDREN! 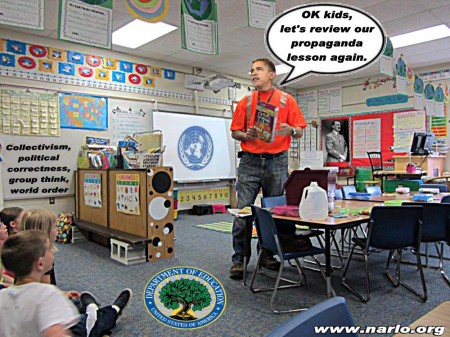 “By the skillful and sustained use of propaganda, one can make a people see even heaven as hell, or an extremely wretched life as paradise.” — Adolf Hitler

“All propaganda has to be popular and has to accommodate itself to the comprehension of the least intelligent of those whom it seeks to reach.” — Adolf Hitler

“It is no secret that government schools across the United States have become indoctrination centers for the spreading of a social gospel that is anathema to the values of the majority of American parents.  Public education is largely run by union bosses and liberal school boards protecting incompetent educrats who push an agenda that has nothing to do with teaching children HOW to think and everything to do with teaching them WHAT to think!  Hitler, Stalin and Mao would be proud.”  — Doug Patton

Carter, the so-called “worst president ever” (that is, until Obama), gave us the U.S. Department of Education, along with a willing Congress.  The Department of Education Organization Act (Public Law 96-88) was signed into law by President Carter on October 17, 1979 and began “business” on May 4, 1980.  Thus ended local education in America.  In 2011 the U.S. Department of Education’s (DoEd) budget was just shy of $70 billion and as near as we can tell from the conflicting information, DoEd has at least 17,000 employees.  DoEd has its fingers in every facet of public education from student loans, to controlling curriculum, to writing and printing school textbooks.

The CATO Institute has set up an excellent timeline  (1787 – 2009) of the federal government’s efforts to manage (or mismanage, as the case may be) American education.  It is a litany of failed attempts and perpetual missteps.  Here is just one entry in the list we found disturbing, but it is symptomatic of all government programs.

1994: “The Department of Education admits that it is losing between $3 billion and $4 billion annually to waste, fraud, and loan defaults in its college aid programs.  Education Secretary Richard Riley calls the department’s financial management ‘worse than lax.’  One problem is that the department wires billions of dollars each year to obscure trade schools based on undocumented claims about how many students are enrolled on federal scholarships.”

In an article from November 2010 entitled “The Government-Triggered Subprime Meltdown And Other Government Insanity!” we wrote this:

“The U.S. Department of Education (DoEd) is “buying off” the American public education system with your tax money.  Here is the DoEd’s mission statement:‘ DoEd’s mission is to promote student achievement and preparation for global competitiveness by fostering educational excellence and ensuring equal access.  DoEd’s is dedicated to:

• Establishing policies on federal financial aid for education, and distributing as well as monitoring those funds.

“Au contraire!  Student achievement, educational excellence, equal access and global competitiveness, my Aunt Fanny!  Their mission is to completely take over public education in America and “shape” it into their distorted vision of equality and fairness with one goal in mind ….. to brainwash and indoctrinate our children into mindless robots that will be good, loyal and docile members of the collective and will vote for liberals of any stripe.  The Department is loaded with so-called psychological experts, educated idiots and career bureaucrats that have a lot of money to spend and by God they are going to spend it, even if no substantial benefits are realized, except a covert act of official government-sanctioned propaganda.”

“Common Core,” “Race to the Top” and “No Child Left Behind” are efforts by the elites in the federal government, education and academia to control public education and establish a national curriculum that fits their progressive agenda.

In an article in the “Education Reporter” but originally published by The Heritage Foundation in December of 2012, they wrap up their assessment of Common Core by writing this:

“An English curriculum overloaded with advocacy journalism or with ‘informational’ articles chosen for their topical and/or political nature should raise serious concerns among parents, school leaders, and policymakers.  Common Core’s standards not only present a serious threat to state and local education authority, but also put academic quality at risk.  Pushing fatally flawed education standards into America’s schools is not the way to improve education for America’s students.”

In an October 4, 2012 article by Karen Schroeder, President of “Advocates for Academic Freedom,” she writes at the Conservative Teachers of America website regarding Common Core:

“Common Core Standards are a federal program in which the federal government will define the curricula and the academic standards for each subject taught in the every school setting. These Federal Standards will basically eliminate local control of schools and provide unfettered access to curricula by the Federal Government and by the United Nations eventually.  To date, 46 states have adopted Common Core Standards.  The cost for implementing these standards may require a new method of taxation that is more accommodating for federal control of the educational system.”

“President Obama’s federal program Race to the Top provides bonus points to states that institute common learning goals.  Common Core Standards represent about $16 billion in new unfunded mandates. It imposes mediocre standards upon the states, which must be accepted or the states are threatened with loss of present funding.  Federal mandating of these standards bypasses any congressional scrutiny and the state legislative process, as well as violating the public trust by preventing any school board, parental, or teacher approval of these programs.”

Just recently, in the city of Atlanta, a massive virtually city-wide test-score cheating scandal was uncovered and 35 educators and the former superintendent of Atlanta public schools were indicted on theft, racketeering, making false statements and falsifying test scores.  Under the No Child Left Behind Act passed by Congress and signed by President Bush, there are significant bonuses paid to those districts that improve their test scores.  In the Atlanta case, it appears it was all about the money, your money.  Even the most intellectually-challenged can see that if there were no bonuses, there would be no cheating.

With “Common Core,” “Race to the Top” and the “No Child Left Behind” programs and the billions upon billions of your tax dollars allocated to them, the DoEd will have virtually taken over all education in America and instituted an international curriculum designed to indoctrinate every American child into the agenda of the one-world-order, as defined by the despots and dictators that make up the hopelessly corrupt United Nations.

These three federal programs have positive-sounding names.  How can anyone be against them?  But like what is said about so many things, the devil is in the details and parents better start addressing the details before they have children coming home from school, spouting things they don’t recognize and have never heard before which are the antithesis to American freedom and liberty.

Public education, as now administered by the U.S. Department of Education, is just one more segment of American life that the federal government has inserted itself where it has no constitutional authority, aided, abetted, endorsed and supported by the U.S. Congress and a very liberal judiciary.

What we have outlined above are just a few of the reasons why the U. S. Department of Education, euphemistically known as the Ministry of Propaganda, a la Hitler, is the domestic enemy of the free people of the United States of America and should be immediately dismantled, lock, stock and barrel.

With the nationalization of the American health care system by the federal government under Obamacare, it now controls every aspect of the lives of every American.  Over the years it has gained control over all land, water, food, money, employment, commerce, industry, education, energy and health care.   The traps were set 100 years ago, and one by one, the people have been ensnared by the trap, as each one snapped in turn, until the concept of being left alone by your government has become an oxymoron.

As we have repeated so many times in previous articles:

Take away your money and government has no power.  But alas, most Americans just don’t get it, some because they have their hand out to government for “free stuff” and others out of just plain ignorance.  But then, some of the brightest minds don’t get it, either.  We often ponder how many of our readers get it, since we hear from so few?

The enemy is government, not each other, but we are so divided we are blinded by our own divisions to the real armed and dangerous enemy of freedom ….. our own government!

If you care about the survival of a free America, please join with us at the “Parallax Prophecies Institute” to bring the citizens of this great country back to being united Americans who fearlessly turn on their enemies when threatened, foreign or domestic, instead of being divided, weak, spineless Americans who are locked in the yoke of enslavement, pulling the royal cart of government.  Join with us as free Americans peacefully against a government that has become the enemy of the people.  Remember!  If you fear government, they win and you are but a slave.

The U.S. Department of Education, Ministry of Propaganda! added on Sunday, April 7, 2013

One Response to "The U.S. Department of Education, Ministry of Propaganda!"