“BIRDS OF A FEATHER”

(Mar. 11, 2013) — In early September 2008, just after Barack Hussein Obama received the nomination from the Democrat Party for President of the United States, then-Detroit Mayor Kwame Kilpatrick pleaded guilty to two counts of obstruction of justice and was sentenced to 120 days in jail after it was found that he and an aide had an extramarital affair.

His troubles did not end there.

The fact that just the year before, Obama had lauded Kilpatrick as “a great mayor” worried some Democrats during the 2008 presidential campaign, particularly because even in union-rich Michigan, Obama and opponent John McCain were polling very closely.  Newsweek had predicted that “Even with Kwame Kilpatrick in the slammer, Barack Obama will be dogged by the scandal that brought down Detroit’s mayor. For starters, Kilpatrick won’t be around to lead the get-out-the-vote effort in dependably Democratic Detroit, which could be decisive in the toss-up state of Michigan, where Obama clings to a slim lead over John McCain.”

Just four weeks before Kilpatrick’s guilty plea to the obstruction charges, Obama had told an audience that Kilpatrick was “going to be doing astounding things for many years to come.”  “I call him a great friend and colleague,” Obama declared. “…And I’m looking forward to a lengthy collaboration in terms of making sure that Detroit does well in the future.”

The City of Detroit has become one of the most distressed in the nation as a result of high unemployment, crime, and financial crisis.  Last month, Forbes ranked Detroit the “most miserable city in America.”  In 2007, while Kilpatrick was mayor, Detroit was determined to be the “nation’s most dangerous city.”  Salon reported that Kilpatrick had used racist tactics to win his mayoral election in 2005 and that issues of race dominated Detroit politics and Kilpatrick’s eventual vacating of the mayor’s office.

Four days after Obama’s 2008 praise of Kilpatrick, RealClearPolitics reported that Kilpatrick’s popularity among voters had plunged to 2% amidst the news of the scandal surrounding his former aide.

Forced to resign, Kilpatrick was incarcerated the following month after having been convicted of rigging contracts, extortion and being a player in a “long-running criminal organization.”  He was ordered to pay $1,000,000 in restitution to the City of Detroit.

Kilpatrick was jailed again in May 2010 for 14 months for violating his parole, a federal offense.

Earlier on Monday, Kilpatrick was convicted by a jury on 24 charges involving racketeering, mail fraud, filing false tax returns, and, according to a prosecutor, a “breathtaking” degree of corruption.  He will spend at least 20 years in federal prison.

In his memoir, written during his first jail term, Kilpatrick wrote that he harbored enmity toward Obama after he won the 2008 presidential election.  According to Kilpatrick, the two men had shared “mutual respect” before Kilpatrick’s criminal convictions. 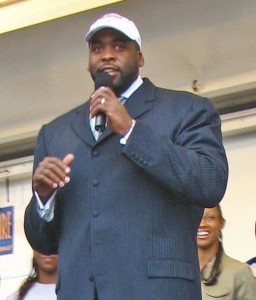 Kilpatrick’s middle name is “Malik,” which also became the middle name of Malcolm X after he visited Mecca during his Hajj in 1964.  Obama-supportive websites such as The Huffington Post and TIME appear to have taken an interest in Malcolm X of late.  A researcher claims that Malcolm X is Obama’s biological father.

Since 2008, anyone voicing concern over Obama’s socialist worldview was called “a racist.”  Malcolm X fought against what he perceived as institutionalized racism in the U.S. until his untimely death by assassination in 1965.

Obama and Kilpatrick had a mutual friend:  the Rev. Jeremiah Wright, then-pastor of the Trinity United Church of Christ of “America’s-chickens-have-come-home-to-roost” fame.  The phrase was one which Malcolm X had used after President John F. Kennedy was assassinated.

Wright had reportedly employed bodyguards from the Nation of Islam, of which Malcolm X had been a member until shortly before his assassinated, a group now led by Minister Louis Farrakhan.

Obama had reportedly first approached Wright not for spiritual reasons, but rather, “as a community organizer.” According to author Edward Klein, Wright claimed that when he had met Obama for the first time, Obama was “steeped in Islam.”  Wright had been set to give an invocation after Obama first announced his candidacy for the presidency, but Obama asked Wright not to appear one day before it was scheduled to take place.

Kilpatrick had visited Wright’s church and “heard numerous amounts of his speeches” as well as defended any of Wright’s remarks which many found offensive.

Obama distanced himself from Kilpatrick and Wright as the campaign season advanced, and Wright retired from Trinity in April 2008 after some of his sermons became public.

Obama’s other “colleagues” are Chicago former scandal-ridden property owner, Valerie Jarrett; former fundraiser and “friend,” convicted felon Tony Rezko; former campaign co-chair and U.S. representative, Jesse Jackson, Jr., who is awaiting sentencing for misuse of campaign funds; Rod Blagojevich, former governor of Illinois, who was sentenced to 14 years in federal prison for corruption; William Ayers, co-founder of The Weather Underground, a domestic terrorist organization which had planned to attack Ft. Dix, NJ and “just a guy who lives in my neighborhood;” and Rev. Louis Farrakhan, leader of the Nation of Islam, having assumed the prominent leadership post vacated by Malcolm X in 1964.

Farrakhan preaches communal ownership of land and other assets, and Obama believes in “spreading the wealth around.”

Decrying the elevated crime in Chicago, Farrakhan claimed that violent “gang bangers” could be trained to protect his organization’s property and personnel.  Obama referred to “gang bangers” during the second presidential debate.  While Farrakhan decried the criminals’ illegal guns, Obama fantasized at the Gridiron Club on Saturday evening about a meeting in which he would “show up at somebody’s house with guys with machine guns” after invoking reporter Bob Woodward’s name.

It has long been known that “Birds of a feather flock together.”