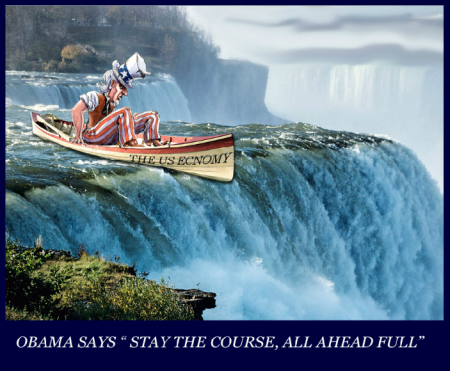 (Feb. 23, 2013) — As March 1st looms closer and closer and the dreaded automatic government spending cuts begin to kick in, the fear mongering, the deception and the out an out lies smothering the American people like swamp swill are beginning to reach a crescendo.

Usurper Obama and his propaganda production company, better known as the Main Stream Media, have been misrepresenting not only where the sequester idea originated, but most despicably of all, what the effects of it will be.

Again, and as always, the Liar-in-Chief, counts on the fact that 80% of the American people’s eyes gloss over at the mention of of big numbers.  And others will not take the time to try and do some basic math.   No wonder this country is in such a dire predicament.

First it is important for each of us to know, Obama has been lying about the authorship of this “Sequestration” for more than a year and has continued to do so as late as this week, even as his nitwit press spokesboy, Jay Carney, was forced to admit the truth.  By the way, the media, always professional, never once, even during the Presidential debates, ever tried to correct Obama’s lies.

Here is the truth.  The idea, concept and amount of the Sequestration was produced in the White House by Jack Lew, then Chief of Staff and White House congressional relations chief Rob Nabors and of course America’s quintessential evader of reality and poser as President, Hussein Obama.
Not the Republicans, but Obama and his administration created “Sequestration.”

And for certain, just as the left never intended nor will ever intend to build a border fence, after promising to do so, they devised this sequestration but never intended for it to be implemented.  But unlike the wall, sequestration may backfire on them and actually take effect.  That of course is why the lies about where it came from are raining down across the “Fruited Plains.”

Now, a little bit of fact accompanied by some math:

2. The actual automatic cuts for one year will be $120 Billion.

3. The approximate automatic increase in the budget, which is not affected by the sequester, will be $180 Billion each year.

4. Even if the sequester does kick in, the government will still spend $60 Billion more  than it did in the previous year.

5. Your government spends $10 Billion every day of the year.

6. They  will spend the entire sequestration amount in the first two weeks of January 2014.

7.  The sequestration will cut less than 1/3 of one penny of every dollar the government spends.

These are the facts. So when you hear the ineligible usurper and his cohorts talk about all the government programs which will be shut down you will understand that the entire sequestration cut would not even close down one medium-sized government program, let alone the hundreds of doomsday scenarios we have been hearing about.

You should now have a better perspective on why this country is in such economic mortal distress. Even these barely negligible cuts to the more than $36 Trillion which will be spent in the next 10 years cannot be discussed without scare tactic lies and demagoguery.

Hussein Obama, the Democratic Party and the media have placed our economy in a boat headed for Niagara Falls.   But not to worry, no matter what happens, conservatives and the Tea Party will get the blame.