“THE ENEMY FROM WITHIN”

(Feb. 8, 2013) — On Thursday, putative Defense Secretary Leon Panetta testified to the Senate Armed Services Committee that Obama did not communicate with him after 5:30 p.m. on September 11, 2012 while the U.S. outpost in Benghazi, Libya was under siege, resulting in the deaths of four Americans.

Panetta told the committee that Obama had directed Joint Chiefs of Staff Chairman Gen. Martin Dempsey and him to “do everything we needed to do” and that Obama was not heard from again that night following a 30-minute face-to-face meeting among the three in the Oval Office from 5:00 to 5:30 p.m.

During questioning, Sen. Lindsey Graham asked Panetta if Obama had been aware of the “level of threat,” to which Panetta responded, “He knew about the deployment of forces.”

However, no forces were deployed to intervene in the attack or conduct a rescue mission, which Graham immediately pointed out.  In fact, the Associated Press reported that U.S. military forces did not arrive in Benghazi until “more than 15 hours after the attack on the consulate in Benghazi was over.”  Three requests for help were reportedly denied by U.S. officials, but no one has taken responsibility for the alleged “stand down” order.

Panetta looked at Dempsey while Graham was questioning them as to whether or not “any DOD asset” had been sent to assist the Americans in Benghazi while the attack was being carried out.  Panetta finally answered Graham with “No.”

Obama’s National Security Council spokesman, Tommy Vietor, told Yahoo! News on October 27 that Obama was not responsible for giving such an order.  Obama stated on a radio show that he has “always been straight with the American people.”  Yahoo! has been known to remove photos and articles published about the regime within a short period of time.

At approximately the same time that U.S. troops arrived in Libya in the aftermath of the attack, Obama was speaking with Steve Kroft, a regime-friendly reporter, for a “previously scheduled interview.”

The President shall be commander in chief of the Army and Navy of the United States, and of the militia of the several states, when called into the actual service of the United States; he may require the opinion, in writing, of the principal officer in each of the executive departments, upon any subject relating to the duties of their respective offices, and he shall have power to grant reprieves and pardons for offenses against the United States, except in cases of impeachment.

Did Obama fail to perform his duties that night?  Is Leon Panetta lying?  Who gave the stand-down order?

Panetta testified that “information” regarding the death of Amb. Stevens “went to the White House” but that he did not inform Obama of the attack until a previously-scheduled face-to-face meeting at 5:00 p.m., which was reportedly 78 minutes after Panetta learned of the attack himself.  CNS News and others reported that Biden was in the meeting with Obama and Panetta, not Dempsey.

A Fox News interview related on The Blaze dated October 28 between Lt. Col. Tony Shaffer (Ret.) and Judge Jeannine Pirro contends that Obama and others were watching video from two drones flying over the attack site “in the middle of the business day” on September 11, which, if accurate, would have meant that Obama was informed prior to his 5:00 p.m. meeting with Panetta and anyone else present.

Shaffer stated on another occasion that various “capabilities” were available to deploy to Benghazi to assist the Americans under attack.

On November 12, a writer stationed in Benghazi reporting for McClatchy Newspapers stated that the timeline described by eyewitnesses to the Benghazi attack differed “in significant ways from timelines released by U.S. officials in Washington.”  An article published in a Mississippi newspaper entitled “Witnesses differ with U.S. over when Libya consulate attack began” has been removed from the internet. 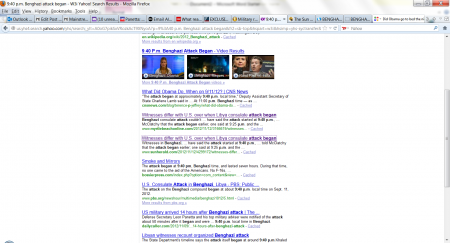 On October 27, The Associated Press reported that “The neighbors all described the militants setting up checkpoints around the compound at about 8 p.m. The State Department’s timeline says the attack itself began at around 9:40 p.m.”

On October 21, a writer at National Review Online said:

On September 11, at about 10 p.m. Libyan time (4 p.m. in Washington), Ambassador Chris Stevens and a small staff were inside our consulate in Benghazi when terrorists attacked. The consulate staff immediately contacted Washington and our embassy in Tripoli. The White House, the Pentagon, the State Department, and numerous military headquarters monitored the entire battle in real time via the phone calls from Benghazi and video from a drone overhead.

He stated that at 5:00 p.m. that day, Obama met with Vice President Joe Biden and Leon Panetta with no mention of Dempsey.

Obama has been on the record as having said that he issued “three directives” on the evening of the Benghazi attack.  A link to a Yahoo! news story purportedly containing those directives now leads to removed content.  The three orders Obama said he gave after questioned by a reporter in late October were to “make sure that we are securing our personnel and doing whatever we need to. Number two, we’re going to investigate exactly what happened to make sure it doesn’t happen again. Number three, find out who did this so we can bring them to justice.”

At what time were those “three directives” issued, and to whom?  Former Assistant Secretary of Defense under President Ronald Reagan Francis West has stated that if “Obama really gave an order to secure U.S. personnel when the consulate in Libya came under assault, there will a paper trail to prove it.”

Obama has stated that in regard to Benghazi, if anyone were found not to have performed his job properly, “they’ll be held responsible.”  ABC News reported him as having said that “ultimately as commander in chief I’m responsible and I don’t shy away from that responsibility. My number one responsibility is to going after folks who did this and we’re going to make sure we get them and I have a pretty good track record of doing that.”

If the president gave such an order, why were urgent pleas for military support denied? Would the military defy the orders of the commander-in-chief? General David Petraeus says that the CIA never denied a request for help — which raises the question: Who else but the White House would have made such a decision?

Former Education Secretary under President George H.W. Bush  and CNN News contributor William Bennett wrote on November 1 that Obama did not directly answer whether or not Americans caught in the attack were denied assistance, as contended by Fox News on October 26.  Bennett added:

Asked to explain the inaction on the part of the Pentagon, Panetta said, “The basic principle is you don’t deploy forces into harm’s way without knowing what’s going on, without having some real-time information about what’s taking place.”

Contrary to Panetta’s claim, we know with certainty that there was real-time information coming into Washington and the Pentagon during the attack. We are therefore left with two conflicting explanation’s for the administration’s inaction — either the president’s directive to secure our personnel wasn’t heeded, or he didn’t exactly give such a directive.

To which “other briefings” between Obama and himself did Panetta refer on Thursday?

Panetta had said that he had needed some “real time information” on the attack before considering deploying military forces into Benghazi.  He reported that General Carter Ham had agreed that troops should not have been ordered to Benghazi.  Several weeks after the attack, Ham was reported to have announced his retirement.  In a statement to counter rumors that Ham was leaving as a result of the events in Benghazi, the Pentagon issued a statement that “Defense Secretary Leon E. Panetta and Army Gen. Martin E. Dempsey, chairman of the Joint Chiefs of Staff, maintain complete faith in the job Army Gen. Carter F. Ham is doing as Africom’s leader.”

A one-star Navy admiral was relieved of his command purportedly over his judgment as reported by a military news source, the complete story of which has been removed from the internet.

Following the attack, the CIA issued a statement denying that anyone in the intelligence agency had denied assistance to anyone during the siege.  Two CIA employees had disobeyed orders to remain in their outpost about a mile from where Amb. Christopher Stevens and computer analyst Sean Smith were located, having attempted to rescue them after the building was set on fire.

At the time, Gen. David Petraeus had served as CIA head, although he resigned after the presidential election purportedly because of an extramarital affair with his biographer, Paula Broadwell.  The CIA director reports to the Director of National Intelligence, who reports to the president.  CIA told Sen. John McCain in a closed-door session in November that he did not “meet with” Obama at any point after the attack on the Benghazi compound was launched.  McCain was quoted as having said afterward, “I can’t imagine a president of the United States not meeting with the director of the CIA, particularly in light of the fact that three of the employees that were killed were CIA employees.”

Obama has been named in the commission of treason for having “watched four Americans die in real time.”  Dempsey has been accused of treason for allowing members of the U.S. Army to deploy into Samson, AL to carry out police activities in violation of the Posse Comitatus Act.

“A nation can survive its fools, and even the ambitious. But it cannot survive treason from within. An enemy at the gates is less formidable, for he is known and carries his banner openly. But the traitor moves amongst those within the gate freely, his sly whispers rustling through all the alleys, heard in the very halls of government itself. For the traitor appears not a traitor; he speaks in accents familiar to his victims, and he wears their face and their arguments, he appeals to the baseness that lies deep in the hearts of all men. He rots the soul of a nation, he works secretly and unknown in the night to undermine the pillars of the city, he infects the body politic so that it can no longer resist. A murderer is less to fear. The traitor is the plague.” – Marcus Tullius Cicero 42 B.C