FROM “THE PARALLAX PROPHECIES” 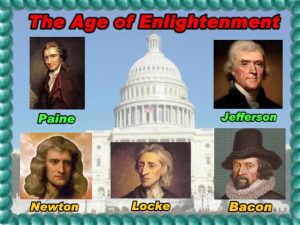 (Nov. 25, 2012) — “To understand political power right, and derive it from its original, we must consider what state all men are naturally in, and that is, a state of perfect freedom to order their actions, and dispose of their possessions, and persons as they think fit, within the bounds of the law of nature, without asking leave, or depending on the will of any other man”. (John Locke, Second Treatise, Chapter 2).

“He that in the state of nature, would take away that freedom, that belongs to anyone in that state, must necessarily be supposed to have a design to take away everything else, that freedom being the foundation of all the rest.  As he that in the state of society, would take away the freedom belonging to those of that society or commonwealth, must be supposed to design to take away from them everything else”. (John Locke, Second Treatise, Chapter 3).

John Locke, author, physician and philosopher (1632 – 1704), did more to influence the creation of the new American Republic than almost any other individual or event.  In fact, a direct quote from John Locke can be found in the Declaration of Independence that referenced “a long train of abuses.”   To gauge how Thomas Jefferson (author of the Declaration) was influenced by Francis Bacon, John Locke and Isaac Newton, he wrote:  “I consider them as the three greatest men that have ever lived, without exception.”  At the time, Jefferson was probably right on all three men, given their contribution to future generations.

SIDEBAR:  None of these three men were perfect by any stretch, and all three were of the privileged class, but their writings on freedom, law, science and politics had great influence on the leaders of the 13 Colonies when drafting the Articles of Confederation, the Declaration of Independence and the U. S. Constitution.  Francis Bacon even forecasted that science and technology would go a long way towards improving the human condition.  He proved to be uncannily prophetic for a man of his time.

“The end of law is not to abolish or restrain, but to preserve and enlarge freedom.” (Second Treatise, Chapter 6).

“And that all men may be restrained from invading others’ rights, and from doing hurt to one another, and the law of nature be observed, which willeth the peace and preservation of all mankind, the execution of the law of nature is in that state, put into every man’s hands, whereby everyone has a right to punish the transgressors of that law to such a degree, as may hinder its violation”. (Second Treatise, Chapter 2).

“For in that state of perfect equality, where naturally there is no superiority or jurisdiction of one over another, what any may do in prosecution of that law, everyone must needs have a right to do.” (Second Treatise, Chapter 2).

In Chapter 11 of the Second Treatise, Locke wrote about the boundaries of the law:

“These are the bounds … to the legislative power of every commonwealth.  First, they are to govern by promulgated established laws, not to be varied in particular cases, but to have one rule for rich and poor, for the favourite at court, and the countryman at plough.  Secondly, these laws also ought to be designed for no other end ultimately than the good of the people”.

With these treatises as the pillars of our individual freedom under nature and the law, it gives us a yardstick on how to judge whether Locke’s basis for freedom is being observed by the current or past actions of the U.S. Government and local and state governments.  If current or past actions of government are working to take away our freedoms by increment rather than preserving them under the law and as is their absolute duty under the Supreme Law of the Land, then we can rightly assume that government has “….. designs on taking away everything else.”

If promulgated law by the “commonwealth” favors the “elite” but restricts the “countryman at the plough,” then we can come to no other conclusion that the “elite” have designs on “….. taking away everything else from the countryman at the plough.”  But we don’t need to assume or conclude these things; our own recorded history has proven it to be so.

We can also ask if the law created by our government over the last 236 years been to “preserve and enlarge freedom,” according to Locke’s Second Treatise, Chapter 6?  In fact, it has been just the opposite.

Keeping this foundation of individual freedom in mind, then how is it that it was the government that declared “individual freedom” for the black slaves towards the end of America’s Civil War?  (See the new movie “Lincoln.”)  Under the absolute foundation of natural rights, no human being, black, red, white, brown or yellow, should have to ask the government for the right to exist in a free state, as mandated by nature.  No government should have the right to interfere with the God-given, natural right of self-determination and free choice of ANY human being, as long as that self-determination and free choice do not impact the self-determination and free choice of another human being.  No government should have the right to mandate that one set of human beings should have to exist under a different set of laws than another human being.  In fact this foundation of equality under the law is codified into American law under the equal protection clause of the U. S. Constitution.

However, there are so many examples of equal rights under the law in America being violated that they would fill volumes.  As one glaring example, why is it that our elected representatives pass laws upon “the countryman at the plough” but exempt themselves from the very same law?  If any law must be applied equally, why did the Obama administration grant waivers to companies and unions from the effects of Obama Care?  Why, under the equal protection clause, is it OK to tax someone who is wealthy at a much higher rate than someone who is not?  Why is it that rural landowners are forced to bear almost the entire burden of environmental protection laws, while their city cousins get off almost virtually scot-free?  These examples are hardly representative of equal protection under the law.

Government did not create human beings; the absolutely natural acts of nature did.  In the religious community, they believe that man was created by a deity, thus the term “God-given” rights.  Government does not have the power to grant individual rights; only nature does.  It follows, then, that when government starts granting rights to human beings, government can also take away those rights.

But nature is fickle.  It demands that to preserve your individual right of freedom you must preserve it by the exercise of force against all other natural forces that are trying to take your right of freedom from you, and there are many.  The deer must preserve its right of freedom and the right to exist by being fleet of foot in order to prevent the predator from annihilating that right.  The smaller fish in the sea must be able to avoid the larger fish that desire to extinguish the existence of the smaller fish.  Nature has devised many schemes to preserve a creature’s survival.  Man was given consciousness, intellect, volition, free choice and self-determination.  These are very powerful forces that can be used to preserve freedom and the right to exist from the attacks of all predators ….. creatures, other men, or governments ….. but only if man has the courage to employ those forces.

The hard truth is, all of life is a fight, be it human, animal, plant, or insect.  It is a fight to exist and a fight to remain free from all those who would limit that freedom or remove it altogether by the power of parasites, pestilence, predators ….. or governments.  If you are not willing to fight for the right to be free or to exist, then you can make no claim to freedom ….. or life.  In nature, only the wary and the strong survive.  The weak die out unless they are preserved by an act of man and are allowed to reproduce in large numbers.  But the reality is, we can only afford to maintain a very small percentage of the weak if a culture has any hope of survival.

“The Parallax Prophecies” predicts that as the weak among us grow, and they are growing, we will reach a point where their weakness will trigger our eventual demise.  The horizon of that demise looms ever closer in the distance.  That Obama was re-elected to a second term is direct evidence that our weakness as a people and as a nation is growing at an increasing pace.

Ladies and gentlemen, so often we forget the foundation of our individual freedoms and their origins.  When we forget those origins as a result of apathy, ignorance, or cowardice, we easily let freedom and even life slip away, as we are doing today in America.

We will sum up our philosophy of individual freedom and survival in one sentence:  “I don’t need government to tell me that I AM FREE, and as required of me by nature, I will use whatever means necessary, peaceful or by force, to preserve my property, my life and my freedom from all who would attempt to unreasonably limit them, or try to take them from me!”

Next week the Parallax Prophecies column is entitled: “Obama’s Socialist America is Teetering On Civil War!”