Now, Will You Fight?

100,000 “SOLDIERS” NEEDED TO ROLL BACK SOCIALIST POLICY IN AMERICA 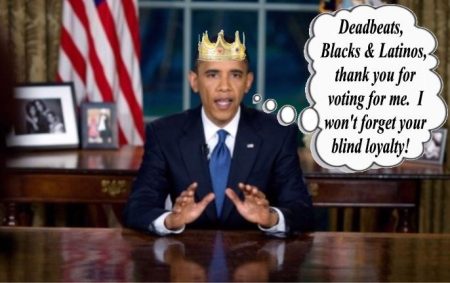 (Nov. 11, 2012) — In an article we wrote almost exactly four years ago entitled, “Big-City Socialist Voters Now Own America,” right after Obama won the 2008 election, we forecasted, quite accurately, what would happen to America in the next four years.  Yes, we knew what was coming but it wasn’t hard to predict if a person understood Obama and his background, associations and mentors.  We wrote:

“King Obama has ascended to the throne and the Electoral College has now become irrelevant with all of the votes being concentrated in socialist big cities and the rural areas of America facing total disenfranchisement.  The Heartland of America has become the big city’s playground and plaything.  A foreign government, or at the very least, a foreign idea, through the surrogate Obama, has taken over power in America.”

“Every rural landowner, every producer of goods and services and every small or large businessman in America had better batten down the hatches, because the liberal mandate that has just been handed to the Democrats by big-city socialists, will manifest itself in more expensive social programs, greater social spending, accompanied by higher taxes and an exponential increase in radical environmental legislation.  You can kiss your property rights goodbye……. for now!  History will repeat itself as FDR socialism will be re-born in America as the New-New Deal.  Government will be all things to all people, no matter how much it costs, or what constitutional rights we have to give up.  The Constitution is hanging by a thread and is just about to fall into the abyss.”

“The environmental lobbyists are jumping for joy.  With no one to stop them, watch old environmental legislation be strengthened and watch new environmental legislation be spewed out of congress like cord wood over the next four years, that will include global warming CO2 emission limits and cap and trade policies, increased wildlife set-asides, more conservation easements, more endangered species designations, more eminent domain take-a-ways for reserves and wildlife corridors and a host of other little un-niceties that will hit all of us in the pocket book as well as our freedom, liberty and property rights.”

“Watch as more legislation to stop drilling for oil anywhere in the U. S., including offshore, is passed into law.  Watch as huge government subsidies are applied to alternative energy, like inefficient wind, solar power or bio-fuels.  Watch as more limits are placed on coal, natural gas, hydro and nuclear power plants, such that none will get built and others currently operating will be forced out of business by increased regulations.  Watch as more limits will be heaped on the car companies to get better fuel standards, when the trade-off for better fuel standards will be more dead people from smaller, weaker cars.”

“Watch as unions gain greater power and a larger foothold in American businesses and especially government.  Watch as the dollar shrinks and prices rise.  Watch as your assets in the markets evaporate or go up in smoke.  Watch the national debt soar into the stratosphere with no chance of ever paying it off.  The privately held Federal Reserve and foreign countries will own our debt and thus own us.  Our collateral for those loans could very well be our national heritages and land that government has been locking up for many, many years.  Our government might very well have to sell off America a little piece at a time, just to satisfy the national debt.”

Just watch the next four years!  The Blacks, Latinos and young, single women put Obama back in the President’s chair and they are going to want payback, big time.  The blacks will finally get their reparations they have demanded for decades.  (Actually, Blacks have been getting reparations for years) The Latinos (illegal aliens) will get their amnesty they have demanded for decades, along with free health care, free education and welfare.  And young, single women will get their so-called reproductive rights fully protected, along with their free contraceptives.  All of the above will be paid for on the backs of those in our society who are self-reliant, independent and individually responsible for their own actions.  It remains to be seen if the Republicans in the U. S. House can stop an Obama-Black-Latino-Young Woman onslaught.  They might slow Obama down, but can they stop him?  All he has to do is issue an Executive Order to get what he wants, as he has done it before.

IS THERE A SOLUTION TO THIS MADNESS?  As we have stated in previous columns, a smart general never takes on the entire army in one frontal attack, as the American conservative voter tried to do in the 2012 national election.  You can’t win if the enemy has more men and more guns ….. or more votes, or the enemy lies and cheats.  The smart general nips away at the enemy’s supply lines and outposts on the perimeters of the battlefield.  He infiltrates their headquarters with spies.  He takes out stragglers and attacks enemy encampments that are poorly defended, not unlike the Benghazi attack by well-armed terrorists that murdered our Ambassador and three other Americans in Libya.  The smart general takes his time and builds up his men, materials and resources before he ever confronts the major forces of his enemy.

The “fix” to America’s problems are not national, they are and always have been, local, one small skirmish at a time.  No, we don’t have to go to war with the enemy.  We get educated on the issues and then PRESSURE the politicians and bureaucrats to see it our way, peacefully.  It would only take five to ten dedicated and committed men or women to challenge the local school board, or the city council, or the county commissioners in their area, on substantive issues by being in the government’s face at public meetings and hearings and behind the scenes.  It might take a few more than that for the very large cities.  By being aggressive, controversial and professional they would attract the attention of the print and electronic media.  Remember, the press can’t tear themselves away from controversy.  They thrive on it.  It sells ad space.

These dedicated soldiers would challenge every act of local and state government.  They would first educate and then enlist the help of those that are directly affected by what government is doing.  They would regularly write letters to the editors and guest editorials to the local media on the issues they feel are most important.  They would prod, poke and probe every government function including the budget and generally make a nuisance of themselves until they get heard.  Where feasible they would sue the government, especially if there was a broad precedent that could be set.  They would make frequent Freedom of Information Requests to government to get the information they need to expose unlawful actions or corruption.  Five to ten people in every small city, hamlet, town or county in America, coordinated and aligned with one purpose under one banner, could take back America from within, in five to ten years ….. that is, if you could find five or ten aligned individuals in any given area with the courage to take on the government all across the country on a large enough scale to make a difference.

How about it?  NOW WILL YOU FIGHT?  Be part of the 100,000 soldiers that will take on politicians, judges and bureaucrats at the local level?  Or, be one of the 1,000,000 freedom-loving Americans that would make a contribution to the cause.  If you are either one of these American patriots, get more information HERE!

In any event, with Obama being re-elected, maybe now the people will take this fight seriously and get involved.  Nevertheless, we’re not holding our breath.  Sure, there are some of you spoiling for a fight-fight, but guns will not stop America’s headlong dash to national suicide, only the hard slogging through the mud of government and exposing its corruption and unconstitutional acts, at every level but especially at the local level, has any hope of saving America.   Rest assured, it won’t be a short fight.

To their credit, some state legislatures are challenging the Federal Government through the act of nullification on several fronts, mostly over Obama Care and gun control laws.  We applaud the heroic efforts by these states.  Hopefully, other states will have the courage to follow suit.

Today, we celebrate Veterans Day. (previously Armistice Day)  In November 1919, President Wilson proclaimed November 11 as the first commemoration of Armistice Day with the following words: “To us in America, the reflections of Armistice Day will be filled with solemn pride in the heroism of those who died in the country’s service and with gratitude for the victory ….. “

American men and women in uniform have been DYING for their country for over 200 years to defend freedom against foreign enemies.  How is it that those for whom those men and women died, will not lift a finger to save America from a domestic enemy?  Is it true that Americans can no long “handle” freedom because they have exchanged their liberty for security and “free” stuff?  If it be so, then America is doomed.

One last note on the election:  Romney lost because he tried to play the polite, disciplined gentleman in a den of ruthless, immoral, cut throat thieves and pirates.  His loss is a free America’s loss.  After four more years of Obama and Reid, we’re not sure that America can survive as the Constitutional Republic it was designed to be, unless Americans are now ready to seriously fight for their freedom.

We have stated previously that the November election would be an indicator of whether America was ready to return to its roots of freedom.  It obviously wasn’t with the re-election of Obama!  We were sorely tempted to pack it in and say to Hell with it.  But that would be the cowards way and we are not cowards.  So we intend to be here, shining every Sunday under the banner of the “Parallax Prophecies“, until our “light” goes out from natural causes, or is snuffed out by an ever-growing and more powerful domestic enemy.

2 Responses to "Now, Will You Fight?"