They Came After Us, Like Cowards in the Night! 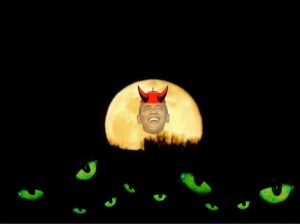 (Nov. 3, 2012) — “It is at the family fireside, often under the shelter of the law itself, that the real tragedies of life are acted; in these days traitors wear gloves, scoundrels cloak themselves in public esteem, and their victims die broken-hearted, but smiling to the last.  What I have just related to you is almost an every-day occurrence; and yet you profess astonishment.” — Émile Gaboriau, French writer, novelist, and journalist, 1832-1873

So many of us profess to be smart, educated, knowledgeable and wise and yet we are taken in virtually every day by scoundrels and traitors that walk the halls of government and talk out of both sides of their mouths about freedom, liberty and the American way.  When we discover their treachery or corruption, our mouths drop in disbelief.  We cry, “How can this be?  Are not those that represent us honorable men?”  After a brief moment of registering our disgust and disdain with politics as usual, we return to “Dancing With The Stars” or the “Wide World of Wrestling,” while the politicians return to treachery and corruption, no longer anxious that the people might actually rise up and challenge them.  The politicians have nothing to fear when the people are paper tigers.  But if we know all this is being inflicted upon us and we do nothing, then we are the cowards, not the politicians, not the judges and not the bureaucrats and we deserve what we get.

In a recent article entitled “Government in America” by Dr. Tibor Machan, he opened with this:

“The central achievement of the American Revolution was to demote government to a role of cop on the beat. The monarch stopped being the sovereign; the citizen became sovereign instead.  Self-government became an aspiration for all people not just rulers.”

“The idea became prominent, at least for a while, that government’s proper role is to secure the natural rights of the citizenry.  There was nothing there about a nanny or a regulatory state.  John Locke, who identified the most principled version of the classical liberal conception of government, argued that since in “the state of nature” – i.e., prior to civilized society – some people may pose a serious threat to others, a system of laws is needed so as to mark everyone’s sphere of authority, a region within which one is in full charge and which others must respect instead of trespass upon.”

The Founding Fathers even went so far as to codify this noble philosophy into a governing document that we call the Constitution of the United States.  It sounds all warm and fuzzy, doesn’t it?  Except there are two things missing from the equation in order for the new system to protect individual rights.  The first thing missing is that there is no installed mechanism in the system to keep those that are charged with the duty of preserving individual rights honorable.  The second thing missing is there is no way to instill in the population being governed by this great document the absolute requirement to hold those that govern them accountable.  If the governed don’t care that the governors are honorable, human nature being what it is, the governors will become corrupt.

The question is, how corrupt will the governors become, if the governed aren’t paying attention?  The answer is they will become corrupt to a point at which they will assume absolute power.   Upon achieving absolute power, the people will be astonished and dismayed, but by then they will be in chains and it will be too late.

Just how corrupt have the governors become?  The fact is that in the last 221 years since the Constitution was ratified, there have been so many actions by government that have no constitutional authority whatsoever that the constitution is now unrecognizable from its original form, or the intent of those that drafted it.  Sure, the document had some flaws but those in government, instead of fixing the flaws, have exploited them with the sole purpose of expanding their power.  Even though the federal government was limited to 17 enumerated powers by the provisions of Article 1, Section 8, every time they got the chance, they blew large holes in those enumerated powers, aided and abetted by the U. S. Supreme Court.  The “necessary and proper” clause and the “commerce” clause were two of the enumerated powers that are now so corrupted, they bear no resemblance to the intent of the Framers.

That is how we got the 16th Amendment that formed the Federal Reserve and instituted the Internal Revenue Service (IRS) under President Wilson (a Democrat).  The IRS was necessary to assure payment to the privately-owned Federal Reserve for the loans it would make to the government.  Federal power took a giant leap forward because the power to tax is the power to enslave.

That is how FDR (a Democrat) was able to pass into law blatantly unconstitutional socialist legislation (the “New Deal” and “Social Security”), fully funded by the power to tax under the IRS.  FDR issued over 3,400 Executive Orders during his three terms in office with the sole purpose of circumventing the U.S. Congress, a direct and open violation of the Constitution. Freedoms were lost and entitlements were born under FDR and entitlements grew with a vengeance.

That is how Obama and the Democrats in the majority in Congress shoved Obama Care down our throats.  That is why the U.S. Supreme Court, the supposed final arbiter of constitutionality, went along with the President and the Congress to uphold Obama Care.  And that is why entitlements are expanding way beyond the capability of a prosperous nation to pay for it all, with national bankruptcy being the final result, along with the riots that are sure to follow, just like Greece.

The inescapable fact is, once government is no longer constrained by the limits placed upon it by the Constitution, absolute power cannot be far behind.  The unquestionable axiom states that “Once you break the rules, it becomes easier and easier to break them again and again.”  If the people allow the rules to be broken, they get what they deserve.

For over 100 years, we have let the cowards descend upon us in the dark of night and steal our freedoms, while we were preoccupied with expanding our “stuff,” to the detriment of all else.  In our absence, we let our freedom slip away.  We can reclaim our freedom but now it will be at great cost.

Albert Einstein was quoted as saying:  “I fear the day when technology overlaps with our humanity.  The world will only have a generation of idiots.”  It appears that his words were prophetic, since only a dumbed-down technological idiot would vote for Obama.

Ladies and gentlemen, Barack Hussein Obama (a Democrat) is just a glaring symptom, an open ugly wound and a carrier of the flesh-eating disease that is devouring America; he is not the cause.  But if there is any hope of ever re-instituting the stated purpose of the Constitution, that being the preservation, protection and defending our unalienable, individual, God-given rights, Obama cannot be given a second term.  Why this race is so close is a testament to how well the Progressives (Democrats all), over the last 100 years, have fundamentally transformed America into a “Gimmee!” culture through relentless anti-American, anti-free markets, brainwashing and indoctrination.  If Obama wins a second term, America and constitutional freedom lose, maybe permanently.  Those who don’t get it are simply blind to history, blind in intellect and blind to reality.

There are just two days left before November 6th and the national election.  It is time to get up off the couch, turn off the television and do the most patriotic thing you have ever done ….. denying Obama a lame duck, four-year term in office where he will be free to do just about anything he wants to do, including changing the character of the U.S. Supreme Court to his socialist image by appointing radical left-wing justices and circumventing the Congress by issuing a never-ending stream of Executive Orders in the spirit of FDR.

“The Parallax Prophecies” predicts that if Obama is re-elected and allowed to finish his agenda of fundamentally transforming America and he is not stopped by the Congress, within the next four years riots and maybe even civil war could break out all across America.  And even if Romney takes the Presidency and the Republicans control both Houses of Congress and they don’t immediately address the financial problems facing America, riots and civil war could still break out as we fall over the fiscal cliff all of the experts say lies in front of us.  America will then become just another failed experiment with freedom because the people allowed the political cowards to come after their liberties in the dark of night.   America will have failed because the people succumbed to the siren call of government for free “stuff” and became the “Gimmee!” people, instead of honorable, self-reliant, responsible, prosperous and free people.

They Came After Us, Like Cowards in the Night! added on Saturday, November 3, 2012