The Armchair Patriot and Freedom

FROM “THE PARALLAX PROPHECIES” 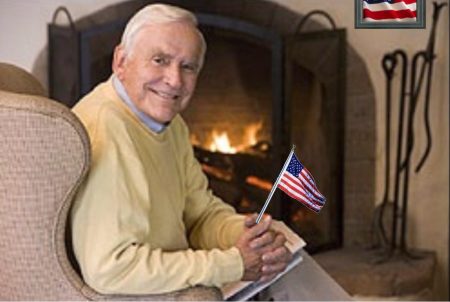 (Sep. 16, 2012) — “Men fight for liberty with hard knocks.  Their children, brought up easy, let it slip away again, poor fools.  And their grandchildren are once more slaves.”  — D. H. Lawrence, Classical American Literature, 1922

Words never won a war.  Wars are only won by smart generals, a winning strategy, by many boots on the ground and a commitment of time, energy and money by individuals and groups of individuals who strongly believe that the outcome of the war will lead to a better place.  In some cases of war it is necessary to commit your own life so that victory is achieved.

The war to preserve freedom is no different than any other war.  If freedom cannot be won by peaceful means, then if freedom is to be preserved, violent war is the only other viable alternative.  The third choice, which is the preferred choice of those with no backbone or on the government dole, is to capitulate to enslavement.

When freedom is on the line, each individual who believes in freedom must make one of those four choices: do nothing while resting comfortably in his armchair, win freedom peacefully, win freedom by violence, or capitulate to being a slave.  That is the precipice upon which every American who cherishes freedom is now perched.   Without action and involvement, all the rest is empty words, talk, hot air and yes ….. BS.

Thousands of articles and millions of words fill print, airways and cyberspace every day about what we must do to preserve freedom.  Thousands of armchair patriots echo these “words” of freedom while they sit in their comfortable chair and wave a flag, or tune out and change the channel.  But unless millions of undivided Americans decide to commit to preserving freedom by whatever means and at whatever cost, freedom will slowly wither and die an agonizing, writhing death, as enslavement fills the gap left behind.  It’s almost dead now.  History is filled with nations that let freedom drift into slavery by apathy, indifference, or lobbying government for goodies, which government is only too anxious to deliver, in return for a vote, undivided loyalty, or obedient compliance.

For over eight years now we have put out our words of freedom in our weekly articles and in information we insert on our websites.   But that is not all we have done.  We have developed initiatives in which people could involve themselves in an effort to preserve that freedom.  Each time we have floated an initiative to take on our domestic enemy, it is met with deafening silence.  Now that is our fault because we “assumed” that there were people in our reading audience who were truly interested in defending freedom.  We “assumed” that people would get up out of their armchairs and relish the chance to make a difference.  But our assumptions were wrong each time.  Most people have no intention of getting involved, especially if “work” is required.

We hear this lament from other activists who bust their butts in not only getting out the message, but putting untold hours of unpaid time and effort (and money) to actually do something about it, while they are timidly applauded by those who are afraid to lift their heads above the noise level.  This defines the stark dividing line between the hero and the coward.  For this very reason government doesn’t fear us; we still fear them.

Meanwhile, the enemies of freedom (socialists, radical environmentalists, the one-world-order crowd and the government itself) have millions of followers who shower millions of dollars on the enemy, a paid staff from which they can lobby government and emit a constant stream of propaganda, academia that gives birth and importance to their false and flawed ideology and a media that hangs on and propagates the enemy’s every word.  Most freedom groups are starved for money and can barely keep the lights on.  God knows why they even bother when so few care about freedom, or are ignorant of the cost to preserve it.  With a couple of exceptions, our contributions have fallen to virtually zero and the only thing that keeps “the lights on” are the sales from our powerful, legally intimidating No Trespassing signs.

Our attempts to get people interested in becoming a Citizen Investigator for the Open Resistance Defense Council of America (ORDCA) to root out political corruption, fell flat on its face.  It took us several months to develop the ORDCA plan, but not a single individual contacted us in the first 4 days after the launch.    Consequently, all references to ORDCA have been deleted from our websites.  Nevertheless and even suffering under the dilemma of declining resources, we will continue to write hard-hitting articles under the Parallax Prophecies column.

Interestingly, one person did contact us on ORDCA, after we had removed it from the website.  He was noticeably disappointed that we had done so and said this:  “Just got to your article and tried to sign up.  Like a shock from a lightning strike, the website says “canceled for lack of interest”!   Good grief, is that accurate?  Your plan is exactly what is needed. The elite control of our political system will just get worse if people don’t commit some of their time to exposing corruption from all levels.”

Now we can re-start the program if there was sufficient interest, but as it stands right now, ORDCA has been discontinued.  If however, after reading this column, we get a significant e-mail response showing interest in reviewing the details of ORDCA, we will indeed re-start it.  If you are interested, send us an e-mail at ci@narlo.org with your full name and location and request the archived ORDCA link.

Ladies and gentlemen, America and freedom will not be saved by only voting on election day, like so many flag-waving, armchair patriots believe.   However, there are Americans who know what is at stake and take action when threatened.  Perhaps then it is doubly appropriate, these few days after the 11th Anniversary of 911 that we share the story of the passengers on Flight 93 that went to war with an enemy that not only took away their freedom, but threatened their very lives as well.  Even knowing that they could lose their lives in the process, they charged the cockpit doors and attempted to take over the controls of the airplane from the hijackers.  They failed in that attempt, but as Winston Churchill said:  “….. you may have to fight when there is no hope of victory, because it is better to perish than to live as slaves“, which the passengers of Flight 93 did.  We can only stand in awe of their courage.

It is true that our lives are not threatened by what is happening in America today like the passengers on Flight 93 ….. at least not yet!  However, our freedom is in grave peril.  Will we be sitting in our armchair waving an American flag when armed members of the police state haul us off to jail or concentration camps, or will we get up out of those comfortable armchairs and strike a blow for freedom, even though we may endanger our lives, our fortunes and our sacred honor by so doing, as did our Founding Fathers and the ragtag bunch of irregulars that followed them into war?

This isn’t fantasy ladies and gentlemen, it is already happening.  People are being hauled off for trumped up charges and imprisoned or committed to a mental institution, without due process and without warrants.  In Los Angeles County, rural landowners are being hauled off to jail or court at the point of a gun, Gestapo style, if they don’t respond quickly enough to draconian environmental code violation notices.  An Oregon landowner was fined and hauled off to jail for collecting rainwater on his property.  EPA fined a couple over $30,000 per day who were trying to build a home on their vacant city lot in a north Idaho subdivision, because the EPA said their lot was designated a wetland and yet every lot in the subdivision had a home built on it.  Another man was thrown in jail for 150 days and fined $20,000 for cleaning out a ditch on his property that was later designated a wetland ….. after the fact.  As we speak, tens of thousands of Americans are facing the intransigence, arrogance and enforcement of draconian laws at the point of a gun, by an uncaring government that has thrown the Supreme Law of the Land into the trash heap and has descended into the dark shadows of the rule of men.  You just don’t hear about these cases that are happening every day in America, as freedom slips ever deeper and deeper into the black hole of a police state and ultimately fascism.

Ladies and gentlemen, we are only one author writing articles on freedom, liberty, the constitution and pressing issues of the day.  There are thousands of authors doing what we are doing.  However, if we were to go away tomorrow, very few, if any, would morn our absence.  The gap will be filled with more talk and more hot air that will fall on the ears of those who just can’t find the courage to get their hands dirty to preserve freedom.  Well folks, you get what you deserve if you aren’t willing to fight for what is right and what you get is slavery.  Will you fight for freedom before slavery is fully entrenched, when the fight is fairly easy, or will you fight after being enslaved, when the fight may be impossible and the “fight” has all but gone out of you?  The hero charges the enemy without regard to his own safety.  The coward hides in the shadows, turns tail and runs, or sits in the perceived safety of his armchair.  The questions are, 1) will the armchair patriots get out of their armchairs and become heroes and 2) are there enough heroes to preserve freedom and save America from itself?  We may know soon.

The Armchair Patriot and Freedom added on Sunday, September 16, 2012

3 Responses to "The Armchair Patriot and Freedom"