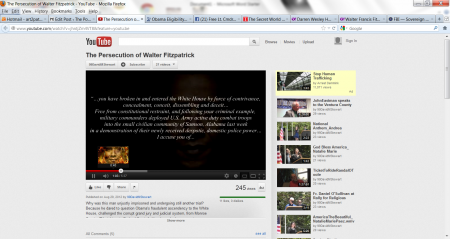 (Aug. 30, 2012) — A video chronicling the saga of Walter Francis Fitzpatrick, III as he has exposed judicial corruption in eastern Tennessee first posted at GiveUsLiberty1776.com has now appeared on YouTube and other websites, including Fitzpatrick‘s.

Three more videos are expected to complete the four-part series detailing the corruption which Fitzpatrick and a Georgia man, Darren Wesley Huff, attempted to expose after exercising their First Amendment right to petition the government for redress of grievances.  Public officials refused to act, culminating in a citizen’s arrest on April 1, 2010 of the de facto grand jury foreman, Gary Pettway, who had served in the position for 27 years.

Fitzpatrick has been incarcerated on five occasions in the Monroe County jail in a retaliatory fashion seen elsewhere in Tennessee.  On November 17, 2011, Capt. Pat Wilson of the Monroe County Sheriff’s Department, another corrupt organization, offered Fitzpatrick a “deal” if he would agree to stop speaking with The Post & Email and other media about the corruption within Wilson’s own department, the judiciary, local law enforcement and state-level officials.  “Nobody cares about this,” Wilson had told Fitzpatrick at the time.

Federal agents used the citizen’s arrest to invent a case against Huff, who is currently serving a four-year prison sentence at a federal facility in Texarkana, TX.  The mainstream media have presented biased and defamatory reports about both Fitzpatrick and Huff since their arrests.  In a search today, some propaganda against Fitzpatrick appears to have been removed or archived, although operatives working to destroy his credibility and that of many others continue to do so under a shroud of cowardly anonymity.

In September 2010, TIME Magazine portrayed Huff and Fitzpatrick as “twisted patriots” without ever having contacted them to obtain their side of the story in regard to the citizen’s arrest.  Fitzpatrick believes that the federal government provided the propaganda for Barton Gellman’s lengthy piece on “militia extremists” and that it ultimately can be traced to the White House.  Both Huff and Fitzpatrick are veterans of the U.S. Navy with honorable discharges and have expressed fealty to their oaths taken to uphold the U.S. Constitution.

Judges in Tennessee have treated the foreman as both an employee of the court and a “juror,” depending on the circumstances and regardless of the state law which mandates that no juror can serve consecutive terms.  While some longstanding grand jury foremen have been dismissed since Fitzpatrick began exposing the problem in 2009, many who have served for decades remain in their posts.  Any “juror” who serves consecutively cannot reasonably considered to be unbiased and becomes a patronage employee of the judge.

Court reporters have also become the judges’ lackeys in some cases, issuing transcripts missing derogatory and incriminatory statements made by the judge during court proceedings.  The Board of Professional Responsibility, the disciplinary arm of the Tennessee Supreme Court, rarely sanctions judges for misconduct, including threatening a defendant and showing signs of inebriation on the bench.

One Tennessee woman told The Post & Email that a judge had “ruined her life” over a six-year period.  Tennessee Supreme Court Chief Justice Cornelia Clark has opined that “court rules” and “decisional law” are equal to statutes passed by the General Assembly, which is not what is set forth in the state or U.S. Constitutions.

Grand juries were established by the Fifth Amendment to serve the purpose of evaluating evidence of a crime against an individual before he or she could be charged.  Some states have done away with grand juries altogether, while others, such as Tennessee, use them as a tool against the very people they are supposed to be protecting.

Fitzpatrick continues to be prosecuted by the Monroe County “criminal court,” despite 1984 laws which directed criminal courts to reorganize into districts.  Atty. Van Irion, founder of the Liberty Legal Foundation, is defending Fitzpatrick against a charge of “tampering with government records.”  A legal defense fund has been established to assist.  In a “Motion to Reconsider Motion to Dismiss,” Irion cites that the foreman had served on “successive grand juries” in violation of TCA 22-2-314.

Compromised grand juries inhibit their ability to objectively evaluate whether or not enough evidence exists to issue an indictment.  Recent mainstream media reports have stated that an investigation has begun into malfeasance in the Tenth Judicial District, including undue influence on the part of prosecutors to the grand jury.   Since 2009, Fitzpatrick has been reporting the same corruption to state and federal officials as well as media companies, who refused to respond.

Last August, Huff and Fitzpatrick were depicted in a federally-funded training program as “sovereign citizens,” considered to be one of the top five “domestic terrorism” threats in the nation by the FBI.

It is The Post & Email’s understanding that The Rutherford Institute has been contacted about the cases of Huff and Fitzpatrick in the wake of the widely-publicized case of a former Marine who was arrested and incarcerated in a psychiatric facility against his will and without probable cause earlier this month.

The Persecution of Walter Fitzpatrick (video)

Updated Video of Fitzpatrick Saga Spreads over the Internet added on Thursday, August 30, 2012