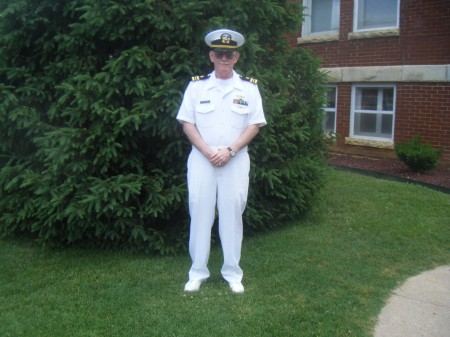 (Aug. 22, 2012) — A trial scheduled for September 10, 2012 in the case against Walter Francis Fitzpatrick, III for allegedly “tampering with government records” in Monroe County, TN has been ordered continued by Judge Walter C. Kurtz.

Fitzpatrick recently retained Atty. Van Irion of Knoxville to represent him in the case for which a probable cause hearing was held on January 17, 2012.  Additional hearings were held on May 4 and June 28 during which Fitzpatrick represented himself.

Irion has filed cases challenging Obama’s constitutional eligibility to have his name placed on the ballot in Arizona and Georgia.  The Arizona case has been appealed to the Ninth Circuit Court of Appeals, and the Georgia case was passed over by the state supreme court and is now pending in the U.S. Supreme Court.

Irion is founder of the Liberty Legal Foundation, which also sponsored a class-action lawsuit against the health care law known as “Obamacare.”

On August 20, 2012, rion filed several motions on Fitzpatrick’s behalf, including a motion to dismiss claiming that “the grand jury member that signed the indictment and served as foreman of the grand jury that returned the instant indictment is disqualified due to service on successive grand juries in violation of Tennessee Statute, as enacted in 2008…” in an apparent reference to TCA 22-2-314, which reads:

A juror who has completed a jury service term shall not be summoned to serve another jury service term in any court of this state for a period of twenty-four (24) months following the last day of such service; however, the county legislative body of any county, may, by majority vote, extend the twenty-four-month period. 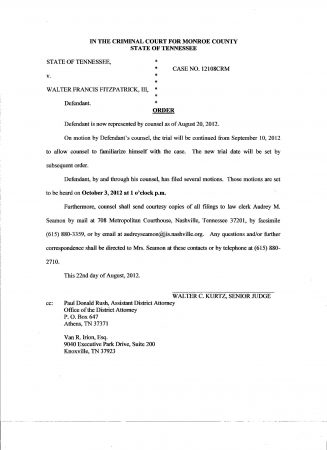 A legal defense fund has been established to assist Fitzpatrick to pay attorney’s fees and possibly pursue other actions.

2 Responses to "Trial Continued in “Tampering” Case Against Walter Fitzpatrick"