“GOD WILL BE CERTAIN THEY GIVE THE REST”

(Aug. 14, 2012) — Todd Sweet, who provided insider details to The Post & Email about the fraud perpetrated on inmate John Edward Dawson now reported at the Chattanooga Times Free Press, is now serving as “Legal Helper/Law Clerk” at the Turney Center Industrial Complex, where he has been housed since late May of this year.

Sweet had been used by the Monroe County Sheriff’s Department to deceive inmate John Edward Dawson into believing that a federal attorney was representing him. Dawson provided a confession to a murder which an appeals court later dismissed, calling the conduct of the “Tenth Judicial District” “reprehensible.”  Monroe County Sheriff Bill Bivens had reportedly not considered “the scheme” to be “a problem.”

Sweet has repented of his crimes and stated that he wishes to make restitution to his victims.

Like Walter Francis Fitzpatrick, III and others, Sweet has alleged misconduct on the part of police officers, prosecutors, judges, grand jury members, and court clerks in Tennessee’s Tenth Judicial District.  The Chattanoooga Times Free Press is now reporting that District Attorney General Steve Bebb, who Fitzpatrick named as “a criminal” more than two years ago, has failed to prosecute law enforcement officers accused of serious crimes.

Fitzpatrick and Sweet have stated that various members of the Monroe County Sheriff’s Department have long been involved in criminal conduct, including stealing legal mail, with the knowledge of Monroe County Sheriff Bill Bivens.  Fitzpatrick contends that “the government” is responsible for the murder of Jim Miller, who was brutally killed on July 17, 2010.

On June 29, 2012, Sweet had filed a 39-page “Petition for Relief from Conviction or Sentence” with Monroe County Court Clerk Martha M. Cook which raised the fact that the grand jury foreman had been serving for “28 years running” and that his “Constitutional Right to a Fair and Impartial Jury” were violated.  Sweet also requested “pre-trial jail credit” for time served and contended that Judge Carroll Ross “failed to recuse himself from this case for conflict of interest.”

Sweet also cites TCA 16-2-506, which ordered the criminal courts to reorganize into districts in 1984.  The judiciary ignored the statutes and continued to operate county criminal courts.

Fitzpatrick has accused Ross of numerous crimes and reported them to the FBI without action to date.

In a letter received today from Sweet, he wrote:

I am in the process of drafting the articles that I have been working on over the past weeks.  I wanted to let you and the readership of The Post & Email know that I have not fallen off the face of the earth.  I have simply been swamped.

It is a blessing to be in this position and I take the responsibility very seriously.  I hope everyone understands.

The great news is that after filing my Post-Conviction Petition, Monroe County officials have now miraculously given me 469 days out of the 900 that they were illegally keeping from me.  God will be certain they give the rest.

The Certificate of Service page bears the printed name of Martha M. Cook as prepared by Sweet. 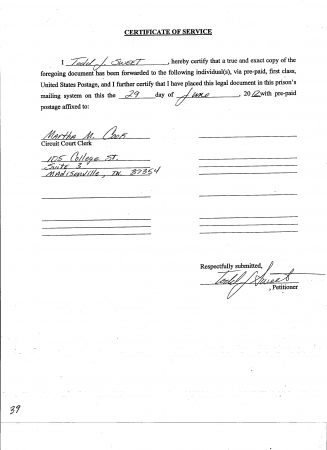 The entire document was too large to publish at The Post & Email, but Sweet’s recent letter provides a disposition of it by the court.

Sweet has been assisting other inmates with appeals, including for his cellmate, Terry M. Jones, on whose behalf a similar petition was filed.   Sweet said he has been studying Tennessee code in his “off time,” which “is not often.”

Sweet also wrote, “I thank you all for the prayers and ask you all to remain patient, yet expectant.  I have some good and juicy corruption subjects I am going to reveal very soon.”

In a closing paragraph of his letter, Sweet wrote:

Everyone see how our prayers are effecting [sic] Monroe County?  Look at Paul Rush’s ethics complaint.  God will whip satan every time.  Now start thanking Him and praying for the Rush family and Mr. Rush to convert from the error of his ways.  He will see that he was used by Stutts and the rest of Monroes [sic] elite corruption players.

Readers can write to Todd Sweet at:

Please be sure to include a return address to ensure delivery.  Sweet can always use postage stamps.