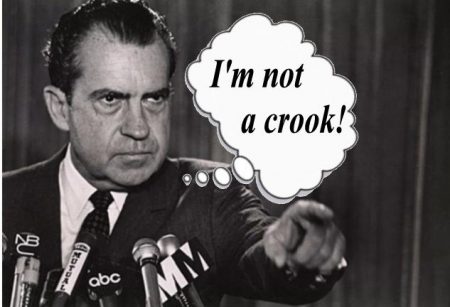 (Jul. 8, 2012) — NOTICE: There will be no Parallax Prophecies column on July 15th.  We will be celebrating a very special family occasion.  The Column will return on July 22nd.

“Corruption is worse than prostitution.  The latter might endanger the morals of an individual, the former invariably endangers the morals of the entire country.”  — Karl Kraus, Austrian writer and journalist

Although there appears to be no agreement on how to define the phenomenon of corruption, it has been generally defined as “the abuse of public office for private gain.”   However, corruption can occur in the private arena as well.  Corruption manifests itself in the form of bribes, patronage, nepotism, theft, embezzlement and diversion of public or private revenues or assets.  It exists in all cultures, countries, religions and institutions in different degrees of severity.  Corruption is, in fact, a negative human characteristic that is only offset by individual and societal honor, integrity and morality.

The history of corruption goes back to the dawn of civilization.  Temptation and opportunity are two of the catalysts that can trigger an individual’s propensity towards corruption.  If a wad of cash is sitting on a counter, a certain segment of the human population will be “tempted” to take the cash if the “opportunity” occurs where the theft cannot be observed.  If a politician is offered a bribe in return for political favors (temptation) and the “deal” can be struck without anyone knowing it (opportunity), the morally-challenged politician will take it.  The sad part is that there are an awful lot of morally-challenged politicians, judges and bureaucrats these days who occupy the halls of government.

Selcuk AcKay, a Turkish professor, states in his treatise on “Corruption and Human Development” (from the Cato Institute) that:  “Corruption is a symptom of deep institutional weaknesses and leads to inefficient economic, social, and political outcomes.  It reduces economic growth, retards long-term foreign and domestic investments, enhances inflation, depreciates national currency, reduces expenditures for education and health, increases military expenditures, misallocates talent to rent-seeking activities, pushes firms underground, distorts markets and the allocation of resources, increases income inequality and poverty, reduces tax revenue, increases child and infant mortality rates, distorts the fundamental role of the government (on enforcement of contracts and protection of property rights), and undermines the legitimacy of government and of the market economy.”  (source: http://www.narlo.org/corruption.pdf)

Many of the maladies that Professor Ackay outlines are prevalent in today’s America.  Unaccountable political power inevitably leads to corruption.  As government grows more powerful, the people begin to tune out and dive below the radar for fear of being the object of government’s attention, because government is so powerful.

Apathy and indifference then set in and the desire or the motive to hold government accountable grows less and less.  The news media (the so-called 4th estate), with its original goal of exposing government corruption, becomes ensnared in the corruption and loses sight of its stated goal.  As attention and interest in holding government accountable wanes, power grows and with it, corruption.  Since no one or very few are observing the actions of government, there is much “temptation” and considerable “opportunity,” these being the inviting catalysts for the immoral politician to spring into action and “fill his or her pockets.”

Unfortunately, humans, predisposed to irrational fear, have allowed the power of the American government to grow past the point of the checks and balances that were established by the Founding Fathers to keep its power from growing and to keep corruption at a minimum.  Corruption is running rampant in America, from the de facto president on down.  (Need we mention the Solyndra payoff and the GM and Chrysler sweet union deals?)

All three branches of the federal government are now or have been involved in corruption in one form or another and at one time or another.  Local and state governments are not immune to corruption, either.  In fact, state and local governments can become a hotbed of corruption if the local citizens aren’t paying any attention.  As an example of local corruption, the leaders in one town in California awarded themselves exorbitant salaries and would have gotten away with it had someone not blown the whistle on them.  Hopefully, these criminals are headed for extended jail terms.

The list of notorious corrupt politicians, judges and bureaucrats in America and their individual stories would fill volumes.  However, only those who were caught and paid a price have the luxury of entering the history books.  Political corruption is like an iceberg.  Most of it lies hidden below the water line.  Exposing corruption is a significant task (and risk) that requires cautiously approaching the dangerous black hole of greed, lust and avarice in the hopes of finding a “clue” to criminal activity.  However, before the advent of the Internet, many corrupt politicians could hide in obscurity without much chance of detection.  But today, everything ends up on the Internet and finding corrupt politicians, judges and bureaucrats is far less dangerous than it used to be.  Now, everything that government does is put in writing and appears somewhere on the Web or in the perpetrator’s files that can be accessed through a “Freedom of Information Act” request.

We know of one couple who were trying to prove their case against the government and their request for documents produced a “sticky” note indicating the bureaucrat admitting he had done wrong.  Case closed!

Institutionalized corruption is like a cancer that eats away at the fabric of a civilized society.  Once accepted as normal, it spreads like a disease throughout society.  It infects individuals as well as organizations, public or private.  In the end, it can lead to the fall of a nation.  Rome became corrupt soon after it went from being a republic to an empire, around the time of Christ.  It lasted another 400 years and then disintegrated.  It was awash in debt and couldn’t manage or control the people in lands that Rome occupied.  The people were fractured throughout the empire and local revolutions were springing up all over the place against Rome’s rule.  Like an avalanche, the Roman Empire fell to its own internal cancer of corruption and tyranny.

Corruption rises when a government tries to enforce a particular agenda or philosophy on the people, such as socialism, communism, fascism, radical environmentalism, religious fanaticism ….. or Obama Care!  If the people resist the agenda, the government raises its enforcement level to a police state and uses the “tools” of force: incarceration, intimidation, coercion, blackmail, propaganda and lies.   Force, intimidation, incarceration, coercion, blackmail, propaganda and lies lead to institutionalized corruption, crony capitalism, political favors and payoffs.  If a country is to be saved from itself, corruption must be rooted out at all levels of government by the people.  The only force that can control government’s rising power, tyranny and corruption is the force of the people themselves.  If the people will not rise up against growing tyranny and corruption, the net result will be total subjugation; in other words, abject slavery.

“The Parallax Prophecies” predicts that until the American people rise up, en masse, against government corruption and tyranny and excise these twin diseases from the body politic by all legal means, America will not survive as a free, prosperous and sovereign nation.   A free America is currently on life support.  Only the people can repair her heart, inflate her lungs, heal her injuries, set her broken bones, excise the diseases that have invaded her organs and breathe life back into her again.   If the people fail to heal America and soon, corruption and tyranny will be their masters.  In the end, America will fall as Rome fell, in a heap of ashes from which there will be no resurrection.

Meanwhile, the corrupt politicians, judges and bureaucrats who caused her to fall will fade away into obscurity, to rise again in another land, free to commit their evil deed of destroying a nation, one nation at a time, because the people, out of fear, will not expose the crook, the politician, the judge, or the bureaucrat and make him pay for his crime.  Unfortunately, if you fear government, you are already a slave.  If you fear government it means you don’t know how government works and where they are vulnerable.  In contrast, the people who don’t fear government are halfway there to winning over government corruption and tyranny.

In fact, there are millions of Americans who don’t fear government and they are advancing to the front lines of open resistance as we speak.  The Tea Party is part of that open resistance.  We have direct experience with and know of situations wherein the people openly confronted government and the government backed down.  If you don’t believe us, check out the story of the Jarbidge Shovel Brigade HERE.

Government is not invincible when it is up against its own people en masse.  They will take you on individually and win every time but when confronted with the people on a large scale, they have two choices:  either 1) back down; or 2) fine, penalize, jail, or, kill the people by the tens of thousands.  Fortunately, in most cases, government backs down.

Ladies and gentlemen, it is a numbers game.  There are more of US than there are of THEM, and that’s a fact and government knows it.  It is also true that nations don’t succumb to corruption and tyranny when the people, by the millions, refuse to fear their government and have the courage to take them on.

Where does ORDCA fit into all of this?

Corruption and the Death of Nations! added on Sunday, July 8, 2012

One Response to "Corruption and the Death of Nations!"