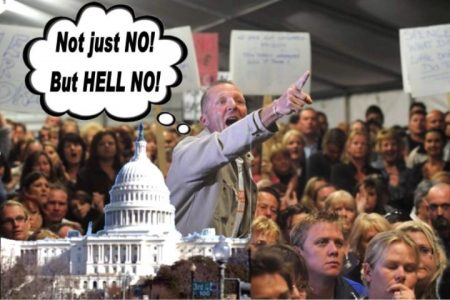 (May 20, 2012) — “Remember, democracy never lasts long.  It soon wastes, exhausts, and murders itself.  There has never been a democracy that did not commit suicide.” —  John Adams, 2nd President of the United States

“Dominance.  Control.  These things the unjust seek most of all.  And so it is the duty of the just to defy dominance and to challenge control.”  —  Robert Fanney, contemporary author

When a government grows more powerful, as the American government has, its power feeds upon itself and it becomes arrogant and secretive.  The more secretive it becomes, the more it will silence those who want to expose the secrecy.  It becomes a power unto itself and it recognizes no restraints or limits.  We are dangerously close to this condition if in fact we aren’t there already.   The final condition is absolute power.

But this issue has been hashed and rehashed so many times by so many different authors it has become boring.  What’s the solution?   What can the producers do so that they don’t end up slaves to the takers and bankrupt like Greece, now facing chaos and anarchy?  How do they break up the cabal between the government and the takers?  How do they sever the entangled ties between big government, big business, big labor and the one-world-order crowd that want to dissolve American sovereignty, steal our wealth and resources, cut off our energy, repeal parental rights and confiscate our land, with our own government’s assistance?

Remember the town hall meetings in August of 2009, where the people displayed their anger over the impending Obamacare legislation?  That was about the time the grass roots Tea Party erupted on the national stage.   Although these events led to a resounding defeat for House Democrats in the 2010 election, we still got Obamacare.  Apparently, the 2009 town hall anger and the defeat of a few House Democrats wasn’t enough to make a needed course correction to a national path that will surely lead to economic collapse, chaos and anarchy.

The government and the takers seem hell-bent on propelling us into oblivion, and there is no current political will to change the suicidal direction we are on.  So how do we trigger a course correction that will truly be effective in restoring our freedom, our national pride and prevent the dissolution of American sovereignty?  We can’t seem to do it by votes.   The takers have an apparent plurality.  And even if all 545 politicians were replaced with new blood, would that in itself be enough to slow down the runaway train we are on?   Not if the politicians pander to the takers in order to keep being reelected because the takers have the most votes.

So the solution becomes changing the national mindset on a large enough scale such that the politicians will end up doing the right thing in the interest of saving America from murdering itself ….. OR, the solution could be a dedicated minority that will “Declare Open Resistance” against growing government tyranny and will have the commitment and courage to stir the pot so vigorously, at every level of government, that the national mindset will have to shift towards survival rather than self-induced suicide.  That’s a tall order.

To not recognize that America is in a state of decay and decline and headed for national bankruptcy is putting one’s head in the sand.  However, if you are a taker, you don’t care, just as long as the government checks arrive at your mailbox or appear as a direct deposit to your checking account and you get to vote to keep the checks coming.  This does not apply to Social Security or Medicare recipients because they paid into the account that now pays them.

However, as a producer, with your income steadily declining to pay for the takers and freeloaders, the problem is paramount.  You know that even if government took all of your income, it would never be enough.  This runaway insanity has to stop and stop soon if national collapse is to be avoided.

If you recognize the problem and the dire implications it has for the nation and for the future of your children and grandchildren, how can you not “Declare Open Resistance” against this growing government tyranny?  America’s salvation rests in the hands of a dedicated minority that WILL “Declare Open Resistance” against growing government tyranny and has the dedication, commitment and courage “to stir the pot so vigorously, at every level of government, that the national mindset will have to shift towards survival as a free nation, rather than self-induced suicide ….. or abject slavery.”

Are YOU ready to “Declare Your Open Peaceful Resistance” against a government that has lost all allegiance to the U. S. Constitution and to the principles of freedom and liberty?  Are you ready to take the pledge to save your country from a government that fully intends to increase its power over the people to the point of absolute power?  Are you ready to defend your country against the merging of America into a hopelessly corrupt global government?  Are you ready to take back your local government from the influence of the United Nations Agenda 21 policies and the U. S. government that is working in collusion with the United Nations against you?   Are you ready to stop the brainwashing and indoctrination of your children in the public school system and our national colleges?  Are you ready to work towards a sane national energy policy that works to increase our efficient energy sources for our growing energy needs and stop the subsidizing of alternative energy sources that are inefficient and costly?  Are you at a point where you will work to repeal Obamacare and lobby your legislators for a sane health care solution that recognizes the sanctity of the doctor/patient relationship?  Are you ready to draw a line in the sand and defend private property rights from all those who would take those rights from you or your neighbor?  Are you ready to stiffen your back against the rising national debt and deficits and work to stop the profligate spending at all levels of government?   Are you ready to exert your influence on federal policymakers to cut back on foreign aid to despots and dictators, restore America’s “Walk Softly But Carry A Big Stick” foreign policy and fully defend our borders against drugs and illegal alien invasion?  If you are ready to do these things, and we are sure that at least a few of you are, we strongly encourage you to take that pledge and make that declaration in writing, HERE, that is if you have finally decided not to hide in the shadows any more.   This is one simple action (that costs no money) you can take that will let government know where you stand as a sovereign American citizen.  Then get involved.  Become a “Deputy Government Watchdog.”

But do not make this Declaration lightly.  You will not be popular with some of your relatives, friends, neighbors, co-workers and associates.  You will be an outsider from those who are quite satisfied with the status quo, especially if they are a taker, or a freeloader.  They will be angry with you for even suggesting there is a problem.  Government may even turn its probing “eyes” on you.  We know, because they have turned their “eyes” on us for what we say and write about.  Our articles and our website are monitored every day by three branches (two civilian and one military) of the government.  It could be that our telephone is tapped by the FBI as well.  But since the First Amendment has not been repealed, we have no fear of government reprisals ….. yet!

Ladies and gentlemen, because we care so much about this country, we have made this Declaration ourselves with the following resolutions, taken from the “Declaration Of Open Resistance” that appears on our website:

NOW THEREFORE, BE IT RESOLVED, that I, the undersigned, an independent, natural born, or naturalized, sovereign and free citizen of the United States of America, being of sound mind and body, do hereby decree, ordain and affirm that I am not a slave, nor will I become a slave of the federal, state or local government, in any respect, or in any regard, and I will only be bound by the federal and state constitutions and by such laws that I interpret to not be in violation thereof, and

BE IT FURTHER RESOLVED, that I will openly resist, by all peaceful means, any attempts by the President of the United States, the U. S. Congress, federal or state bureaucracies, state legislatures and/or county or city councils, to violate my unalienable rights, as codified under the U. S. Constitution and the Constitution of the state in which I reside, and

BE IT FURTHER RESOLVED, that I hereby place government, in all forms and at all levels, on notice that I stand ready to defend my sovereign and individual, unalienable rights by open resistance by all legal means.  However, if it becomes necessary and peaceful means are not successful to preserve my unalienable rights, “I do hereby solemnly pledge to my great country, the United States of America and to all other American free men and women who will defend constitutional liberty and sovereignty, my life, my fortune and my sacred honor” in this pursuit.  .

We have taken the lead on this Declaration.  We have sent a signed copy to some high profile elected officials at the federal level to start, including the de facto President.  You can view a copy of our personal Declaration HERE.  We will continue to send our signed Declaration to more politicians and bureaucrats across the country over time so that they know exactly where we stand.  We have made our Declaration.  We have told them, “Not just NO!  But HELL NO!”  Will you?  Hopefully, we won’t have to stand alone because you know what “they” do to martyrs.

As our 2nd President said:  “Remember, democracy never lasts long.  It soon wastes, exhausts, and murders itself.  There has never been a democracy that did not commit suicide.”

At the end of Winston Churchill’s “Blood, Sweat and Tears” speech, he said this:

“You ask, what is our aim?  I can answer in one word: It is victory, victory at all costs, victory in spite of all terror, victory, however long and hard the road may be; for without victory, there is no survival.”

That too should be the aim of all free men, and today we can show our resolve by “Declaring our Open Resistance” against any and all government tyranny, from whatever quarter it may appear, as it is “…. the duty of the just to defy dominance and to challenge control.”

Update: A Declaration of Open Resistance! added on Sunday, May 20, 2012

5 Responses to "Update: A Declaration of Open Resistance!"