IS THE MEDIA BEING USED AS A PROPAGANDA TOOL?

(May 6, 2012) — [Editor’s Note:  The following is “Part B” of inmate Todd Sweet’s response to the Knoxville FBI’s characterization of his report of potential terrorism in Monroe County as dubious because of his previous criminal activities.  The initial part of his response is here.

Sweet has said that “Satan has his claws deep” in Monroe County, TN.

The copies of envelopes pictured throughout this article were sent in a previous mailing of Sweet’s and listed as having been returned to him by the Monroe County jailers instead of mailed to their intended recipients when requested.  Correction, May 20, 2012:  In a letter received from Sweet on May 19, 2012, he indicated that the letters were never returned to him but were instead retained by the court.  The Post & Email apologizes for this error.]

On December 7, 1941 @ approximately 4:00 AM, the destroyer Ward got a signal from the mine sweeper Condor that trouble was brewing @ Pearl Harbor.  An enemy sub had been spotted just outside the entrance gates to the Harbor. In U.S. waters. [sic]

Warning after warning and no one took heed. [sic]

If my memory of the study serves me correctly, on December 5, 1941 the FBI uncovered a phone conversation placed by someone @ a Tokyo newspaper to a Dr. Mori – a Japanese dentist.  The conversation was odd enough that the FBI sent it to military personnell. [sic]  The FBI was on their job, to [sic] bad no one else was.

The FBI hasnt [sic] been on their job since.

But none the less [sic] they were then and had we took [sic] heed that day, then just a few days later on December 8, 1941 President Roosevelt would not have had to give his famous speech that began..

“…Yesterday, December 7, 1941 – a date which will live in infamy – the United States of America was suddenly and deliberately attacked…”

Countless times since the FBI has failed to do their job and warn and protect the people of the United States.  In 1941 they cared.  It wasnt [sic] always about passing the buck.

I wont [sic] sit and remind all the readers of the many many FBI blunders and blood stains. There are many.  I am certain you can get on-line and find many hyperlinks, should you wish to investigate the facts yourself.  You can start your journey on many sites and discover the real stories from across the country and globe that will interest and sicken you.  You will discover the real stories that are beyond the fiction which you may have previously thought true.

Search the internet yourself and you will find out just how uncareing [sic] and unprofessional many FBI agents, not all, but many really are.

After you have taken the time to review “public source information,” it is then up to you to determine the veracity of the information you recieve. [sic]  Although some of the items may read to “appear” to paint the FBI as careing [sic] and honest, closer examination may prove otherwise.  The determination is left to you, your reputation, your professionalism and your I.Q.

[Editor’s Note:  The preceding paragraph is a retooling of part of the Knoxville FBI’s response to us in regard to whether or not the information contained in Sweet’s original report of the cover-up of a crime could be considered classified or sensitive material.] 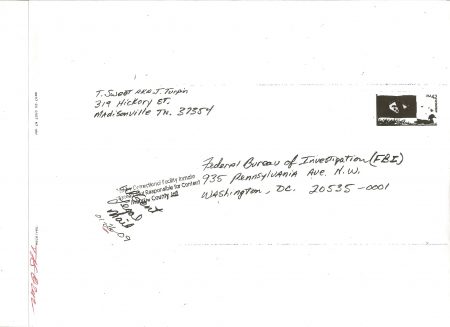 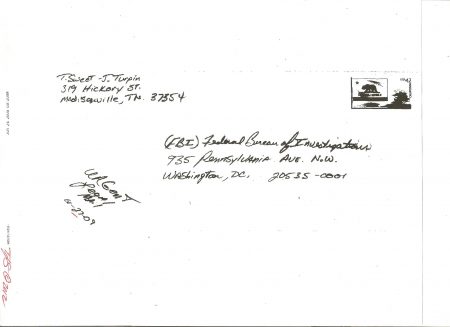 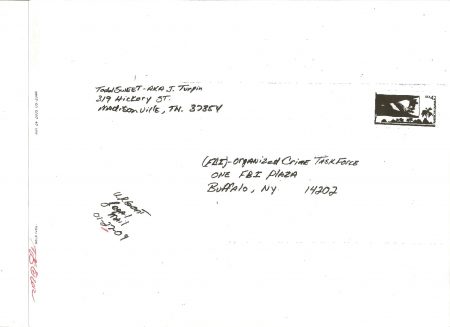 Recently, the Knoxville FBI stated officially that public source information, ie. [sic] media, news, tabloids etc. etc. are 100% accurate and they and we should rely on them for our well being. [sic]

So it is with that I say that whatever you read that paints the FBI as corrupt, uncareing [sic], unjust, unprofessional or murderous…Well, whatever media says, its [sic] all 100% true.  All of it.

They said it, not me.

So its [sic] safe to say that the “people” are wrong.  We expect law enforcement to investigate our problems and potential issues…Crime.  Nope.  All we gotta do is search the net.  You wish to know if someone is credible or honest? 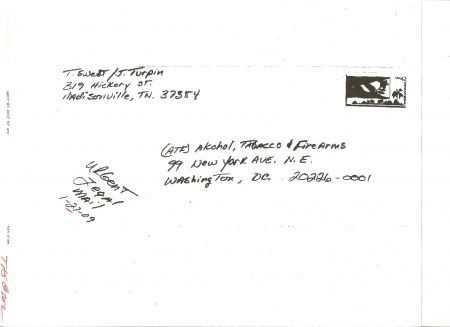 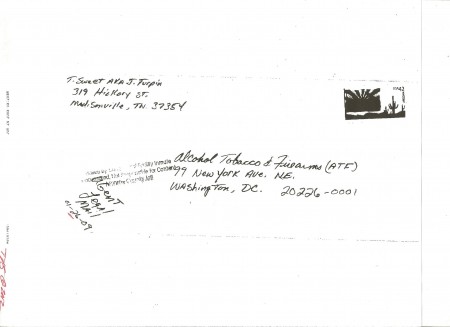 A man walks down an alley and sees a murder, then goes and calls the police to report it….

Nope.  Not gonna go check it out, the callers have past crimes.  They have lied.  Thats [sic] what the net says and its [sic] how the FBI investigates.

Now let me make a statement and a promise and then tell you how I roll.

I state that every single thing I have written is 100% true and accurate.

I promise that everything I will write in the future will be 100% true and accurate.

I roll with Jesus Christ. 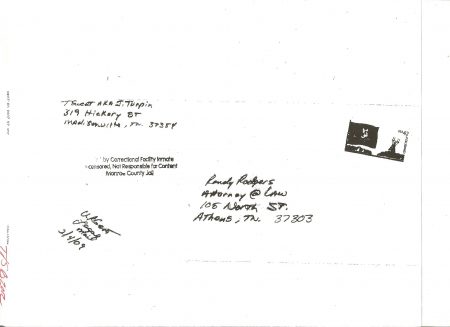 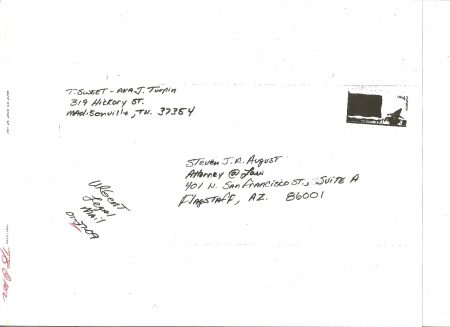 Are you a skeptic?  Then go to the Monroe County Courthouse and demand to see every item available in case 08-081 and 08-082.  Transcripts of all dates including the motion for new trial date.  [sic]  Freedom of Information gives you that right.  Use it.

I’ll up the ante.  Write me a request and I will send you a letter giving you 100% authority to go to my attorney and get the entire case.

You yourself can find out for yourself how corrupt Monroe County is and the Knoxville FBI’s willingness to protect it.

Knoxville FBI allowed mail to be intercepted by Monroe County officials.  Mail addressed to them in regards to terrorism. [sic]

The court record reflects it, the Post and E-Mail [sic] is in possession of proof of that.

They said it, not me.

Its [sic] their job to investigate missing persons.  No wonder why there are thousands in the U.S. missing.

The FBI couldnt [sic] locate the missing on the internet.

No wonder the Twin Towers fell.

The FBI couldn’t tell what planes were jacked [sic] by looking at their lap tops. [sic]

No wonder why countless tragedies happen at the hands of the FBI.

Their computers were down.

Not their fault.  It was the power companies.

But wait.  The “public source information” says it was the FBI’s fault.

And the news and claims stated on public source information is [sic] always 100% accurate.

Well…Maybe about them, but not about me.

Lets [sic] see what Public Source information says about me…

The National Post reported that I “…perpetrated a series of scams in Nevada, Utah, Ohio and Tennessee..”

“In reality when he arrived in Sweetwater, he was fresh out of Sevier County, where he apparently scammed residents out of thousands of dollars, cars and other property…”

Never have I broken or been charged with breaking a law in Nevada, Utah, Ohio or Sevier County.

Have I “devestated” [sic] the town of Sweetwater?

Other than borrowing a truck from an auxilary [sic] police officer whom [sic] gave me the keys and took my vehicle, I have not been found guilty of scamming, conning or taking not a single thing from anyone that is in Tennessee.  Not me.

That person testified that not only had they given me permission to sign the credit card checks, but helped me use their I.d. [sic] to make me a Canadian I.d., that they even took the photo, that they knew I was an escaped convict, that they helped me in a “scam” in Tennessee acting as someone else so I could use their i.d. [sic]

The only devestation [sic] experienced in Sweetwater is when I took off, many greedy people were left standing in the station.  The money train left town.

You wont [sic] find a crime or a sentance [sic] for that crime in Tennessee for any “scam.”

I am charged with defrauding a Canadian by signing her name after she testified she gave me permission.

I am charged with stealing a cops [sic] truck who gave me keys to it and took mine.  He even trusted me so much he left all of his police gear in the truck.  Plice gear I kept safe and was caught with in Arizona. [sic]  He got his truck back in perfect condition.

Im [sic] not making excuses.  These are verifiable facts.

Facts on record.  Facts that are reality.

And whats [sic] more?  The 27 million dollar forgery that I was convicted of in a Monroe County Courthouse didnt [sic] even happen in Monroe County.

They had no jurisdiction.  It went down in Loudon Co. with the rest that were dismissed for wrong venue.

Why did this one stick?

Because a woman by the name of Sharon Smith who goes to church and people claim is an “angel” lied and gave false testimony.  She perjured herself in open court and said she wasnt [sic] there to get the check @ her home in Loudon County.

Last time I looked that was bearing false witness.

I call the “people” and law enforcement to go beyond public source information.

Put up or shut up.

Here is my suggestion…

To a polygraph examiner.

For every one question I ask each person, they can ask me three.

Thats [sic] a short list.  I have many more.  Many many more.

But here is the deal…

Whatever is found out, a criminal investigation into whatever laws are revealed to be broken begins.  Agaist [sic] whoever lies about anything asked.

If I’m telling the truth about the venue of where the check was passed – the 16 years I’m unlawfully doing for it gets dismissed.

And the woman who lied about the venue is charged with perjury.

Bring it, if your [sic] so uncorrupted and legal.

You prove that one single thing I have said on the Post and EMail [sic] is false.  One.

Let us not rely on Public Source information.

I am certain there is someone who would love to see this go down.  Lets [sic] see how much the fee would be and hire as one of the best polygraph examiners in the U.S., come on..

I have changed by Gods [sic] grace and power.

I’m willing to prove it.

You may skirt me and this challenge now, but someday no matter what you choose you will be face to face with Jesus.

You’ll not lie then.

You’ll be held accountable for everything you did or did not do…then.

In His Love and Service

Todd Sweet Responds to the Knoxville FBI, Part 2 added on Sunday, May 6, 2012