Where Did the Press Get its Information on Walter Fitzpatrick and Darren Huff?

(Apr. 30, 2012) — Earlier today, The Post & Email reported exclusively that Walter Francis Fitzpatrick, III and Darren Wesley Huff have had their photos included in an FBI and Homeland Security training package which labels them “sovereign citizens.”

The training materials define “sovereign citizens” as “domestic terrorists” and “people at war with this country,” some of whom are “willing to kill and be killed.” In a video produced by the Southern Poverty Law Center (SPLC) reportedly used to train new recruits for the FBI and other law enforcement organizations, a retired ATF agent states that the “Patriot Movement” began after the shooting of Randy Weaver’s wife, 14-year-old son, and the family dog at Ruby Ridge, ID during which a U.S. Marshal was also killed.  He detailed the Oklahoma City Alfred P. Murrah Federal Building bombing by Timothy McVeigh, and then said, “These events were a catalyst for the growth of a radical anti-government movement.”

The SPLC was founded in 1971 on the premise of ensuring “that the promises of the civil rights movement became a reality for all. The organization studies and counts what it perceives to be “hate groups” and reportedly stands up for the rights of “abused prison inmates,” among others.

Fitzpatrick told The Post & Email that on June 28, 2011, he had met with Knoxville FBI agent Roxane West to discuss corruption in Monroe County, TN.   He stated that West asked him “point-blank” if he were “a sovereign.”  Fitzpatrick said he asked her for a definition and after receiving it, responded “no.”  He stated that he told West that his purpose in exposing corruption in Monroe County was to uphold the oath he took to defend the U.S. Constitution when  he entered the U.S. Navy.  Fitzpatrick stated that West then said, “OK, I believe you.”

“The word ‘sovereign’ has been twisted,” Fitzpatrick said.  “Their definition is different than the original meaning of the word.”  Recently U.S. Supreme Court Associate Justice Antonin Scalia made a reference to the “sovereignty” of the states embedded in the Tenth Amendment, and an Alabama Supreme Court justice described a citizen of the state as a “sovereign citizen” without any negative connotation.

Who is responsible for including Fitzpatrick and Darren Huff in the Power Point presentation?  Fitzpatrick has stated that he believes the trail leads “right up to the White House.”

Fitzpatrick has been aware for some time that despite his numerous conversations with West and others at the FBI, the federal government appears to have acted to label him a “militia leader” and impugn his reputation and character.  Capt. Pat Wilson of the Monroe County Sheriff’s Department had informed Fitzpatrick that he was a subject of the FBI training materials in November 2011 while attempting to convince Fitzpatrick to cease communicating with the press and specifically, The Post & Email.  “The TIME Magazine article was begun right around the time of the citizen’s arrest,” Fitzpatrick said, referring to an article naming Huff and him as “twisted patriots.”

The FBI has labeled what it considers to be anti-government extremists the “Sovereign Citizen Movement.”  The training video goes on to say that “They might ask you for your delegation of authority” if an officer were to make a traffic stop.  It also advises that people’s “names might be in all caps or have hyphens” or “use recording devices,” after which the recordings are “posted on the sovereigns’ websites.”  An overarching description given was “A person who doesn’t believe that you have any authority over them.”

Law enforcement personnel are warned to look for such things as unusual, “homemade” license plates; bumper stickers with the words “posse comitatus” or some other reference; or such stickers on a vehicle saying “I am an American National.”  The video states that “sovereigns may show fake documents” when asked by an authority figure.

Based on the dates cited within the Power Point training presentation, it appears to have been produced between June and October 2011.  Darren Huff’s trial on two federal firearms charges occurred between October 18-25, 2011, after which he was convicted on one count and immediately imprisoned.  Huff has maintained his innocence, stating that he had no intent to commit a crime, and he had been allowed to proceed to Madisonville on April 20, 2010 following an interview at his home with an FBI agent the night before.

Multiple blog posts and news reports intertwine “Obama’s citizenship” with the April 20, 2010 assignment hearing for Fitzpatrick, when in fact, Fitzpatrick stated that the hearing should have taken about “five minutes” and no citizens’ arrests were planned.  Fitzpatrick said that he had no idea that people would be attending the hearing in support of him.  Many postings use the pejorative “birther” to describe both Huff and Fitzpatrick.

The doubts about Obama’s birth story have not subsided since the release of what he purported to be his long-form birth certificate on April 27, 2011, as a recent criminal investigation has declared it to be a “computer-generated forgery.”

Huff is a veteran of the U.S. Navy, serving overseas during Operation Desert Storm.  District Attorney R. Steve Bebb testified at Huff’s trial, but he has been described as part of a “criminal syndicate” operating out of the Monroe County courthouse which denies due process rights to defendants through rigged grand juries which operate at Bebb’s and other public officials’ behest.

Fitzpatrick graduated third in his class at the U.S. Naval Academy and holds Bachelor’s and Master’s degrees.  He had been dispatched and was making arrangements to move to the East Coast to attend the Navy War College when he received a call from a Naval officer advising him that he had been accused of misusing funds from the Morale, Welfare and Recreation fund aboard his ship, the U.S.S. Mars.  Fitzpatrick denied the charges and refused to accept an admonishment, maintaining that he had done nothing wrong.  A court-martial ensued from which a “confession document” emerged with a signature which Fitzpatrick said is not his.  In an internal email, certain parties within the Navy stated that if the forgery could be proven, it would negate the entire court-martial.

There is considerable misinformation about Huff’s intent in traveling to Madisonville, and mainstream media reports have cited that although Huff was allowed to go, then stopped while en route and again allowed to proceed, an FBI “affidavit” exists which is part of the court record.

The Post & Email submitted a Freedom of Information Request to the FBI for the affidavit(s) in question as well as any internal FBI documentation regarding the assemblage of a myriad of law enforcement officers on April 20, 2010, when Huff allegedly planned to “take over the courthouse.”

I am writing to request the following records regarding an event which occurred in Monroe County, TN on April 20, 2010:

* Any and all notes of conversations between and among FBI agents, particularly in the Knoxville, TN office, about plans to assemble an extraordinary police presence in the above location on the above date because of an alleged report of “militia members” planning to “take over the courthouse and the town.”  Media background information:  http://www.timesnews.net/article/9037358

* Documentation revealing which member of the public called the authorities and when regarding the alleged planned “takeover.”  One “William L. Bryan” has claimed responsibility:

* Any and all documentation possessed by the FBI regarding instructions given to the Monroe County Sheriff’s Department about the alleged “takeover,” including who ordered the turnout of more than 100 law enforcement officers and when.

* Information on who dispatched SWAT teams, snipers, Tennessee Highway Patrol, Sweetwater Police, Monroe County Sheriff’s Department deputies, Tennessee Bureau of Invesitation officers, and FBI agents to Madisonville (county seat of Monroe County) for April 20, 2010, on which no arrests were made and no one attempted to “take over the courthouse.”

I am willing to pay reasonable costs for copying and postage for the documentation.

On April 28, 2012, we received the following response from the FBI: 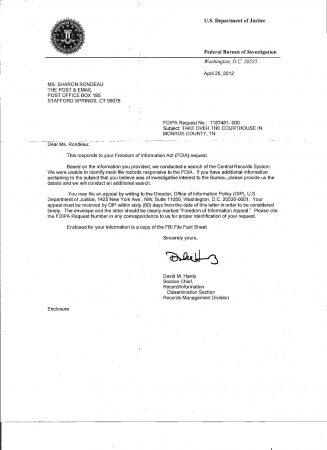 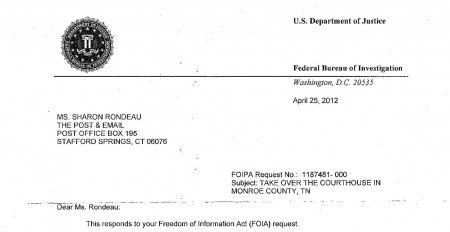 The Post & Email subsequently contacted one of the local reporters who had quoted from an alleged FBI affidavit in a news report.  We were advised that the document can be found on PACER, the federal court records and electronic filing system.  We logged in and entered the case number, name and district, but received a “No records found” message, whether entering Huff’s name last name first or the opposite. 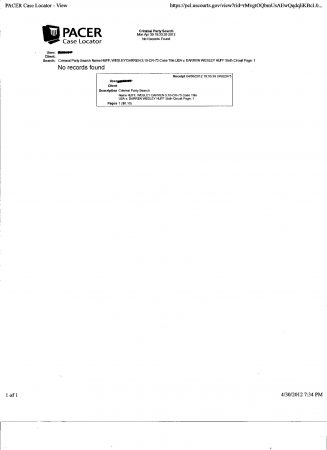 Both searches yielded the same result:

We are relatively new to PACER, and it is possible that something else needs to be done to find the court records.  We therefore contacted PACER staff for assistance and will report on the response we receive.

Fitzpatrick contends that the Fifth Amendment right to a fair and impartial review of evidence by a grand jury followed by an impartial jury trial of one’s peers guaranteed by the Sixth Amendment have been taken away, resulting in the loss of freedom for an unknown number of men and women who were subsequently incarcerated.  The “rigging” of the grand juries has been reported to the Tennessee attorney general, governor, FBI, TBI, local police, and the U.S. Attorney for the Eastern District of Tennessee, William C. Killian, who has recently told the judge tasked with sentencing Huff that Huff intended to “kidnap” officials from the courthouse on April 20, 2010.

Killian, an Obama appointee, has not acted on the criminal complaint of treason filed by Fitzpatrick with his office on March 17, 2009 and renewed on several occasions.

Eyewitnesses have contradicted the statements of District Attorney General R. Steve Bebb and the alleged FBI affidavit claiming that Huff had intended violence in Madisonville that day.

Fitzpatrick told The Post & Email that the claim made in the training materials that he had been arrested for domestic violence referred to what he called a “false arrest,” and that no charges were ever filed.  He stated that under Washington state law, in a domestic dispute in which police are called, one of the spouses must be arrested.

Another statement next to Fitzpatrick’s photograph reads:

Unsatisfied, he attempted a citizen’s arrest on the Monroe County Grand Jury Foreman on April 1st but was arrested himself by Madisonville Police.

Fitzpatrick took issue with the second statement, as his arrest of the grand jury foreman was made because the foreman had been serving for 27 consecutive years and was therefore not an objective juror chosen randomly as mandated by state law. It was later confirmed that the foreman had occupied the position but had never been officially appointed or sworn in.  Other jurors have been found to have served consecutive terms in violation of TCA 22-2-314.

On the third slide subtitled “Day of Fitzpatrick’s Arraignment:” it reads:

Armed protestors arrive in Madisonville, TN to show support for Fitzpatrick.  Due to the Law Enforcement presence, no incidents occur.

Of that statement, Fitzpatrick said, “No one was armed.  There are no police in the photograph.  It was raining.  All there is is a group of people kneeling in front of the Sessions Courthouse in the rain.”

“Here is something for a grand jury to consider,” Fitzpatrick said.  “The Obama White House worked with TIME Magazine using sleight of hand.  They are going after veterans in full-out combat, going after people defending the Constitution.  They are working together to destroy people trying to defend our republican form of government.”

Where Did the Press Get its Information on Walter Fitzpatrick and Darren Huff? added on Monday, April 30, 2012

3 Responses to "Where Did the Press Get its Information on Walter Fitzpatrick and Darren Huff?"