CAN ENDEMIC CORRUPTION LEAD TO A RETURN TO SELF-GOVERNANCE?

(Feb. 13, 2012) — On January 21, 2012,  The Post & Email published an article  titled “Eastern Tennessee Has Been a Hotbed of Corruption for Decades,” stating that The Post & Email has been covering such corruption for about 18 months in Monroe, Roane, McMinn,  Madison and other counties,  including Fentress.  That article contained an excellent link to a “Knoxville News Sentinel” report about corruption in Tennessee over several decades.

I first became aware of the extensive illegal drug and interrelated political corruption problem in this area in about mid-1998, when, as a member and director of the Cumberland Plateau Goat Raisers Association, I became acquainted with a fellow member by the name of Carl Gorton who lived in nearby Deer Lodge.  Within weeks it started to become apparent that Carl was not exactly the person he was claiming and/or pretending to be.  He claimed to be an anti-government patriot and even published an anti-government newsletter titled “The Revelator.”  However, he appeared to spend a lot of time in and around the courthouse and to have almost unlimited disposable cash available.  When I lived in the Pacific Northwest in the 80s and early 90s, I knew a lot of people in the “Patriot Community,”  having been a vendor at gun shows and historical reenactments, and there is no question that this individual’s actions were a deviation from the norm, to the point that he seemed out of place.

Gorton also was giving out free samples of a product he called “RenewTrient,” and many local people liked the feeling the liquid gave them and were buying it on a regular basis.  However, I became aware that the product apparently also had side effects and possible heart complications.  I began to do a little research and discovered that Carl Gorton had spent four years in federal prison beginning in 1992 and had managed to get preferred treatment by agreeing to become an informant.   Part of his arrangement was apparently that law enforcement would overlook his manufacture and marketing of “RenewTrient” and the related kits he was marketing over the internet.  In August 1998, Gorton was arrested and extradited to Michigan on the order of Jennifer Granholm, the Attorney General, and later, Governor of Michigan.   The arrest made newspapers all over the world except locally here in Morgan County, and in every newspaper article his address was listed as Merritt Island, FL, not Deer Lodge, TN.   (This was a perfect example of how news of local corruption, drug dealings, etc. are hidden from the general public by the local media.)

RenewTrient and the kits Carl was marketing contained gamma-hydroxybatyrate,  also known as the “date rape” drug.  I attempted to file a formal complaint at the courthouse and with the Morgan County Sheriff’s Department; however, I was not only met with considerable hostilities, but also with threats, intimidation, and years of judicial prosecution which have had an adverse financial impact on me.  It was nothing criminal, but there was considerable civil judicial misconduct involved.   Being unable to get any professional help, a few of us unnamed local people paid Carl a visit and disabled his production facilities, destroying an estimated $2,000,000 street value of the date rape drug.  We also made it clear to Carl that he was no longer welcome in this community.  A few days later, he moved back to Florida, where we were told he died in an ATV accident some weeks later.

Incidentally, another member of the ‘Plateau Goat Raisers Association’ who was fully aware of Carl’s activities and chose to ignore them was an individual named Bill Phipps, who is currently a County Commissioner in Fentress County.

The Carl Gorton affair was over a dozen years ago, but some details are still available on the internet if one will “GOOGLE” “CARL GORTON GHB,” or one can contact  Trinka Porrata  at ProjectGHB.org.

As a result of the hostile reception  and ”brush-off” I received when I attempted to bring this drug manufacturing to the attention of local authorities, I began to investigate the relationship between some of our local public officials, the drug trade, corruption, property thefts, etc.  What I discovered is that these are not isolated situations, but part of a regional criminal enterprise apparently organized using judicial districts as a foundation.  For decades, members of these criminal enterprises have been able to use the local criminal justice system to control and direct entire families from the cradle to the grave.  The command and control of these criminal enterprises have for decades been the local courthouses or, more recently, the newly-constructed “Justice Centers.”

We live in a very scenic part of the country that attracts lots of tourists and even retirees, especially people who are interested in horses and trail riding.   However, the very qualities that make this area attractive to these people also provide a perfect environment for the cultivation and manufacture of various drugs, especially methamphetamines.  There are hundreds and perhaps thousands of square miles of secluded land bordering or near the national parks with oil-well service roads and/or logging roads, abandoned buildings which used to be chicken coops that are seldom used, seen or visible from public roads.  Apparently these building complexes are ideally situated for the indoor cultivation of marijuana.  The only weak point is the massive amount of electricity needed; however, if the grower has assurance that members of law enforcement will not be checking on abnormal electricity usage, they have nothing to worry about—-it pays to have partners in official positions, or if not partners, to at least be able to purchase protection from them. 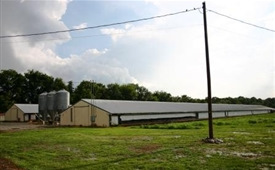 I reached the conclusion that in order to introduce necessary reforms, any such reforms must begin within the criminal justice system in order to be effective.  Therefore, I became active  in the “Judicial Accountability Law Movement,” eventually holding the position of Executive Director  of the Tennessee Chapter of  “JAIL4JUDGES.” It was in that capacity that I first met George Raudenbush shortly after he had been abducted and beaten nearly to death as a result of his efforts to expose corruption in Monroe County.   Over the next few years, I helped George form and promote Christian Citizens Against Corruption, introducing the citizen watchdog concept to many of the other counties and smaller communities.

Many people may be surprised to learn that abductions, threats, intimidation, beating and even murder are not all that unusual in this part of Tennessee.

In the past, The Post & Email has covered several of these abductions beginning with George Raudenbush, then the abduction and murder of Republican committeeman Jim Miller in Monroe County on 17 July 2010 and the modified type of abduction experienced by Kristin in March of last year after the Republican party meeting in Fentress County.

Just a few weeks prior to the Jim Miller murder, two heavily-armed doped-up abductors attempted to abduct a person named Fred Birchfield in Morgan County under circumstances that appear to be very similar to what occurred in Monroe County.   The attempt to abduct Birchfield failed because he was driving his wife’s car which, luckily for him, contained an antique little H&R 22 pistol.  Fred was lucky enough to be able to divert his abductors’ attention for a split second but time enough for him to access the little antique 22 pistol, which at one time proved superior to a 44 mag.  Therefore, Fred is still alive but has been in jail for the past 20 months, having been denied due process and charged with two counts of second-degree murder.    Individuals involved in the drug culture and their partners at the courthouses cannot afford to let people communicate with groups such as the Christian Citizens Against Corruption.  Fred’s story is very complex with many circumstances that appear to be almost unbelievable, including the death of a potential key witness by gunshot just four days prior to his trial.    The complete story will follow in a few days.

Since the citizens of Fentress County met with representatives from Christian Citizens Against Corruption, FIJA, and JAIL4JUDGES in August 2010, a lot of action has taken place, as there are now two lawsuits pending against Fentress County and officials, one in state court and the other in federal court, with the possibility of more being filed in coming weeks.   A group called Fentress Citizens for a Responsible Government has been formed and progress has been made towards a Charter Government concept, which is in the initial stages of being placed on the ballot in the March primary.  The construction of the proposed Justice Center has suffered delays.

There will be follow-up articles as developments unfold.

Editor’s Note:  George Raudenbush was tried on numerous driving violations and convicted on August 24, 2011 after representing himself in a 14-hour trial.  As far as we know, he is a prisoner at the Morgan County Correctional Complex (MCCC) in Wartburg, TN, from which we have learned prisoner Todd Sweet has recently been moved.