FROM “THE PARALLAX PROPHECIES“ 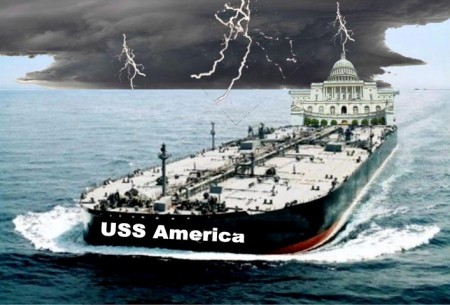 (Jan. 8, 2012) — INERTIA:   “… is the resistance of any physical object or entity, to a change in its state of motion or rest, or the tendency of an object to resist any change in its motion.  The resistance to change is proportional to an object’s mass.  The greater the mass the more energy it takes to effect a change in direction or speed.  This principle applies to objects as well as to cultures and governments.”

It is estimated to take almost two miles to bring a fully-loaded supertanker to a dead stop because of its massive inertia.  So that’s right, you can’t stop a supertanker on a dime and you can’t change the direction of a country in one election cycle.

It took more than 100 years to get where we are today.  America has been on a pre-ordained suicide course since politicians started buying votes by taking advantage of the people’s ignorance and greed to get something for nothing, as well as the people’s apathy and indifference to what government was doing, as government strayed farther and farther away from constitutional principles.   The outcome was totally predictable.  A once-free America is broke and in very ill health.

Now, all of sudden the people wake up and say “hey!….. we want our country back!”  They want their country back after they have spent over 100 years growing weaker and more dependent on government, literally by the day.

How did America grow weaker?  Let’s start with the 16th Amendment that created the Federal Reserve (FEDS) and the Internal Revenue Service (IRS).  All your government did was to take control of the money in America (through the privately-held Federal Reserve) and assure the repayment of loans to the Public Treasury by the FEDS through the long arm of the IRS, the most vicious collection agency on the planet.  Then along came the Great Depression, and FDR instituted the New Deal and Social Security, both without the remotest constitutional authority.  We were well on our way to becoming a welfare and dependent state in the first third of the 20th Century.  The people were “hooked” on the mindset that government is the great provider.

In the 1960’s we got President Johnson’s Great Society and a massive expansion of American-style welfare.  Then, in the late 70’s we got the Carter years which lowered national defense in exchange for expanding the welfare state and instituting the Community Reinvestment Act that led to the great recession of 2007 and 2008.   Finally, Obama appeared on the scene and used the power of the public treasury to buy off even more of the electorate, the unions and his crony capitalism friends which is now leading to America’s national bankruptcy and financial ruin, if not the destruction of freedom and sovereignty.

Which brings us to 2012.  We have this wide range of conservative viewpoints looking at the prevailing Republican candidates and saying none of them are conservative enough to “….. get their country back,” not realizing that you can’t stop a supertanker on a dime, nor can you change a country’s direction in one election cycle.  This is naiveté on steroids.

And what did the conservative voters do in 2008?  They couldn’t stand the conservative moderate John McCain and voted in droves for Ron Paul or Chuck Baldwin in an ill-advised write-in campaign.  They might just as well have run a third-party candidate because the results were the same.  What did we get ….. a community organizer for President that has managed to greatly accelerate America’s demise.  The reality is, under his quote-un-quote leadership, we are going to get to “dead” a lot quicker.

In an irrational repeat of 2008, these wide-ranging conservative viewpoints are all over the place on who they think can lead the country in such a manner as to “….. get their country back,” but without regard to which candidate is most likely to beat the current inexperienced, apologizing-for-America, far-left fumble bum.  Many think that any one of the conservative candidates can beat Obama because his record is so tarnished, but it is simply not true.  It will take a very strong, experienced and cool-under-fire candidate to overcome Obama’s INERTIA, his giant campaign war chest and a mainstream news media that has sacrificed its honor, integrity and journalistic ethics in a seriously flawed, if not Manchurian, candidate.

And here is another fact that seems to escape the conservative electorate:  “….. there is no power in divided government.”  Right now conservatives control the House of Representatives and any of their initiatives to scale back spending and government are met with an obstructionist Senate, or the putative President.

Look what Obama, Pelosi and Reid accomplished when they controlled both houses and the Presidency?  Again, what did we get?  We got Obama Care, the Dodd-Frank law, stimulus bills that didn’t stimulate, massive new regulations, a debt and deficit from which we may never recover and a far-left appointment to the U. S. Supreme Court.

Unless the conservative movement in America gets its head on straight and unites with determination, en masse, to take control of both houses and the presidency, they will once again be faced with divided or a liberal government and none of the initiatives to roll back spending, or make government smaller and taxes lower, will ever occur.  There will be no “….. taking their country back” as they desire.  Did you know that is exactly what the left is saying.  They too want “….. to take their country back.”  Both sides can’t be right.

There are only two candidates for president in the Republican primaries, as flawed as they might be, who have a prayer of beating Obama and can and will work towards “….. taking our country back” when they become president.  If the lion’s share of the conservatives don’t know who those two candidates are, then America and Americans are in more trouble than they can imagine.  The rest of the candidates will turn off the independent voters and will give the election to Obama.  And you can take that to the bank.

Now if conservatives are successful in taking the presidency but not the Senate and the House, they will find themselves stuck in the quicksand of divided government again and the efforts to make our government smaller and leaner will have to be put on hold indefinitely.  The election of 2012 may be the last chance to save our Republic.  This election is that important.

Think about it!  Do you really want your vote to count for four more years of a man and his wife who hate America and are doing everything in their power to destroy her?

The inertia of an aging America is great indeed.  To change it will take not only commitment and dedication by tens of millions of Americans, but it will also take massive amounts of organization, energy ….. and money!  No, you can’t forget money!  If anyone thinks they can “….. take back America” on the cheap, they are sorely disillusioned.  If anyone thinks that America will be healed overnight because conservatives are in control, they are drinking the Kool-aid and are doomed to perpetual disappointment.  It could take decades to change the suicide course that America is on.

We must accomplish the job of restoring America peacefully, and the only way we will be successful is by slowly but surely, over time, weaning Americans off the government “pig trough” and getting them to be self-reliant and independent again.  It will be anything but easy.

Ladies and gentlemen, the laws of physics tell us that you can’t stop a supertanker on a dime, you can’t stop an avalanche by getting in its way, and you can’t change a government in one election cycle.  It takes lots of energy to stop a supertanker and it takes insanity to get in the way of an avalanche, but it takes dedicated energy, money and lots of time to change the direction of a country that is hell-bent on destroying itself.

“The Parallax Prophecies” predicts that if conservatives do what they did in 2008 and shift their vote away from the chosen conservative candidate for president, no matter who he is, or even conservative candidates for the House and the Senate, they are quite apt to, NO!, they WILL get the same results.  Liberals will still be in control.  They will either get an Obama for four more years, or they will get a divided government.  Unfortunately, the truth is, a divided government will not yield the political power required to make the changes necessary to return America to a Constitutional Republic, the form of government that was the intent of our Founding Fathers and which provides the greatest individual freedom and the irrevocable protection of life, liberty and the pursuit of happiness.  It’s either ALL, or it’s NOTHING.  Halfway won’t work.