BUT WHERE DO “WE THE PEOPLE” STAND NOW? 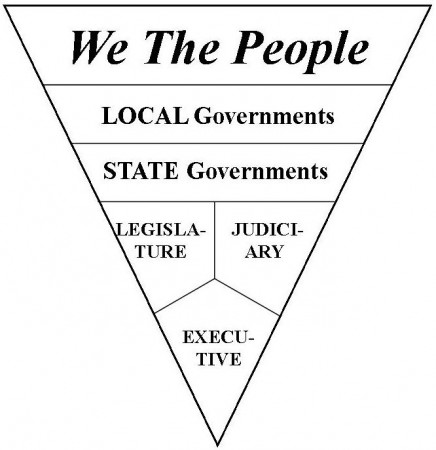 OBSOLESENCE
(The process of becoming no longer in use or of being useful:
OBSOLETE – replaced by a better idea)

This ‘new idea’, a Constitutional Republic, where the People had the final say – according to an agreed-upon (and sworn-to) set of rules and standards to guide them. A new and better idea that turned the old way of doing things UPSIDE-DOWN!

The ‘Rules’ that all public servants and the military swear to (i.e. the Constitution: Declaration + 7 Articles and 27 Amendments) – those ‘Rules’ have not changed, but the ‘Standard’ by which we apply them apparently has – thereby rendering those ‘Rules’ almost OBSOLETE, as we reintroduce destructive democracy (which always descends into anarchy), – and BIG Government.

Recently, Glenn Beck called for a re-establishment of the STANDARDS by which the RULES are applied. So I have herein provided some thought on the contents and look of that new STANDARD for obsolescing BIG government and creeping democracy.

Top: The pyramid that still tops the Washington Monument obelisk, with the words LAUS DEO (Praise GOD) emblazoned on it.

Center: An inverted (UPSIDE-DOWN) pyramid, standing on its point, representing the ‘Rules’ by which the Constitution is meant to be abided.

Cutting across the bottom point would be a wide and solid cross-arm, indicating the Standard for Public Servant Number One’s job, the EXECUTIVE, with the following words emblazoned on it:  ARTICLE II, Section 1:  natural born Citizen

Finally, the stout staff upon which all this is mounted would be a multitude of 34 fine strands – representing The Declaration and the 7 Articles + 27 Amendments (so far), that have held this inverted and upside-down pyramid upright for over 200 years!

This treatise is a request for all you artists out there to help design this newly reprised STANDARD for the RESTORATION OF OUR CONSTITUTIONAL REPUBLIC.

Please submit your image to me at NBTurner@Earthlink.net, so that we can use your ideas in the struggle ahead.

In the meantime, let us continue to do everything* we can to keep Obama’s name off the ballot in the primaries and/or the general elections of 2012, so that the cross-arm and the supporting staff can remain intact; for without them, our upside-down pyramid will surely fall.

In Liberty and in Truth.

Neil B. Turner
Citizens for the Constitution
NBTurner@Earthlink.net

*  Uphold your oath to support and defend the Constitution. No Person except a natural born Citizen shall be eligible to the Office of President. Obama is not a natural born U.S. Citizen, so his name must not be on the ballot in 2012. www.ObamaBallotChallenge.com.

The Constitution Rendered All Other Forms of Government Obsolete added on Friday, December 23, 2011