ARE THERE TOO MANY LAWS AND NOT ENOUGH DEFENDERS OF FREEDOM?

by Ron Ewart, ©2011, from The Parallax Prophecies 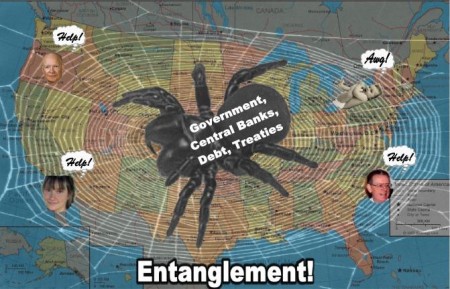 1. To twist together or entwine into a confusing mass; snarl.   2. To complicate; confuse.

Entanglement – “an intricate trap that entangles or ensnares its victim.”

Ever since the dawn of American civilization, man continues to wrap himself up in complexity.  This behavior has all the earmarks of a subconscious death wish.  Government writes legislation that is over 2,000 pages  (i.e., Obama Care, Dodd-Frank Bill, etc.).  In contrast, some of the largest novels ever written were only about 1,000 pages, single spaced.  We have hundreds of bureaucracies, at all levels of government, writing hundreds, if not thousands of pages of rule, after rule, after rule ….. every day!    The Constitution is only about 20 pages.

On the international front, we have entangled nation-to-nation Central Banks, the IMF, the WTO, NGO’s and thousands of treaties that further tie civilization up in knots.  You can’t move sideways without running into a rule or a law, national or international.  Most people are law breakers because of too many laws but they don’t even know it, much less care.   These national and international entanglements are slowly obliterating American sovereignty and freedom, right under our noses.

Is this by design, or by stupidity?  There is strong evidence that too many laws is by design, a plan to control the masses.  Remember, the definition of entanglement is “an intricate trap that entangles or ensnares its victim“, not unlike the spider and his web.  You don’t need guns to control the population.   You just need lots of rules and a bunch of obedient, compliant, brain-dead people who will religiously obey all the rules.  But as we wrote in a previous article entitled, “Every Time a New Law is Written”, “as laws increase, after a certain point, order begins to break down under its own weight of the people trying to comply with often conflicting and confusing laws, codes, ordinances, regulations and acts.  And worse, the more laws there are, the more opportunities for emotionally and financially draining lawsuits between aggrieved parties, egged on by lawyers who make their living off of human weaknesses and interpreting laws that no one else can understand” ….. a police state in the making.

The hard fact is, you don’t have to be a genius to remove complexity.  You can, with a concerted effort, start to lower the complexity in your own home.  Remove the sidetracking interferences in your life and get back to being a family again and lowering your stress level at the same time.  Who knows, you might even live longer.

Once you have done that, you can petition or lobby local government to decrease their complexity by getting them to refuse to comply with state or federal government mandates that are too complex, make no sense, or are un-funded.  You can get local governments to cancel their contracts with international groups, like the International Council on Local Environmental Initiatives, or ICLEI, a UN organization that is shoving very expensive, anti-American, anti-constitutional environmental agendas down the people’s throats.  You can, that is if you have the will, commitment and determination, nudge your city or county towards independence and liberty that override constitutionally protected property rights.  If enough cities and counties declared their independence from the state and the federal government, the movement would grow across the country and state.  The result would be that state and federal control over local communities would begin to decline.

The sad state of affairs is however, that people are so busy with their own complexity and entanglements, they don’t have the time or the interest in lowering the complexity and entanglements of their government, no matter at what level.  As the complexity and entanglements increase, most people just roll over and say, “Well, that’s life in America, what can we do about it?”  That’s what the Germans said when Hitler told the German people that they were superior to any other race and rationalized the killing of 6,000,000 Jews while attempting to conquer the planet.  That’s what the Ukraine people said when Stalin starved 14,000,000 of them ….. to death.  Naive fools ignore complexity.  Disengaged idiots blindly believe government propaganda, at their own peril and fork over their money in the form of taxes that enslaves them.

We ended our previous article entitled, “Every Time a New Law is Written” with,

“There is an inviolate law in nature.  Complexity in organisms can lead to the emergence of order.  Biological evolution and diversity on Earth is a result of that law.  However, it has also been shown that too much complexity in these organisms, in almost all cases, leads to chaos and finally extinction.”

“Ultimately, if America continues on the path it treads, we will become as a rogue spider, spinning a web from which we shall be forever “entangled“.  Could that be our final destination?  Are we to choke on our own obsessive/compulsive drive to complexity, or can we learn from the laws of nature?”

Entanglement, if allowed to grow, is the death of independence, sovereignty and liberty.  Americans either extricate themselves from this complexity and entanglement, caused by government and national and international moneychangers and power brokers, or they will lose their freedom, or worse, even their lives.

NOTE ON LAST WEEK’S COLUMN: In last week’s Parallax Prophecies column we made a call for leaders to help launch our NRC project.   Not a single individual contacted us with even the remotest interest in what we were trying to accomplish.  For that reason we have shut down the NRC project.  Over the last seven years we have launched several initiatives to try and get people involved in SAVING THEIR COUNTRY.  None of them have taken root.  Either there are no leaders in our audience or people are just too scared or otherwise involved to care.  However, we did receive two responses telling us that all is lost and the only thing that will save America is revolution.  Here is one of those responses:

“All the points of your article are valid, all accurate – BUT, and herein lies our problem really – in days of old there were leaders of courage, character, quality, whose primary concern and interest was protecting this nation and leading people for right and good.   We have NO SUCH LEADERS today.  We have many people who write of the problems, many who speak of them with articulate messages, but NONE who will organize a battle against the crooks aka government.  This like all other condemnations of our government and review of our problems is just more words.  They have been said a million ways and times, and STILL we do nothing.  There is but one way to solve the problem and no one, NO ONE wants to speak of it, much less organize to do it.  We are talkers, not doers and therein lies the foundation of the problem – and why its been festering and brewing for many decades!  Yes government is the source of the on-going problems, having grown them for longer than most of us have been alive.  BUT, the root cause is the inaction and lack of attention to these issues and now they and their perpetrators have grown so huge we are left with but ONE option and no one wants to even think about that, much less prepare for it.”

Is this responder right?  You decide!

Given our experience over the last several years with attempts to get people involved, we will be launching no more initiatives to help save America.  It’s a waste of our time and at our age we really don’t have time to waste.  We will however, continue to publish our column and we will be just one of the writers who write about the problems, knowing full well America is not yet ready to save itself.  Hopefully, Americans will get smart before, as Churchill put it: “….. You may have to fight when there is no hope of victory, because it is better to perish than to live as slaves.”

“The Parallax Prophecies” predicts that most Americans will just accept slavery without a fight, just as long as they are comfortable and can receive their government handouts, TV’s, Xboxs, cell phones, iphones, ipads and Dancing with the Stars.  That will work for awhile, that is until the country goes broke, like Europe is going broke now and all those government handouts dry up, marshal law will be declared because of nationwide riots and the people will end up having to fend for themselves again, like it used to be under our old Constitutional Republic.  Except that, now, fending for ourselves will actually be more like chaos and anarchy, as only those with guts and guns will get to eat.  The rest will just be victims, much as they are now.  After all, they are putting up with TSA pat downs and x-rays when they fly and a police state ….. for government-mandated security in place of liberty.   They roll their eyes when you talk to them about freedom, liberty, property rights and privacy.  Then they vote for the very same people that put them in chains.  Geniuses?  Hardly!  Fools?  Obviously!   Our ship of state cannot long endure a crew of blind fools.

Next week “The Parallax Prophecies” column will ask the question “Is a Free America an Anachronism?“

Entanglement – The Death of Independence and Liberty added on Sunday, December 11, 2011

One Response to "Entanglement – The Death of Independence and Liberty"