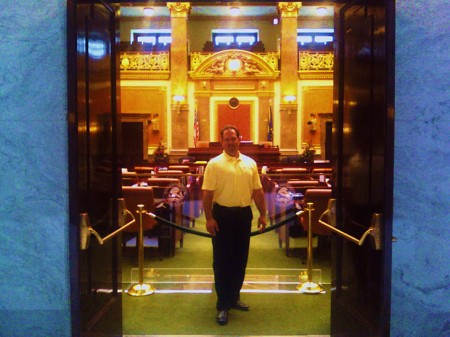 The Media spotlight of the GOP Debates and Republican Campaigns for President are sizzling with excitement.

The pendulum key of our National Security and Economy that is given to the President by order of our U.S. Constitution’s demand for a natural born citizen has been forsaken by all of these spotlighted Candidates and their Campaigns except for one.

The Political arena has succumbed to the richness and the feverish pitch which provides the attention and hype the 2012 candidates for President have craved and worked for.

With so much attention going to Obama the past couple of years, the debates have provided the balm for the attention deficit disorder; however, they have also provided you with the clear picture upon which the candidates for President in the GOP stand on Obama’s eligibility.

The Cody Robert Judy for President 2012 U.S.C. Eligibility Campaign has accomplished just the opposite; and we’d like to inform you of the political paradigm that makes this campaign the most important one when it comes to our current Constitutional Crisis and the A.D.D. of all the Republican Candidates.

Instead of sweeping Obama’s U.S.C. eligibility demand under the carpet in order to bask in the Media’s attention, the very name of Cody’s Presidential Campaign brings to your attention the Constitution and effectively Obama’s eligibility.

To understand the work and courage behind Cody’s Eligibility Clarion Call would fill a volume that will be shared by our future generations as pivotal in United States history, however, we don’t have time here, so let’s break it down to bare bones, which you can grasp in a few bullet points.

As candidly and transparently as possible let’s shock you with a revelation; the GOP Candidates cannot legally defend the Constitution’s eligibility requirement from Obama without committing what is termed a hate crime.

In crime and law, hate crimes (also known as bias-motivated crimes) occur when a perpetrator targets a victim because of his or her perceived membership in a certain social group, usually defined by racial group, religion, sexual orientation, disability, class, ethnicity, nationality, age, gender, gender identity, social status or political affiliation. Here’s how Obama has used this to silence the GOP Candidates.

The Republican Nominee Sen. John McCain was born in Panama, which is a foreign nation. He was not born in a military base hospital but in a Panama’s hospital and his citizenship was granted to him 11 months after his birth by an Act of Congress specifically for the Panama Canal Zone in a process we call naturalization, or in other words adopted as a citizen the same as any other immigrant applying from Panama or any other foreign country would be.

In 2008 all of the Republican U.S. Senators, accept Sen. McCain, voted for non-binding U.S. Senate Resolution 511 which announced to the world Sen. John McCain was a ‘natural born citizen’. This was co-sponsored in a Democrat controlled U.S. Senate by then Sen. Hillary Clinton and Sen. Barack Obama.

Cody Robert Judy was the only Presidential Candidate in the 2008 Class of Presidential Candidates to oppose this legally in the Federal District Court in Nevada prior to Sen. McCain being made the Republican nominee; that law suit also objected to Sen. Barack Obama’s Eligibility as Kenyan Born and to a father who was not a U.S. Citizen and a mother not old enough by law to confer U.S. citizenship.

There is no Presidential Candidate no matter how popular or politically experienced that can survive the legal rationale of racism. The media, amenable to slander, aired such claims with ABC’s Whoopi Goldberg, NBC’s Lawrence O’Donnell, and CBS News host Bob Schieffer against Donald Trump capable of suing them in court for slander, who also incidentally received a new 65 million dollar contract after bailing out of his toe-dip Presidential run, providing the stage for Barack Obama to release his long form fabrication i.e., birth certificate.

For a Racism or Hate Crime to be justified on a third party, one must first have 2 opposing parties with which to discriminate. In the 2008 Presidential Field, we had Sen. McCain and Sen. Obama both constitutionally unqualified. By giving McCain a pass for being a natural born citizen, albeit unconstitutional, and his being a foreign born naturalized citizen by not 1 but 2 Acts of Congress, the legal assumption would be if you didn’t give Obama the same pass he would have a claim of being treated differently under the exact same laws, justifying a legally abusive verbal ‘hate crime’.

That is right; Cody Robert Judy stands alone on being legally able to bring Obama’s Eligibility up as a grievance to Congress and in his campaign, made possible by his Constitutional Stand against both McCain and Obama. Do you see any reason to support Cody’s Campaign yet?

Now you understand why 3 major media outlets are afraid to let Cody’s Cat out of the bag so-to-speak and why it is so very important for you to support Cody’s U.S.C. Eligibility Campaign for President.

Will you please join Cody Robert Judy’s defense for the Constitution regardless of your party affiliation?

That is our question to you because as American’s we all have the Constitution in common regardless of party affiliation; you can do it with one candidate who has the law on his side, a record to withstand the racist charge, and at the same time is preserving and protecting the United States Constitution as a President should be.

While some have used Cody’s not being elected to any office in the past as a claim of his not being qualified, we recall Cody is more Constitutionally qualified than the present occupant of the White House, and Obama’s voting ‘present’ as a Senator certainly didn’t act to qualify him, and by no means is any Governor running prepared either for the vast differences of any particular state compared to the Nation as a whole, but Cody has the record of preserving and protecting the United States Constitution that we want in a President.

We all know that when called upon any one of the candidates with the GOP would likely be honored to serve in Cody’s Cabinet just as Gov. Jon Huntsman served in Obama’s after all we are all concerned about our Country, but to honor our Constitution that unites all of 50 States, don’t you think rewarding a man whose defended the Constitution’s key to our National Defense and Economy makes common sense and more importantly will put Washington, DC on notice that We The People are in fact in charge?

Editor’s Note:  The Post & Email does not endorse candidates for any office.  Here, we have reproduced Mr. Judy’s address to fellow Americans because of its focus on the Obama eligibility question, which The Post & Email has covered from its inception in late 2009.  The solicitation for donations is Mr. Judy’s alone.