IS ISOLATION AS A TACTIC ANOTHER MEANS TO TEAR APART AMERICA?

by One Pissed-off Vietnam Vet 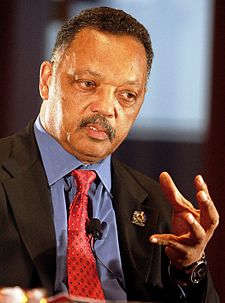 Has Jesse Jackson perpetuated racism or helped to eradicate it?

(Oct. 6, 2011) — The odds-makers in Las Vegas would like nothing better than to have an “Easter Egg” bet. that’s the kind of bet when the chances of a winner (someone finding an egg) is so close to zero that they don’t even bother fixing the odds; they let the person making the wager do it for them, and the most perfect example of such a bet would be the “Peace in the Middle East” bet. You can go to a bookie in Vegas and put down a $2.00 bet and set the odds at a million to one, no, let’s make it fifty-million to one that there’ll be peace for Israel in a year.  No, let’s make that ten years. Believe it or not, bookies, unlike politicians, have a conscience and would refuse the sucker bet and try and talk you into the chances of the Illini winning the National Championship next season.

Making a deal with rational people is difficult enough, but even they know that when “it’s over,” it’s over. When World War II was over, even the most ardent die-hard Nazi realized that the concept of a “super race” was off-base and admitted defeat. “Jewish science” and book burnings hurt the Germans a lot more than it helped them.

Trying to reason with irrational beings is a mental exercise similar to herding cats: it’s just not going to happen. We have certainly seen evidence of a failure to reason with the Islamic Nations in regards to Israel. A prudent people would have accepted Israel, and then gone from there. There is no pressing need on Israel’s neighbors to interact with them if they wish not to: in fact, the countries surrounding Israel could ignore Israel completely and go on with their lives, never mentioning Jews, rather than the irrational behavior which consumes them and prevents them from accomplishing anything worthwhile. Obsession with hate ought to end sometime, one would reason.

I am part American Indian and my tribe was, as all other Indian tribes, treated pretty poorly by the victors of the Revolutionary War, but that’s over and done with and even I, and what’s left of my tribe, understand and accept the very real concept “to the victor go the spoils.”  Realistically, I suppose, had the American Indians pooled their resources, they could’ve “discovered” Europe.

Beliefs based on perceived facts are a lot easier to understand  than the opposite, meaning that notions of acceptance due to expediency and ease of understanding trump effort and reason. In America there’s a whole institution based on the concept of “race,” and it’s big business. There are uncountable ways for a minority to be exploited, but the most devastating is that of separatism by such obvious examples of speech, education, and social behavior: Ebonics, “Uncle Tom” syndrome (acting “like ‘Whitey'”), and violence as an acceptable problem-solving method (even though blacks make up about 13% of the population, 80% of the prison population is black). Too bad, because the separation of a sub-group is detrimental to the advancement of the parent group; just ask any Nazi about the atom bomb.

Our Department of Justice, run by Attorney General Eric Holder, purposely perpetuates the myth of racism (Black Panthers and The Nation of Islam), thereby feeding the flames of stupidity and ignorance that hurts everyone in the long run. Holder can lie all he wants, but lies can’t make pigs fly, just as racism can’t survive with effort and reason. Racism is nothing more than an excuse for failure.  Just visit an Indian Reservation if you don’t believe me, or a Palestinian camp, or listen to Louis Farrakhan, Jesse Jackson, or Al Sharpton.

One Response to "When Pigs Fly"