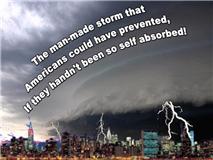 (Sep. 18, 2011) — Summer is essentially over and the barbeques, beer and block parties are winding down, as people get back in the groove for school and prepare themselves mentally for the eventual cooling of fall and the bitterness of a harsh winter.  The informality of the warmer weather falls away and is replaced with pressed suits, starched shirts, conservative ties, high heels and business dresses.   A self-absorbed America is humming along as it usually does, somewhat oblivious to the man-made hurricane that is hovering just over the horizon and threatening to come ashore.

Meanwhile, the poor put on warmer clothes to head for the welfare office where Obama’s stash is sitting there in vaults to be doled out to those who have lost their personal pride, self-reliance and claim no responsibility for their actions or consider themselves victims of discrimination or some societal-inflicted injustice of one kind or another.

Long-haired hippies, locked forever in the flower-children 60’s, live for their next weed.  Cocaine, heroin, or meth addicts think of ways, legal or illegal, as to how they can fund their next “high.”  The emotional toll on individuals and families and the cost to treat illegal drug addiction is virtually immeasurable.  The result of America’s collective addiction causes uncontrollable and brutal drug, gang, money and weapons wars in Mexico and beyond.  It further triggers beatings, murder and decapitations north and south of the border, all because of self-absorbed Americans who give up self-discipline and the drive for excellence and goodness in exchange for numbness, debauchery, self-deprivation, self-loathing and just possibly, self-destruction.  For those of you engaging in this filthy habit, the deaths of thousands of innocents falls on your shoulders.

Then there are those hordes of hapless peasants and other miscreants (or terrorists) who are lured across our borders by economic magnets that our government creates by not enforcing our laws or adequately defending our borders.  These peasants, who come from predominantly socialist countries, or those ruled by dictators, can’t wait for amnesty so that they can then vote for liberals who, out of irrational compassion or on the hunt for votes, dole out benefits from the public treasury to the hungry mouths of the panting peasants, thereby increasing our national debt and exploding annual deficits and creating more dependent-on-government Americans who vote for liberals.

Oh, and let’s not leave out the Wall Street types and investment bankers who live in a fast-paced world that would drive any sane person nuts, where right and wrong become blurred by a fast buck and corruption is the rule rather than the exception.  Hail to Bernie Madoff, default swaps and derivatives.

And let us not forget the government union workers who think they are entitled to the fruits of everyone else’s labor, even if there is no way for the taxpayer to keep up with rising union demands.  If the unions don’t get their way, they whine, complain, go on strike and ignite noisy and sometimes violent protests and riots.  So much for peaceful assembly.  They then blame the Tea Party people for being racists, bigots and union busters, or tell them to go to “hell” or call them S**s.

Seniors, now hooked on Social Security and Medicare, get their backs up when anyone has the audacity to mention that these programs are indeed Ponzi schemes and are destined to collapse under their own unsupportable weight in the not-too-distant future.  Hell hath no fury than a dependent senior scorned.  They come out by the millions when their unsustainable largess is threatened, egged on by AARP who never saw a “buck” or a social program (Obama Care) they didn’t like.

Politicians exist in their perception of an elevated world of self-importance and self-aggrandizement and think that what they are doing is noble and the most important job on the planet.   They salivate at public attention and position themselves to be in front of a microphone or a camera so that they can say something profound and meaningful and make us all vote for them…again!  They then go to their respective legislatures and argue amongst themselves over which piece of legislation will get them the most votes so that they can remain in their cushy jobs in perpetuity by buying off or duping a hopelessly self-absorbed or naïve electorate.  Then there are the dinners, junkets and payoffs, all on the up-and-up, don’t you know.

Underneath all that is the rest of the population going about their business of raising kids, work and play.  They run around with deep-seated thoughts of what is right or wrong about government, their spouse, their kids, their job and their boss, and very few will tear themselves away from “Dancing With The Stars” or a football game to actually research the facts.  But just ask them.  Boy, do they have an opinion, and your opinions better agree with theirs, or they might just come to blows.  Just try bringing up a political subject at your next neighborhood block party and see what happens.  Ignorance, naïveté, apathy and blind, uninformed opinions abound.

But what doesn’t enter their minds is the possibility that this ship we are all riding on is sinking and sinking fast.  It would be like the people on the Titanic, after it hit the iceberg and is slowly sinking, drinking, dancing, drugging, or sleeping, while the ship slips into the briny deep and sends the nonchalant passengers hurtling into the frozen waters where an icy death awaits them.  Is that being self-absorbed or just plain dumb?

The reason for the sinking this time is not an iceberg.  It is a man-made calamity, based on a failed international social policy, that is whipping up a financial hurricane of epic proportions, destined to destroy everything in its path all across America, and the government, FEMA and the banks won’t be there to give assistance because they are all broke.  In this final hurricane it will be every man or woman for him or herself, running every which way in a panic, falling easy prey to the profiteers, the con men or the jailers.

Isn’t there something wrong with this picture?  Is it any wonder why America and Americans are so divided?

Are there exceptions to these groups of people?  You bet, and it is those exceptions that may just save our Republic.  One of the most notable exceptions is our brave souls in uniform who put their life on the line for us.  (No, they are not perfect.)  The other exception is the Tea Party people.

Ask yourself?  Can Americans really be so self-absorbed that they can’t see this killer storm on the horizon?  The answer is yes.  It’s human nature to ignore a crisis until the last possible moment, when there may be no chance for survival.  Graves are full of such people and cultures.

The question is, can those who know the storm is coming be able to get out of the way to save themselves?  Or, before the storm hits, can they exert enough influence on those who are causing the storm to slow it down, inhibit it, change its direction, or stop the storm’s effects altogether?

That’s right; you can go out and buy gold as an investment strategy against the coming economic collapse.  You can even stock up on food, water and ammunition.  You could move to a remote area of the country, that is, if you want to play cowboy or farmer for a while.  Or, you can plug up the hole that is flooding the compartments of America and keep the ship afloat, provided the damage is still repairable.

If there were a choice between digging a hole and crawling in or fixing the problem so that you don’t have to dig the hole, which would you choose?  There are some Americans who are not self-absorbed who want to fix the problem and put America back on the track to its original glory as a free and prosperous nation.  Those in the Tea Party movement are working towards that goal as we speak.  But those other self-absorbed people are doing everything in their power to tear the Tea Party down in order to defend their turf and ill-gotten gain.

What are you going to do?  Will you join the Tea Party, or go buy more food, water and ammunition?  Or, will you get down on your knees and pray that divine intervention will make it all right?  Those who dive for cover or just pray will not be the ones who will plug the leak that is letting the water in which will ultimately sink our ship of state.

In our considerable seven-year effort to help save the Republic, we have come up with one solution to help you and your family as well as a Tea Party or freedom group get-in-the-game.  We call this solution the “S-O-S Kit.”  S-O-S stands for the “S.T.A.R. Offense Strategy.”   S.T.A.R. stands for “Stand Tall American Republic.”  The kit gives you the tools to unite more Americans and empower you to fight back against those who manufactured this man-made storm that threatens to take away our freedom, dissolve our sovereignty, repeal the Constitution and eliminate the promise of our Declaration of Independence forever, the promise of life, liberty and the pursuit of happiness in America.  To learn more, just Google “STAR Offense Strategy” with quotes.

No!  The S-O-S Kit is not a panacea that will solve all of our problems.  It is only one of many tools that allow those who care about their country to make an attempt to shore up our hull and keep the angry sea from rushing in and taking us to the bottom.

Once again, the hard truth is, if we as Americans do not pull our heads out of the sweet, tantalizing, hypnotic aroma of self-absorption and join each other as Americans first in this fight to keep the Good Ship America afloat, she will break apart, implode, expel gases and gurgle in a death rattle on her way to eternity on the floor of the sea that is the final resting place for the bones of failed men, failed ships…and failed nations.